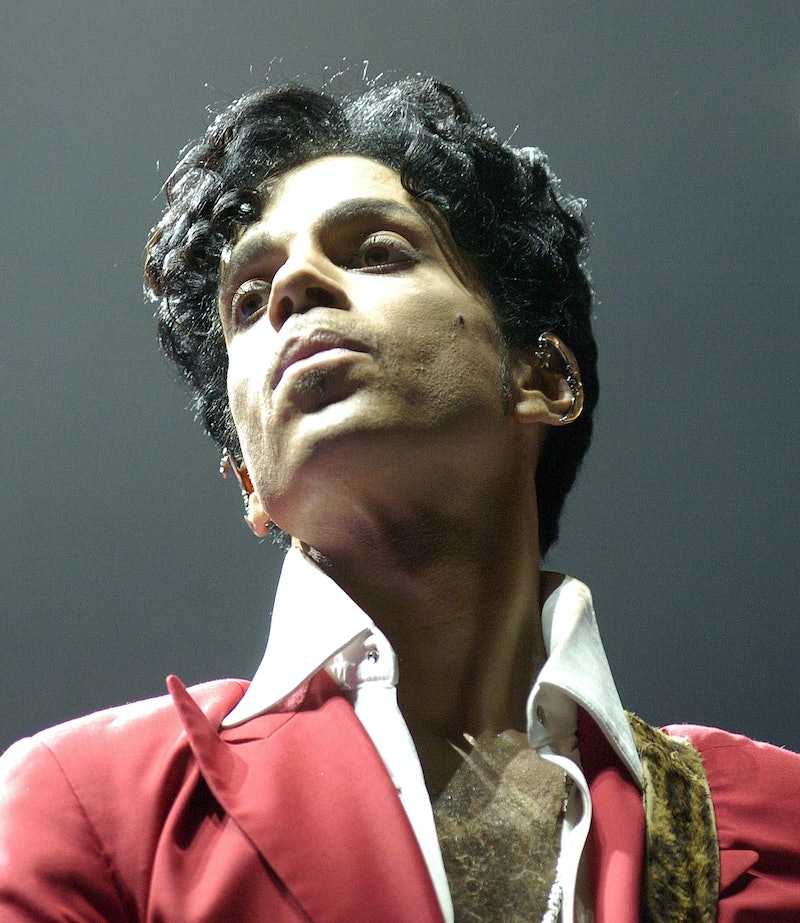 On Thursday, Apr. 21, reports surfaced that music and fashion legend Prince had died at the age of 57. His musical talent, his style, and his general artistry will be sorely missed by many. His life certainly deserves to be celebrated, and one can't do that without honoring his singular sense of style. Prince rocked some incredible suits over the years.

Prince's representatives confirmed his death in a statement to Bustle saying, "It is with profound sadness that I am confirming that the legendary, iconic performer, Prince Rogers Nelson, has died at his Paisley Park residence this morning at the age of 57." TMZ reported that the singer had recently been sick with the flu. After reports of the flu, the singer appeared on stage the very next day, reportedly telling the audience,"Wait a few days before you waste any prayers." So far no other details have been released.

When it came to fashion, especially his iconic suits, Prince was not afraid to make a statement. He experimented with metallics, colors, prints, everything. You name it and he could wear it. Rounding up his best suits is no easy feat since pretty much all of them were absolutely incredible. Prince was no ordinary man, and no ordinary ensemble would do for him. He's sure to be remember for his impeccable wardrobe, among many other things. Here are the 15 best suits he wore throughout his career.

Why go for a pop of color when you could rock an all green jumpsuit?

This was far from your average leisure suit.

This baby blue power suit was everything. Just look at those flared sleeves. Only Prince could pull off something this grand.

Leave it to Prince to bring the shine factor.

It just wouldn't have been fitting to wear a plain white suit. Oh no, for Prince, bring on the bling.

He slayed in this bold red suit.

Somehow, even a monochromatic outfit was far from boring when he was wearing it.

Seriously. Only Prince himself could pull off a bright yellow suit, you know?

He paired these pastels together so well.

This electric orange color was just so good.

He just wouldn't be Prince if he couldn't rock a color fit for royalty.

Just look at him working those wide leg pants. I love it.

There wasn't a single type of embellishment he didn't like. Ruffles, sequins, you name it.

This color color looks incredible on him.

Only the best would do for him, and a gold suit is about as good as it gets.

His undeniable sense of style is just one of the many things that the world will remember about the legendary Prince.