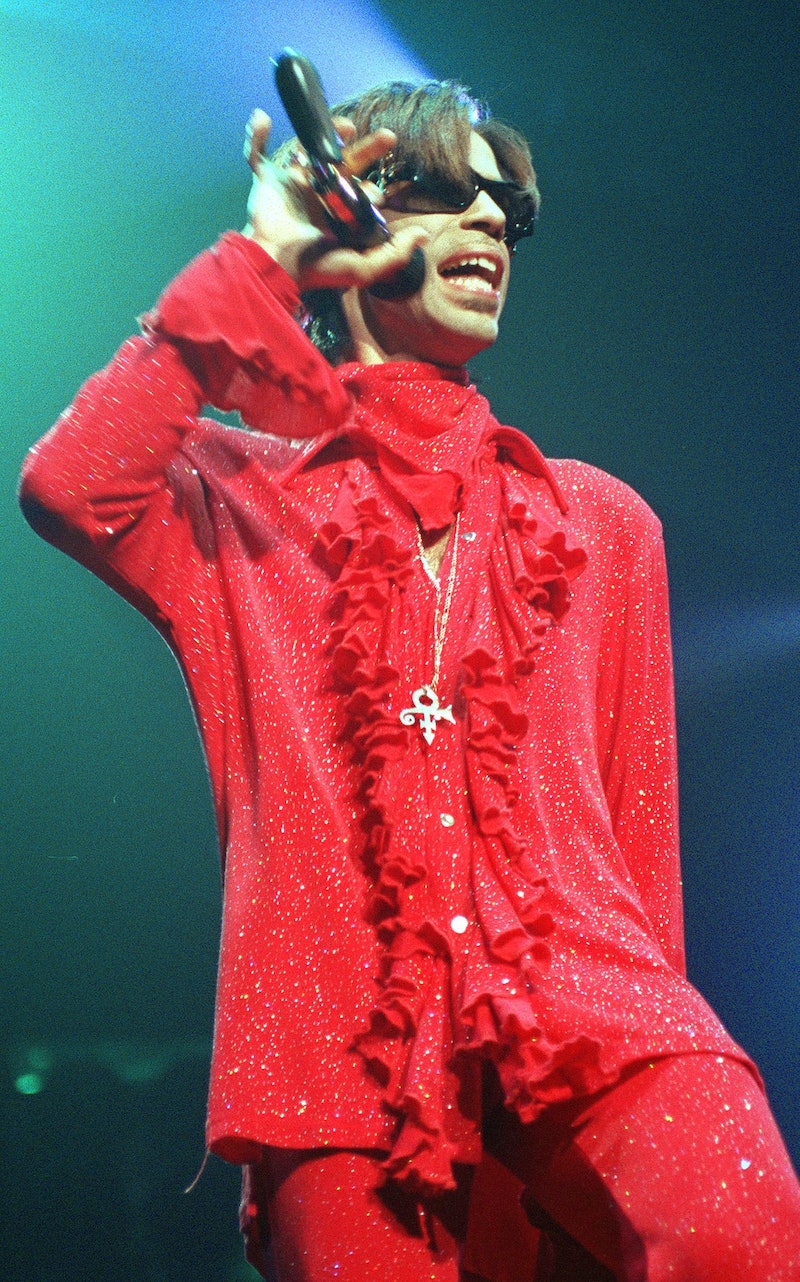 It's safe to say that 2016 has been a hard year for losing fashion icons. When we lost David Bowie, I remember thinking to myself, "at least we still have Prince." And then we didn't. Prince's publicist confirmed in a statement Thursday that Prince had died at his home. Bustle has reached out to Prince's representatives and the Carver County Sheriff's Office in Minnesota. As we wait for more details to come in, and as we let the news sink in, there's little more we can do than remember what it is about this legendary music and fashion icon that captured us, and didn't let go for decades.

For most people, of course, it will be the music. That alone was enough. He scored songs on Billboard's Top 100 dozens upon dozens of times, which earned him Billboard's Icon Award in 2013. That's just the tip of the iceberg of his musical legacy. But for many of us, he wasn't just a music icon. He was a fashion icon. He was someone who you knew was fiercely devoted to being himself, whether that meant performing in ruffles, high waisted purple velvet pants, or shirtless in white lace gloves. He toyed with gender. He used accessories to the point of performance art. And for being such a tiny man, Prince had a huge presence. Some of his most iconic looks came from the 1980's and 1990's from the time between exploding into the mainstream with Purple Rain and defying convention by changing his name to symbol. Let's look at some of his earlier stuff. The stuff that proved Prince was born to be a fashion icon.

1980's Prince was all about bold choices. The Purple One was fearless in his use of prints.

Those pink and brown damask pants, tho.

And sometimes it was just one bold print from head to toe.

Polka dots, be still, my heart.

When hair metal masculinity dominated (even if those guys were generous with the eyeliner and hairspray) Prince wasn't afraid to play with his gender presentation. He often mixed "feminine" elements into more masculine looks, like ruffled blouses with edgy leather, or pink fur boas with well-tailored men's suits. He carried this theme forward for decades.

3. And Then There Were Those Suits

Suits in every cut, color, print, and iteration under the fashion sun.

Such a good combo.

Prince's take on something a little more classic.

There was the fashion, yes, but at the end of the day, the accessories made a lot of Prince's looks truly memorable.

Accessories do the talking, while Prince does the singing.

Rest in peace, Prince. You paved the way for many of the bold, fierce fashions we see today, and you will be missed.