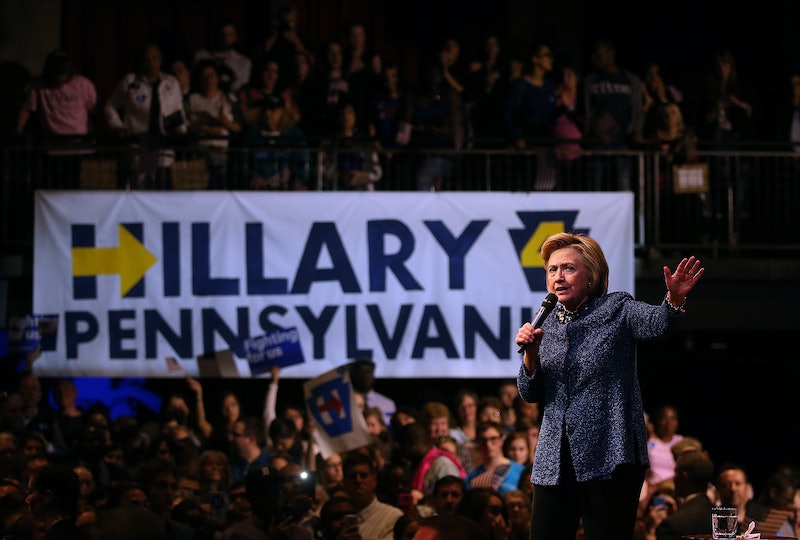 Coming off from a fresh New York win, Hillary Clinton still has her work cut out for her. On April 26, she has five whole primaries to get through. Among them is Pennsylvania's, and if you're voting in the Keystone State, you may be wondering one thing — will Hillary Clinton win Pennsylvania? The state is a big deal for the Democratic presidential candidates, as it holds the largest delegate selection out of all five primaries on Tuesday. There are 189 delegates up for grabs.

Clinton has already begun her Pennsylvania stumping. The former Secretary of State spoke to a large crowd in Philadelphia on Wednesday, and so far, the numbers are in her favor. In a Monmouth University poll from last week, Clinton boasted a double-digit lead over her rival, Bernie Sanders, scoring 52 percent over Sanders' 39 percent. The poll also shows 61 percent of women supporting her over Sanders. A Franklin & Marshall College poll released last week shows similar numbers, with 58 percent of voters preferring Clinton.

"After her win in New York this week, these numbers in nearby Pennsylvania suggest that the entire northeast is looking pretty good for the Clinton campaign," Patrick Murray, director of the Monmouth University Polling Institute, said in a statement. FiveThirtyEight's forecast for the Pennsylvania primary echoes his sentiment. The site calculates a whopping 96 percent likelihood of Clinton winning the state.

One aspect of Pennsylvania voting that may help Clinton really gain an advantage is the fact that the state holds a closed primary, just like New York. This means only registered Democrats may vote next week. The closed primary was one factor that some analysts think helped Clinton sail to victory in New York, whereas Sanders-leaning independents could not vote for him.

It also helps Clinton that Pennsylvania Gov. Tom Wolf has endorsed her. In a CNN appearance last week, he said:

I think Hillary was always going to do well in Pennsylvania, and she'll do very well ... New York, after all, is her home state, but she has strong family roots here in Pennsylvania. I think people are coming around to the idea that she is going to be the nominee.

As Wolf alluded to, Clinton does have a personal tie to the Keystone State. Her father grew up in Scranton, Pennsylvania and is buried there.

Is there a possibility for a surprise upset by Sanders? Maybe, but the Vermont senator shouldn't pin his hopes on Pennsylvania.

Pennsylvania's huge delegate prize would send Clinton leaps and bounds ahead of Sanders — and Clinton may already be sensing victory. In a speech in New York following her win on Tuesday, Clinton said, "The race for the Democratic nomination is in the home stretch, and victory is in sight."