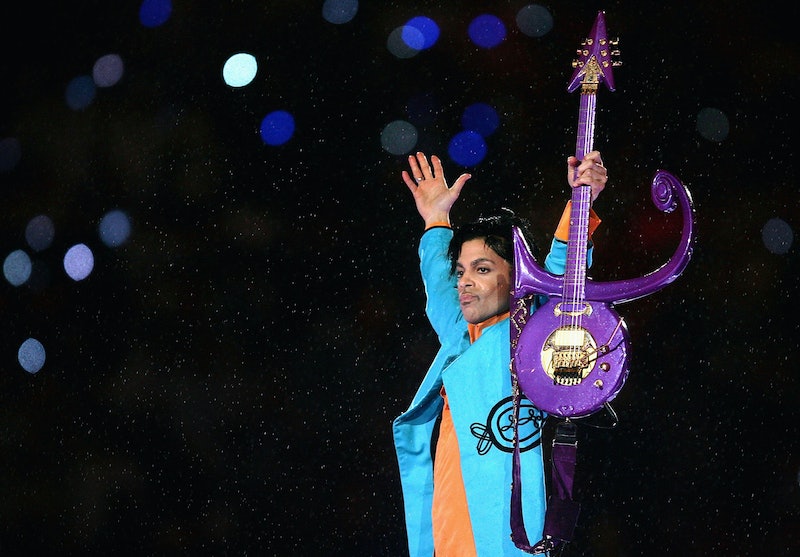 The world has lost another great musical talent. On Thursday, one week after TMZ reported that Prince was hospitalized for a case of the flu, his publicist revealed heartbreaking news: Prince has died in his Minnesota home. The musical icon was 57. The tragic loss has hit fans of the "When Doves Cry" singer hard, and has prompted celebrity admirers like Katy Perry, Lorde, and Laverne Cox to tweet their heartfelt messages about Prince's passing. However, one video from his own tribute to another fallen star might be the most ironic proof that the singer was made to make music. Prince's tribute to George Harrison proves that he will remain legendary long after his death.

Losing a unique, inspiring star like Prince certainly feels like there is a hole left in the music industry. He was certainly one of a kind, and will be missed by his legions of fans. There's so much proof that Prince was made for this industry, from his jaw-dropping performance at the 2007 Super Bowl to his film Purple Rain, but none resonate more strongly with me than his tribute to George Harrison.

The moment dedicated to fallen Beatle Harrison from 2004 was a collaboration between several iconic artists. Tom Petty, Steve Winwood, and Jeff Lynne all joined Prince on stage for a rendition of "While My Guitar Gently Weeps." Though each artist brought their own excellence to the table, Prince's solo around the 3:24 mark steals the show:

It's shocking and sad that Prince is no longer with us, but his legacy will live on. He has inspired a new generation of people with his music, and, though he may not be able to add any more work to his impressive catalog, he certainly has given us more than enough to enjoy for years to come. Here's hoping that Prince's own tributes will be worthy of his own immense talent.