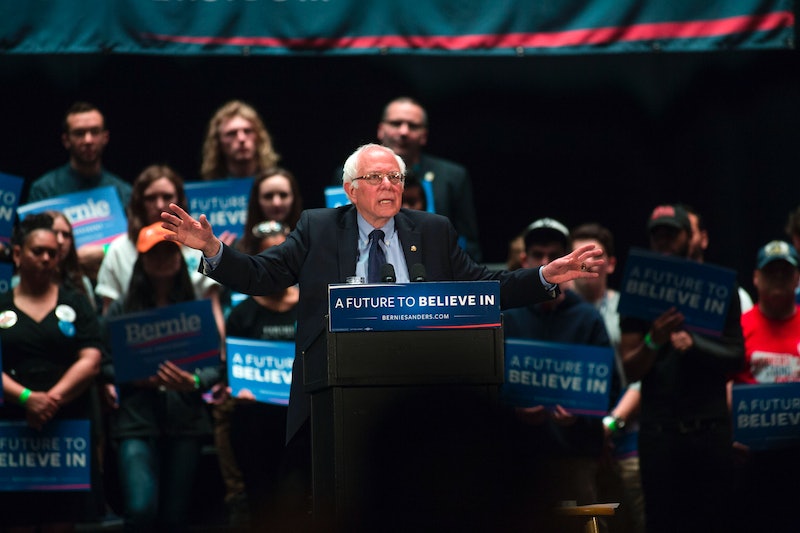 On Tuesday, several Eastern states will be holding primaries, including Connecticut, Delaware, Maryland, Pennsylvania, and Rhode Island. For Democrats, the combined delegate count for all these states is 384 total, which would offer either candidate a leap ahead depending on how many delegates they are each able to win. In Connecticut specifically, there are 55 delegates up for grabs, and it's a state that has centered on the importance of discussing and reforming gun policies. So how will the state vote? Will Bernie Sanders win Connecticut?

Ahead of Tuesday's big primaries, former Sec. of State Hillary Clinton held the lead over Sanders in Connecticut. According to the most recent Quinnipiac University poll, she has 51 percent of voter support, over Sanders' 42 percent. However, according to the same poll, 6 percent of Democratic voters are undecided, and another 18 percent noted that they might even change their mind. Among "very liberal Democrats," Sanders was ahead of Clinton (54 percent to 43 percent), although that's not totally surprising, as more moderate to conservative Democrats prefer Clinton by 56-36 percent. It is still uncertain, based on the most recent polling data, who might take the state, especially with the large percentage of undecided voters. However, because Connecticut's primary is closed, voters will have to choose a candidate within their party affiliation if they hope to cast a ballot on April 26.

When it comes to the presidential primaries in Connecticut, voters are hearing what Clinton has to say on gun reform, and it is resonating with them deeply. In December 2012, an armed gunman entered Sandy Hook Elementary School in Newtown, Connecticut, where he shot and killed 20 students, and six adults. This tragic massacre has had a lasting impact on the state and their hopes for gun reform, even now four years later, and has deeply affected the state and the national community.

Clinton planned a stop in Connecticut on Thursday ahead of the state's primary, where she honed in on the importance of gun reform. Erica Smegielski, who is the daughter of the principal who was shot and killed during the Sandy Hook massacre, spoke in a Hillary Clinton ad where she said, "Hillary Clinton is the only candidate who has what it takes to take on the gun lobby. No one is fighting harder to reform our gun laws than Hillary."

Sanders has not been quite as vocal on his gun control policy plans, which could be bad for him come Tuesday, in Connecticut. In fact, gun reform doesn't appear to have a platform on his website's issues page, where he outlines plans for gender equality, reforming wall street, and racial justice. However, according to a 2015 Gallup Poll on gun reform, 55 percent of Americans believe that gun laws need to be more strict.

Unless Sanders does some extra campaign work ahead of Tuesday's primary, it looks like he won't be winning Connecticut.