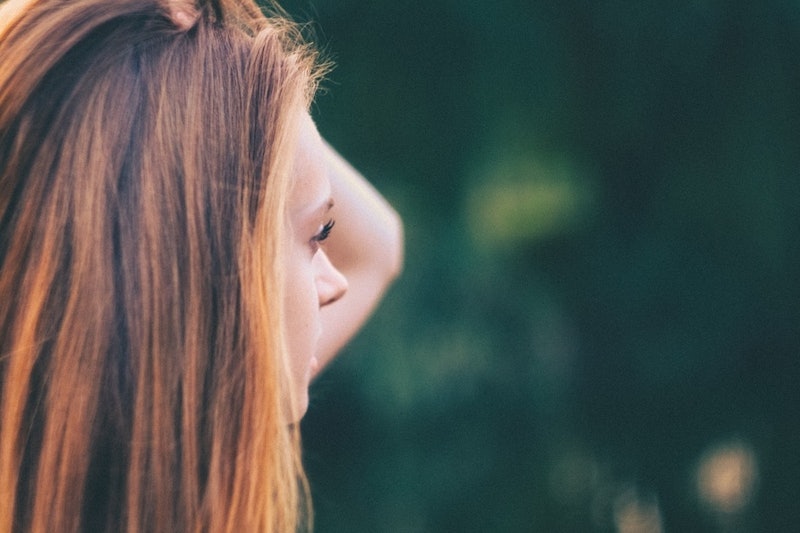 Our body goes through changes constantly, whether it's from our daily habits, what we eat, or even from the time of the month. But most of us don't pay attention to the various things that happen to our bodies when we are ovulating, and some of them can be quite surprising — and even very strange. Although most changes are related to our fertility, since we are at our peak fertility during this time, some of them result in thoughts and behaviors you would never expect, including what you look like to others and how you carry yourself.

So how do you know when you're ovulating? Figure it out by mapping out your period. "The first day of your menstrual cycle is considered day 1 of your cycle, and you ovulate 14 days before that," says Dr. Pari Ghodsi, MD, FACOG to Bustle over email. "So you can consider that day the day of ovulation for the next cycle. Your fertile days are typically five days before that and up to 24 hours after."

You may not be aware of them, but your body goes through a lot of funky changes during this hormonal stage. Here are 11 weird things that happen to women when they ovulate that you've probably never noticed.

During ovulation, you may find that you're feeling a little warmer than usual. But don't fret. "In most women, the body’s normal temperature increases slightly during ovulation (0.5–1°F) and remains high until the end of the menstrual cycle," says Ghodsi.

Maybe your body temperature has gotten you a little more pink in the cheeks than usual, but a study from the University of Cambridge found that women have the most facial redness during ovulation. However, this isn't detectable by the human eye, so don't worry too much about looking a little flushed.

3. People May Find You More Attractive

That rosy glow might have you looking more appealing to a potential mate. A study from the journal Hormones and Behavior found that men rated women's faces and voices as more attractive when they were ovulating. This makes sense biologically, as it is when women are the most fertile.

If you're dating a man, and you find that his smell is particularly potent a certain time each month, you're likely ovulating. A study from the journal Hormones and Behavior found that women who were ovulating were more sensitive to male pheromones and musky odors.

3. Your Sex Drive Can Increase

If you're feeling a little more frisky, it could be because of ovulation. "Multiple studies have shown a woman's libido increases around ovulation," says Ghodsi. Considering this is when we are most fertile, it's our body's way of increasing the likelihood that we try to have a baby.

"Some women have breast tenderness around ovulation, similar to what many experience with PMS," says Ghodsi. This can also include nipple soreness or pain on the side of the breast, likely due to hormones during this time of your cycle.

5. You Start To Use A Higher-Pitched Voice

According to a study from UCLA, women use a higher-pitched, more feminine voice when ovulating. Higher-pitched voices are associated with youth and attractiveness, which may be a reason we take on this habit without realizing.

Most of us like to claim we have a type, but when you're ovulating, all of that goes out the door. A study from the University of Texas found that women seek a greater variety of men when they're going through this stage of their cycle. So if you happen to be sexually attracted to men, you may be less picky while you're ovulating.

In the same University of Texas study, women also sought out a larger variety of consumer goods and services.

8. You Are More Open To The Idea Of Sexual Fantasies

Normally opposed to a random sexy night with a stranger? Ovulation may change that. A study from the Journal of Evolution and Human Behavior found that women were more open to the idea of more adventurous sex, such as one night stands or sex with an acquaintance, when they're ovulating. However, this didn't necessarily mean that their attitudes translated to more sex during this time.

9. You're More Likely To Wear Pink Or Red

Suddenly wearing all the colors in your closet — or, rather, just shades of crimson? A study from the University of British Columba found that women are more likely to wear pink or red clothing when they're ovulating.

10. You Have Fewer Asthma Symptoms

If you suffer from asthma, you may see a dip in your symptoms around ovulation. A study from the American Journal of Respiratory and Critical Care Medicine found that symptoms of wheezing and shortness of breath dipped during ovulation.

One study from the Journal of Marketing Research found that women attempt to boost their social standing during ovulation. Researchers gave women a fixed amount of money to share with other women, and those who were ovulating shared half as much as women who weren't.

Next time you have some weird attraction or heightened sense of smell, it probably isn't in your head at all; it could be an indicator that you're ovulating.