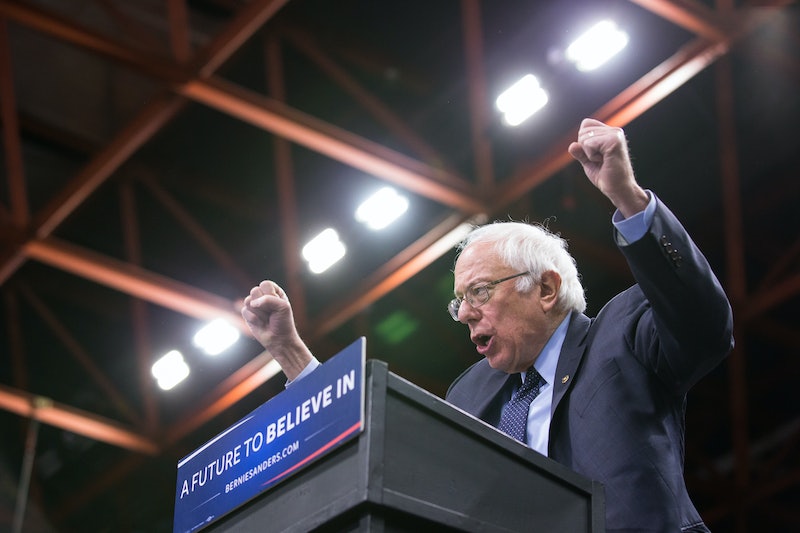 With delegate powerhouse New York behind them, the candidates have a renewed focus on the primary states that lie ahead. The delegates up for grabs this coming Tuesday will be an important (and for some candidates, perhaps final) push toward either securing the nomination, or fading to the primary dust. Among the five states voting on April 26, Pennsylvania in particular has seemed to catch the eye of the candidates on both sides of the aisle. But why is Pennsylvania's primary so important? Since leaving The Big Apple, the presidential hopefuls have been campaigning diligently in the Keystone State.

The big reason is the sheer number of delegates — 210 go to the Democratic candidates, while 71 are available for the Republicans — kind of. Although there are technically 71 delegates, 54 of them are unbound, meaning they can ultimately support whomever they want.

While 71 may seem insignificant compared to the Democrat's numbers, Pennsylvania still carries the largest amount of delegates by far for both sides. The 210 is a "yuuuge" deal for the Democrats as Pennsylvania takes the biggest chunk out of the 384 total that are available. Bernie Sanders would especially benefit from this win — despite building momentum from contest to contest, his loss in New York could signify trouble on the horizon for his path to the convention and eventual nomination.

Sanders appeared in the state at a rally on Tuesday, the same day as the New York primary, and Ted Cruz made his way to the state fairly early as well. With perhaps the most to lose, both Sanders and Cruz have taken opportunity to use the state to attack their opponents.

At a rally in Hershey, Cruz told a crowd of supporters: "As we stand here today there are two, and only two, candidates who have any plausible path whatsoever to earning the Republican nomination: me and Donald Trump. If we nominate Donald, Hillary wins — Hillary wins by double digits." Cruz has upped this type of rhetoric toward his opponent Trump in recent months, harrowing in on it even further after the real estate mogul's 45 point lead over Cruz in New York.

Sanders has also gone on the attack in the Keystone State. After collecting himself at home in Vermont after his loss in New York, some political commentators thought he would begin to go easy on Clinton, citing a need to unify the party around her come time for the nomination. But the Vermont senator doubled down on his tone at an event in Reading, calling Clinton out on ties to Wall Street and super PACs. Sanders knows that the blue collar vote could be an important one for him in the state, as his messaging largely caters to that crowd.

Pennsylvania could really be a make-or-break moment for both Sanders and Cruz. Without these delegates, their party's front-runners may have a much easier sailing to the nomination.