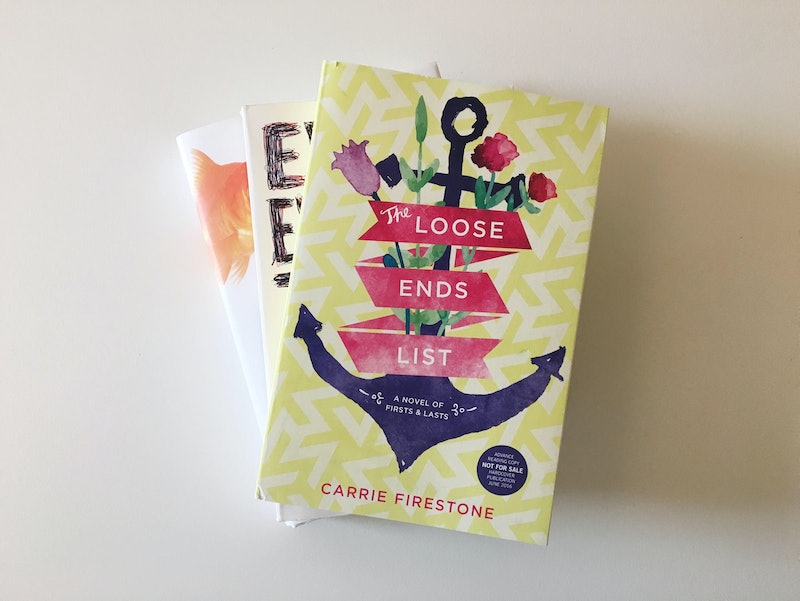 Maddie has big plans for her final summer before she heads to NYU in the fall: she wants to tie up all her high school loose ends and spend plenty of time hanging out with one of her best friends, her grandmother. But Maddie's plans come to a screeching halt when her Gran reveals that she has terminal cancer — and she's booked the entire family on a "death with dignity" cruise to.... celebrate? mourn? enjoy her final days? ride into the sunset on her own terms?

So Maddie and her entire, over-the-top, adorably lovable family embark on a worldwide cruise to give their Gran the trip of a lifetime. While aboard the cruise ship, Maddie figures out how to say goodbye... and finds comfort in the arms and lips of Enzo, a boy processing his own grief after the death of his father.

This unconventional fictional story was born from an unconventional real life tale. Firestone, a former New York City high school teacher, was inspired to write The Loose Ends List while on a five-week long cruise to Antarctica with her husband. Unfortunately, she never made it to Antarctica as she was forced to stop in Buenos Aires, Argentina for a life-saving surgery. It was then that she discovered that dead bodies are stored in freezers on cruise ships until they reach land. That grisly discovery inspired what would become a charming young adult novel about learning to love... and learning to say goodbye with dignity.

The Loose Ends List is a summer must-read and will be available everywhere on June 7. For a sneak peek, read the exclusive excerpt below:

I can’t sleep. I try to wake up Janie, but she slaps me. I curl up with my blanket on the balcony. Everything’s black: the sea, the sky.

My bee buzzes under my leg.

Hey Maddie. Any chance you’re up? I’m by the pool if you want to talk. Enzo (from the Jamaican pub earlier)

Oh my God. It’s him. It’s a photo on the bee of Enzo’s face with his adorable side grin looking up at me. I can’t believe he feels the need to remind me of where we met. I have to calm down. Janie would tell me to recite our favorite line, They’re just boys. He’s just a boy.

We're in the middle of a movie, but maybe tomorrow?

Sure! I’ll be there in a few minutes.

I throw on clothes and brush my hair and teeth, moving just slowly enough that he won’t think I’m too eager. I put on a little makeup so I don’t look like a pasty vampire chick and walk calmly toward the elevator. For a second I worry again that he is a patient. Maybe he wants one last fling before he goes. I don’t know what to think.

Wes and Uncle Billy’s TV is blaring through their door, but otherwise, everything is quiet. I take the elevator up to pool level. I walk toward the Grotto looking for Enzo and nearly trip over something hanging half off a lounge chair. My heart sinks. It’s Skinny Dave. He’s facedown, half on the chair with his legs sprawled on the floor. I can’t tell if he’s alive or dead. He reeks. I know Janie would probably shake him or check his pulse to see if he’s alive, but I cannot do this. I race around looking for someone to help me.

Enzo is sitting on the Grotto steps with his baseball cap and his seashell necklace and his smile. For a second, I forget Skinny Dave.

“Where? Show me.” I lead him to Skinny Dave. He immediately kneels next to him and feels for a pulse. I stand awkwardly, not knowing if I should hit the red emergency button on my bee.

“I think he’s just hammered, poor guy.” Enzo shakes him a little. “People tend to do that on the Wishwell.”

“Yeah, well, he’s definitely drunk. Go and grab some towels. We’ll get him straightened out.” I grab a stack of towels from the bin and lay them out on a chair. Enzo hoists Dave up and gently lays his greasy head on a folded towel. I cover him so his head is the only thing peeking out. He’s a sad, smelly little boy, curled up and snoring.

We leave him to sleep and go back to the Grotto steps.

“That was nothing. I’ve seen it all on this ship.”

“Me? I’m visiting. Francesca’s my mum. I come every summer and sail around for a few weeks, visit friends in Jamaica or Brazil. Believe it or not, this is my holiday, so I try to avoid getting involved in the scene here.”

“Wow. I guess I’m relieved to hear you’re not a patient.”

“That wouldn’t be fun, would it?” He pulls his chair closer so

we’re facing each other. “How about you? Your cousin said your gran is the patient?”

“Yeah. Pancreatic cancer. She told us about the cancer and the trip all in the same night. Oh, and she also introduced us to her long-lost Jamaican boyfriend. It was a lot of news to process.”

He laughs. “Well, that’s one way to get it over with.”

“True. But I think it would have been better to know about the cancer first. Even now, I hear about all the treatments these people have been through before they got to this point, with years of chemo or experimental drugs or whatever.” I stop talking, afraid for a second I might break down. “I just—I’m wondering if it’s too soon. Like she had it in her mind to do this, and she’s not even willing to try to live.”

He nods, and I get the feeling he’s heard this before. “It’s hard for people to know when to do the whole Wishwell thing. If it’s any help, I’ve seen the pancreatic people. It’s usually pretty quick.”

“So you’ve been around this stuff a lot.”

He nods again. “I’m sort of immune to it all. I mean, it’s sad, but the suffering is worse. I watched that part with my dad. We had heard about the Wishwell Research Facilities in the Pacific, where they experiment with revolutionary medical trials.”

“I just found out about the research facilities. I had thought the Wishwell was just a ship.”

It’s a little unsettling to be reminded that I have no idea what is on the itinerary.

He takes a drink from a plastic cup and holds it out to me. "Thirsty?” I drink from the same side he just sipped. I can taste the Enzo germs in the root beer.

“We went to the island when Dad was really sick, as kind of a last-​­ditch effort. But it was too late to save him. That’s when my mum had the ship idea. She wanted to create a place where people who were beyond repair could find relief.”

“Thanks. It was a long time ago now.” He gets up and grabs a bunch of towels. He lays two down over me and covers himself. “So let’s talk about Maddie.”

We talk for hours. I tell him about my friends and Connecticut and the lake club summer I was supposed to have. I talk about Gram and all the amazing things we’ve done over the years. I show him constellations, because there are millions of stars painting the sky above us. I tell him how I wish I could be close with my brother like we were before he got weird and angry.

He tells me how he half grew up in Italy and that now he’s in university in London, where his dad was born and raised. He loves soccer and surfing and has had a lot of girlfriends but none of them stuck. He brushes my hair out of my face and looks into my eyes and smiles as he talks. He tells stories about his crazy drunken friends, and I tell him they would get along swimmingly with my E’s.

“I have a million questions,” I say, sliding closer as the chill of early morning sets in.

But my questions can’t compete with Enzo’s hands pulling me toward him or his warm lips or his arms wrapping us together in beach towels. Never have I ever had the best kiss of my life with a ridiculously hot guy on a secret ship beneath a dense band of stars. There aren’t enough jelly beans for this one.

The screech of a deck chair wakes me up. We actually fell asleep making out. The pool maintenance guys are escorting Skinny Dave past the Grotto. He’s disoriented and having a hard time standing.

Enzo sits up and rubs his eyes. He looks at me and smiles.

“Welcome to the Wishwell,” he says. “It’s always an adventure.”

He walks with me to the elevator and kisses me good-​­bye when the doors open on my floor. “Bye, Girl in the Purple Dress,” he calls. The doors shut before I can answer.