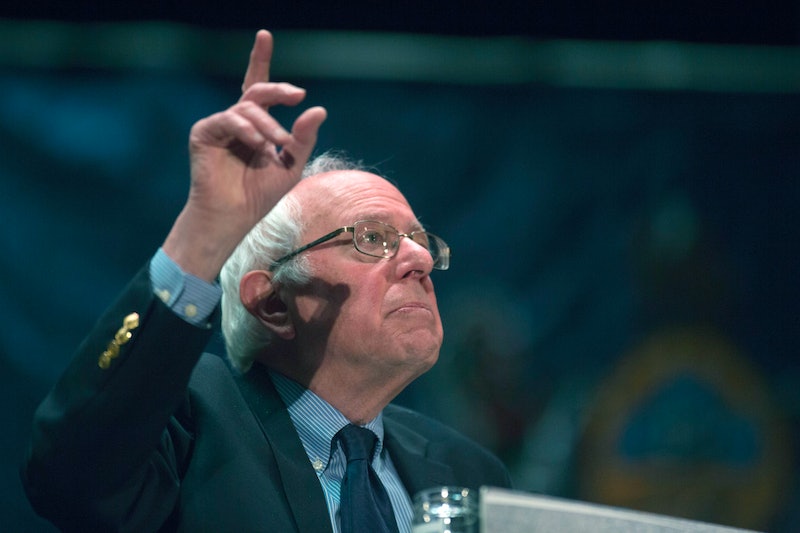 On April 26, Rhode Island will be one of five states holding their primaries in a sort of New England / Mid-Atlantic Super Tuesday. While Rhode Island is the smallest state in the country, it's receiving a disproportionately large amount of attention because of concerns over a dearth of polling sites. At the same time, the Ocean State has one one of the more complex voting laws about whether residents can choose the day of to vote in the Democratic or Republican primary. The question of whether Rhode Island's primary is open or closed doesn't actually have a simple answer.

Rhode Island has a hybrid system of sorts that's neither a strictly open nor a closed primary. According to the state's Board of Elections website, Rhode Island has a "semi-closed" party primary system. It means that if you're registered with a specific party, like the Democrats or the Republicans, then you can only vote in that party's primary. However, if you're "unaffiliated" (a political independent), then you can vote in the primary of your choosing.

The catch here is this: "Once you vote in a primary, however, you are considered a member of that party until and unless you 'disaffiliate.'" It's not too hard to "disaffiliate." You can fill out a form right after you vote (or any time after that) saying you want to go back to being unaffiliated, and your status will revert in 90 days.

This policy is good news for Bernie Sanders because it effectively means that independents can vote in the Rhode Island primary. It's no secret that Sanders tends to do well with independents, and that may be why the Vermont senator so vociferously denounced New York's closed primary rules (he lost the state to Hillary Clinton by 16 points). In fact, Rhode Island is the only one of the five primaries on April 26 that is not closed.

Only one-third of the state's 419 polling stations will actually be open on Tuesday, meaning Rhode Island voters face more obstacles to casting their ballots. While Sanders voters tend to be more persistent about casting their votes (some analysts argue that's why he does so well in caucuses), the lack of polling places could definitely hurt him. ThinkProgress reported that John Marion, the executive director of Common Cause Rhode Island (a nonpartisan government reform group), expressed concern over the shortage of Rhode Island polling sites and brought up the fact that "while Brown University usually has a polling place on campus, it will be moved off-campus for primary day on Tuesday." College students are a sweet spot for Sanders against Clinton, so the harder it is for them to vote, the harder it could be for him to win.

Still, Sanders could potentially beat frontrunner Clinton in Rhode Island. While a Brown University poll from February had Sanders trailing the former Secretary of State by nine points, it's clear he's made some major gains since then.

More like this
Gillian Anderson's New Netflix Drama Is *Nothing* Like 'Sex Education'
By Frances Stewart
Matt Hancock’s TikTok Is The Most Matt Hancock Thing Ever
By Sam Ramsden
Eurovision Has Been Given A Whole New Look Ahead Of Its Liverpool Debut
By Bustle UK
Here’s Where The NHS Nurses’ Strike Currently Stands
By Sophie McEvoy
Get Even More From Bustle — Sign Up For The Newsletter
From hair trends to relationship advice, our daily newsletter has everything you need to sound like a person who’s on TikTok, even if you aren’t.