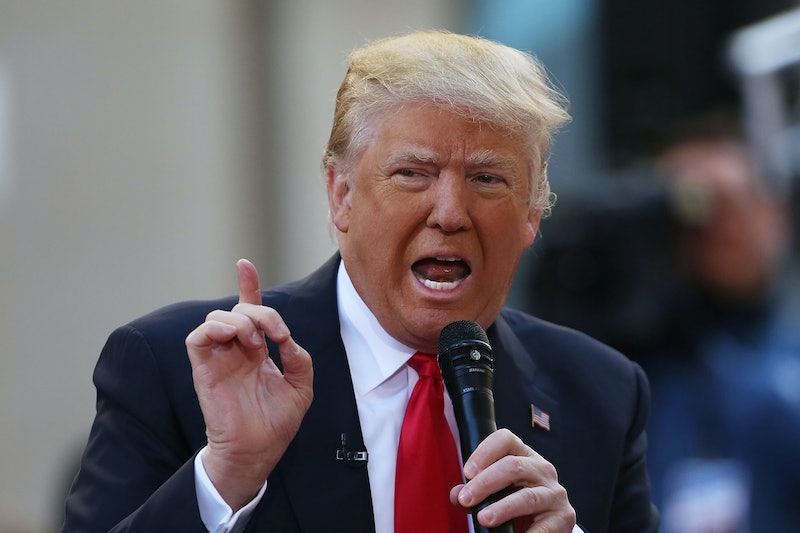 Although the anti-Trump movement seems as determined as ever to fight to the Republican National Convention this July, Donald Trump is coming closer to locking up the nomination. Whether the party's leaders like it or not, Trump is pretty much the only candidate who could get enough delegates to secure the Republican nomination ahead of the convention. However, he'll need some more wins from the five primaries this Tuesday. While Rhode Island doesn't offer the most delegates of the bunch, it still offers some (small) gains. But will Donald Trump win Rhode Island?

Rhode Island is a bit trickier to predict than some of the other states because the last major public poling of the Ocean State electorate was back in February. According to Real Clear Politics, a Brown University poll had Trump's closest Republican competitor trailing him by 18 points — and that competitor was Marco Rubio, who dropped out more than a month ago after his Florida defeat. Trump had 43 points, Rubio had 25, and his current closest rival, Ted Cruz, had a measly 10. Even if Cruz racked up all of Rubio's voters, he still wouldn't beat Trump, according to that poll.

Other analysts have turned to bordering Massachusetts as a possible predictor. If Rhode Island follows its lead, then Trump will claim the Ocean State. The Donald had a decisive (to put it mildly) victory in the Bay State last month, beating his closest competitor by more than 30 points. And again, the Republican who came closest — and I use "closest" very loosely — to threatening his victory was Rubio. Cruz finished fourth in Massachusetts, not quite earning 10 percent of the vote.

“It will be interesting to see how things change between the Massachusetts election and Rhode Island,” James Morone, Brown University's director of the A. Alfred Taubman Center for American Politics and Policy, told The Wall Street Journal. “I think that will be a very good gauge of how the candidates are rising and falling."

However, even if Trump wins the overall popular vote in Rhode Island, it's unclear how much that will pay off for him. Rhode Island doesn't offer a bevy of delegates (19), and they're allocated in such a way that winners don't get big gains. The state is divided into two congressional districts, with three delegates for each. The top three finishers in each district will split those three delegates evenly "unless one of the candidates finishes with more than two-thirds of the vote or one of the candidates finishes with less than 10 percent of the vote," FiveThirtyEight explained. The site predicted that "because of this quirk, it could be hard for Trump to meet our original target of 10 delegates even if he has about half the vote statewide." The other 13 delegates are divided up proportionally based on the statewide result.

Thus, while Trump may be headed towards a big win in Rhode Island, it probably won't pay off in a big way.