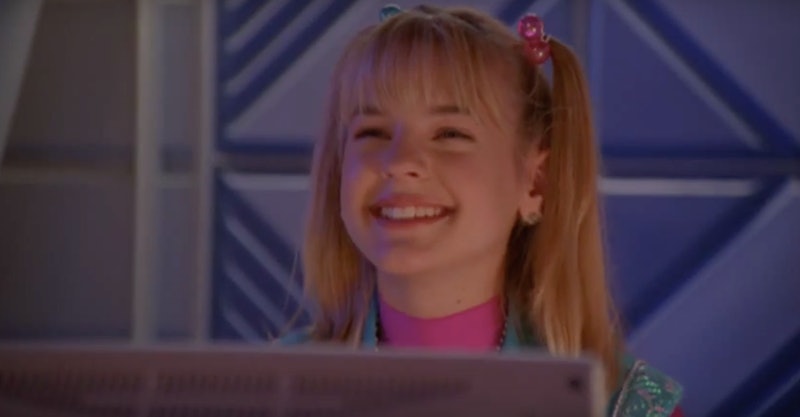 News broke earlier in April that the Disney gods, in all their infinite wisdom, would be airing a marathon of everyone's Disney Channel original movie favorites this Memorial Day weekend 2016. The marathon will be jam-packed with classics, including The Cheetah Girls, Cadet Kelly, Brink! and Zenon: Girl of the 21st Century. I firmly believe it's an understatement to say that many millennials lost. Their. Minds. What could be a better callback to our glory days than revisiting the Disney movies that made us all jump for joy? What did we do to deserve such a blessing?!

To me, the most exciting part of this marathon is that I get to reconnect with the television heroines who awoke my inner feminist. I don't say this lightly: The Disney Channel writers created some seriously cool and independent young women for their original movies. The female characters in Disney Channel films were the girls I aspired to be more like: Unapologetically intelligent, humorous, kind and valuing of their female friendships before catching the attention of their male peers. These were the girls that I watched with wide eyes, feeling reassured that my own bookish tendencies weren't weird, my big dreams of success weren't unattainable, and that valuing female friendships over pursuing my love interests was a good thing.

All this nostalgia-laden excitement has gotten me thinking: which Disney Channel movie will I be most excited to see? Which of these awesome heroines will have me dropping my other plans so I can sit down to watch? Well, like any sensible person, I can't choose just one. Instead, here are 12 heroines that can't be missed during this once-in-a-lifetime marathon event.

1. Zenon Kar From Zenon: Girl of the 21st Century

If there was one queen on the scene during the early 2000s, it was Zenon Kar. She not only made me excited about being a teenager in the literal future (spaceships and hologram teachers? Sign me up!), but she was also as independent as they came. Add to this a killer sense of style and you have to admit, Zenon oozed cool.

Kim Possible was a wunderkind: easy-going cheerleader by day and crime-fighting crusader by night. She moved effortlessly between the two worlds with her best friend, Ron, and Rufus the naked mole rat. Plus, she was a mix of pretty and tough in a way that wasn't weird and didn't objectify her. In So The Drama, Kim had to come to grips with not only saving the day but sorting through a maturing romantic relationship with Ron that felt so relatable as a teenager.

Kelly was so true to herself it was actual #goals, because she was free-spirited in a way that inspired viewers to embrace their true colors. Even when faced with the prospect of military school, Kelly was able to find the harmony between her hippie spirit and her rigid surroundings. It's her eternal optimism and creativity that made her such an inspirational spirit. Oh, and the fact that she had that amazing ribbon routine that I STILL want to replicate.

4. Galleria Garibaldi From The Cheetah Girls

Talk about sass! Galleria embodied sass in a way that made her shine. She was the leader of The Cheetah Girls and had big plans for the group. Even when her ego got a little too inflated after getting discovered by big-time producer, Jackal Johnson, she kept her team together. The bonds of friendship kept Galleria grounded and fulfilled — something that's crucial for every girl to grow up knowing.

Marnie was such an oddball, but in a sincerely endearing way. Her love and belief in magic is, in a way, aspirational. She was able to see the world in a different light, and she never let others change her beliefs. Marnie believed in her own literal and metaphorical power so much so that she was able to help save Halloweentown. Her roving imagination and childlike sense of wonder made me embrace my own.

Ren Stevens was the brainy, put-upon older sister that I felt so close to growing up. She was the best kind of type-a overachiever. She was confident in her intellect, never feeling like she had to compromise in order to be at the top of her game. Even though she was constantly battling her brother Louis and she sometimes ended up with egg on her face, Ren was a nerd we could all love.

The embodiment of a tomboy, Gabriella didn't settle for nonsense. The only girl on her skate team, gender was not a factor in whether she made a name for herself. She was skilled, giving the boys of Brink! a run for their money. She pushed her friends like she pushed herself, all in pursuit of greatness. Gabriella didn't confine herself to the typical ideas of how a young woman should act and that's what made her so memorable.

Mitchie is maybe the best of the Disney Channel musical stars because she embodied the beautiful awkwardness that comes with growing up. Her journey in Camp Rock followed the trope of "finding your voice," and Mitchie did it like a master. Her focus on music and not on the gorgeous Shane Gray (swoon-worthy though he may be) was noteworthy too. But, what's even more admirable is the she was willing to put in the work in order to make her mark at camp.

Oh, Gabriella. OK, so I know that Gabriella is arguably just a modern day Sandy from Grease, but that's what makes her so great: she's a good girl who would rather indulge in after-school activities. There was something particularly delightful about watching her build her confidence onstage that felt so relevant during my own high school years. We can all relate to feeling like a fish out of water; Gabriella taught us that we shouldn't let others stop us from pursuing our passions.

The Proud family is, hands down, one of the best Disney Channel families to ever exist. They are weird, loud, goofy and supportive of each other to the very end. Penny is one of my fave of the group. She's chill and independent in the best way possible. She wasn't afraid to speak up about what she wanted: the freedom to mature on her own terms. That's a feeling I can get behind.

Hearkening back to Shakepeare's Twelfth Night, Andrea is a modern-day Olivia. When she found her journey to motorcross success was limited as a woman, she transformed herself into the more masculine "Andi" in order to have her shot at proving the naysayers wrong. She was not swayed by those who told her she couldn't achieve suggess — instead, she pushed through the gender-biased obstacles that were in her way. Andrea was the feminist go-getter we needed growing up.

The Callum sisters were a mess but they were our beloved mess. Watching the girls eat a hearty helping of humble pie while learning the meaning of hard work was a nice change of pace. The girls went from materialistic to community-minded, a low-key charming reminder to all our developing psyches that caring about the well-being of other is an important value to have. The girls had each other's backs through thick and thin, echoing the running theme in Disney Channel films of this era that you shouldn't throw the women you love under the bus.

Even talking about all of these Disney Channel babes has my heart a-flutter. It's going to be absolute torture having to wait until Memorial Day weekend just to reconnect with them all and the only cure will be to start re-memorizing the lyrics to "Supernova Girl" in. Which films are you most excited to see?