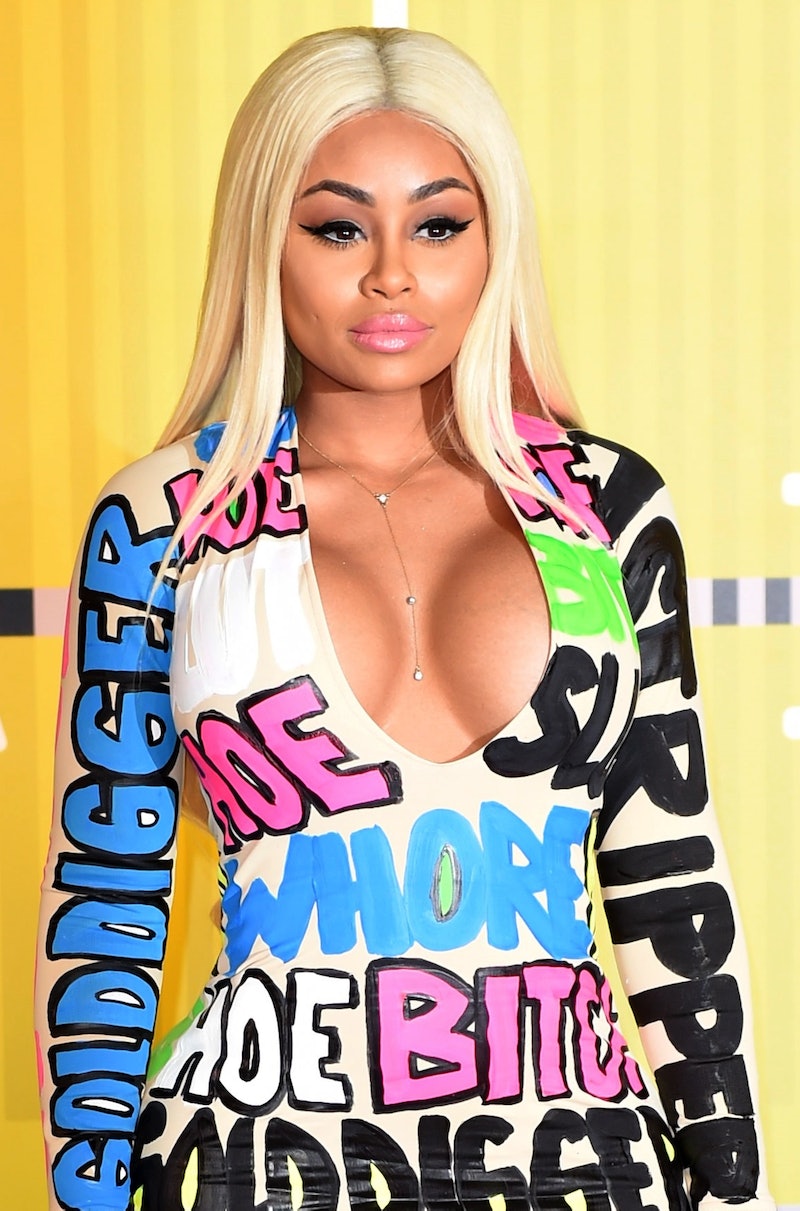 It was a big deal when the Internet realized that Blac Chyna will legally be "Angela Kardashian," since she plans to take Rob Kardashian's last name when they get married, as her rep told Us Weekly. For some reason, it already sounded so on-brand with the Kardashian-Jenners to begin with ("Angela Kardashian" has that Kardashian ring to it, right?), and it also may have been the first time that people became aware that Blac Chyna's real name is actually Angela — Angela Renée White, to be exact. Which, of course, makes the world insatiably curious to find out the meaning behind her nickname. Let's dive right into it: Why is Blac Chyna called, well, "Blac Chyna"?

According to YouTube video series Before They Were Famous, Chyna dubbed herself "Blac Chyna" after she met a client with the moniker at a strip club where she used to work and asked if she could borrow it. The video also notes that Chyna previously went by "Cream" and "Dora Renée." And according to her Wikipedia page (which seems to be literally the only source for this tidbit of information), the man Chyna met at the club called himself Black China "because he was a black guy with Chinese looking eyes." Not sure how politically correct that is, but it's the story nonetheless. Bustle has reached out to Chyna for comment on these claims, but has not yet received a response.

While most of the world knows her as "Blac Chyna," Kardashian already revealed that he has several other nicknames for his soon-to-be wife. One, of course, was when threw the entertainment world into a tizzy by 'gramming a photo of his fiancée and referring to her as his "beautiful wife." E! News, ever to the rescue, quickly debunked rumors that the two had secretly tied the knot, with an insider explaining that "wife" wasn't so much a legal term in this case, but an affectionate one. "Apparently he calls her wifey playfully, and she calls him hubby," the source said.

Kardashian revealed another sweet nickname for his lady love by sharing a photo of the two of them and calling Chyna "[his] motivation" for losing weight and getting healthier. "Looking from where I started 298lbs to my current weight now 248.4lbs, I'm focused and determined to reach my goal weight 200-205lbs," he captioned the photo of the two smiling. "Happy I found my motivation."

As for what Kardashian calls his fiancée when they're alone, based on the fact that Chyna plans to legally be "Angela Kardashian" and the Instagram above, I can only assume he primarily refers to her as Angela. (Although since the rest of the fam refers to Kylie Jenner's boyfriend, Tyga, as "T" — not his given name, Michael — maybe Kardashian calls her "BC" sometimes.) Whatever nicknames Kardashian may have for his future wife — and whatever moniker she has given herself — one thing's for sure: At the end of the day, she's just Angela White-soon-to-be-Kardashian, no nickname necessary.