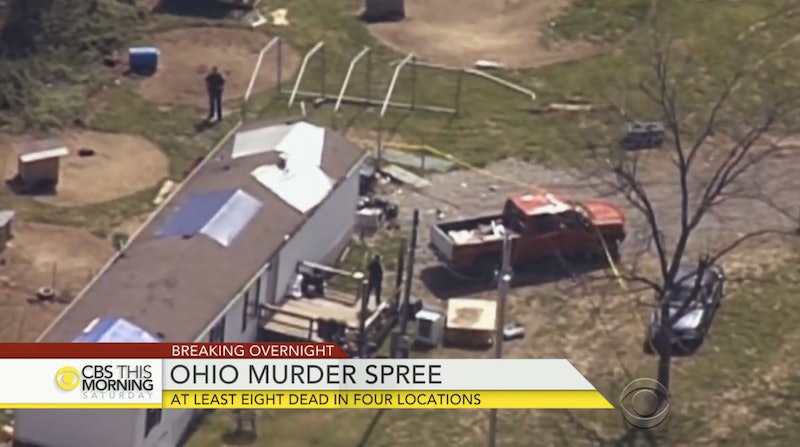 At least one person is being questioned Saturday for the mass shooting in rural Ohio that left eight people dead, including a 16-year-old boy. According to WHIO, authorities have detained a person in connection with the Ohio murders, but investigators would not use the term "person of interest," countering other media reports. The murders occurred in Peebles, Ohio, a rural area southeast of Cincinnati.

At a news conference Friday night, Ohio Attorney General Mike DeWine and Pike County Sheriff Charles Reader said more than 30 people have been interviewed in connection with the slayings. The officials clarified that the person of interest reported by the media was one of those dozens of people questioned by authorities.

As of Saturday, the gunman or gunmen were still at large, and a manhunt is ongoing. Officials reiterated that they're still unsure how many suspects they're looking for, and that residents should keep their doors locked because there is a threat of violence. "There is a threat there," Reader told reporters Friday night. "They could be armed and dangerous."

The bodies of the eight victims were discovered Friday in four different homes on Union Hill Road in Peebles, the attorney general's office said in a statement. The victims were all members of the same family, and authorities believe they may have been targeted. From the gunshot wounds, authorities said the victims appeared to be shot "execution style."

There were three survivors: two children and a four-day-old infant. DeWine told reporters that the baby was in the arms of its mother, who was one of the eight victims. She was found lying in bed.

Ohio Gov. John Kasich, who's still in the race for the Republican presidential nomination and is currently stumping in Connecticut, tweeted on Friday that the murders in Peebles are "tragic beyond comprehension." Kasich said he will continue to work with local law enforcement despite being on the campaign trail.

Although no arrests have been made, the attorney general's office said in a statement Friday that this is not an active shooter situation. "The investigation is in its very early stages, and authorities are still investigating to determine a motive, identify the deceased, and determine if the gunman is among the deceased individuals or on the loose," the attorney general's office stated.

"This really is a question of public safety, and particularly for any of the Rhoden family," DeWine said Friday night.