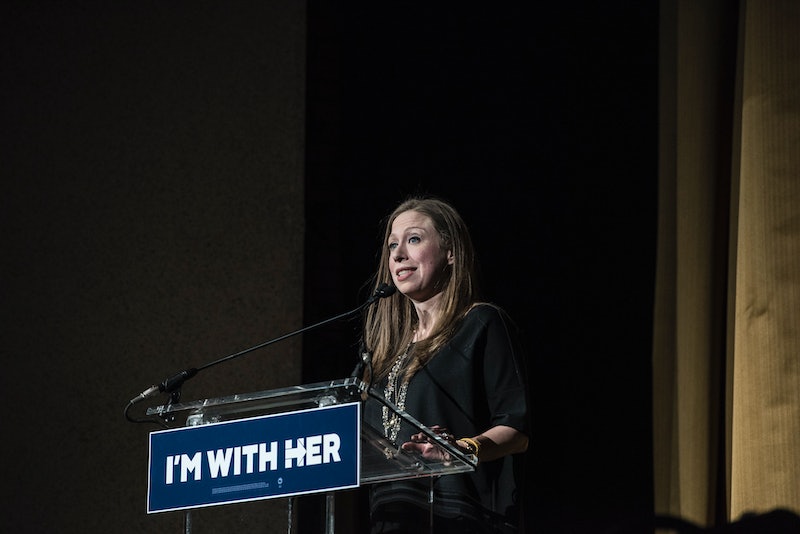 As if Hillary Clinton isn't going to be busy enough in the coming months, she's also about to become a grandma twice over. In December, Chelsea Clinton announced that she was pregnant with her second child, which immediately set everyone ticking off months on their fingers. Will Chelsea Clinton's baby be born before the election? Hillary Clinton's second grandkid might get a little bit of grandma's attention before she heads full throttle into the general.

Chelsea, who went from slight baby bump to OMG pregnant seemingly overnight, said in December that she was due sometime in the summer. The details of the exact due date have been kept under wraps, but even if you, er, push her baby due date to the end of summer in September, that still means that Chelsea and her husband, Marc Mezvinsky, will be welcoming the baby at least two months before the election in November. And judging by the size of the aforementioned baby bump, I would put the due date around May or June.

That means that Clinton-Mezvinsky #4 could come before Grandma Clinton has even clenched the Democratic nomination. The Democratic National Convention is July 25, which will determine if Bernie Sanders or Clinton will represent the Democrats in the general.

So Hillary Clinton will definitely have another grandchild by the time the general election rolls around, if not before she is the nominee (and her Democratic clench is all presumptive, of course). This also starts the countdown to sexist remarks on if Clinton can, at once, be a grandmother and the leader of the free world. There was a similar backlash when Clinton's first grandchild, Charlotte, was born, even before Clinton had announced that she would, indeed, run for president in 2016.

In April 2014, The Washington Post ran an article that speculated on whether Charlotte's birth would affect her decision to run: "It is not crazy to wonder whether Hillary Clinton ... might pause and think: Do I want to suffer through another campaign and then bear the burdens of the world at this point in my life? Or do I want to enjoy this new little life and work through the family foundation on my own schedule?"

That, of course, was absurd. Unsurprisingly, there was no similar head scratching about Donald Trump, whose daughter Ivanka gave birth in March. Imagine how that could affect his presidency? Being a grandpa and president?! Hooray for double standards!