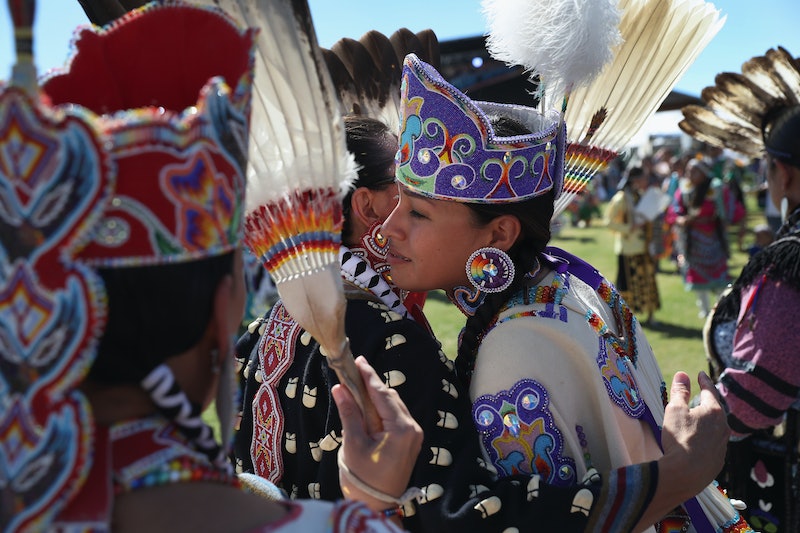 This Valentine's Day, as most of us worry about overdosing on chocolate or what the perfect gift would be for a casual hook-up, the indigenous women of Canada and the U.S. have more important matters in mind. Indigenous women in both countries experience a truly disturbing amount of violence, with high rates of sexual assault and stalking, often perpetrated by non-native intimate partners. And yet when indigenous women go missing, their disappearances often receive little to no media coverage. That's why today these women are marching to honor their missing and murdered mothers, sisters, and friends.

Indigenous activists organize marches to raise awareness every year on Valentine's Day in several cities and communities across North America, a tradition that began in 1991 after the murder of a Coast Salish woman in Vancouver. Many efforts have been made in recent years to ensure greater protection for indigenous women — just yesterday, the Native Women's Association of Canada presented the Canadian Parliament with a petition bearing 23,000 signatures urging the government to hold a national public inquiry on the issue. Here in the United States, the Violence Against Women Act recently gave tribes the power to prosecute non-tribal members for crimes of domestic violence on tribal land, providing indigenous women some long overdue protection. However, the problem is not going to go away any time soon.

Drawing attention to this ongoing issue is important. Save Wiaybi, an advocacy group created by and for indigenous women, has been working on a map that tracks incidents, and has so far compiled over 900, most of them heavily concentrated near the United States, Canadian border. According to the group that organizes the Vancouver marches, 3,000 indigenous women have gone missing in Canada alone since 1970. And yet the issue receives very little attention.

The co-founder of Save Wiyabi, Lauren Chief Elk, writes in a truly amazing Slate article today, "The media routinely fail to inform the public accurately about the cases of missing indigenous women. As my partner Laura M. Madison states, 'Indigenous women go missing twice: Once in real life and a second time in the news.'” It is this erasure of indigenous women that the annual February 14th marches seek to combat, while also honoring the victims of violence.

So this Valentine's Day it is good to remember that for all too many women, especially indigenous women, love can lead to tragic outcomes, made even more tragic by a lack of acknowledgement by the wider world.