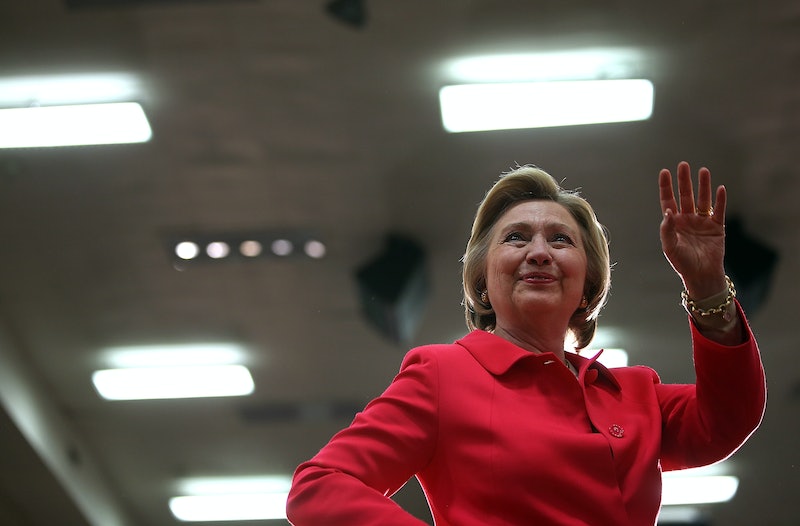 Former Secretary of State Hillary Clinton currently holds the lead in the Democratic presidential primary race, leading Sen. Bernie Sanders of Vermont by more than 700 overall delegates. However, the greater disparity between Clinton and Sanders is among the superdelegates. Clinton has secured 502, and Sanders, meanwhile, has just 38 superdelegates. What happens to Clinton's superdelegates if Sanders beats her at the end of this frenzied primary race? It's a little complicated.

To claim the Democratic presidential nomination, a candidate needs at least 2,383 total delegates. At this point in the race, there are still 1,644 delegates available for either Clinton or Sanders to claim between now and June 7, when the final primaries take place.

Although Sanders lost his birth state of New York last Tuesday to Clinton, the progressive senator has refused to suspend his campaign. Sanders staffers have told the media this week that the campaign will likely continue until June 7, the date of the California, New Jersey and New Mexico primaries. And maybe there's no reason for Sanders to throw in the towel before the season's over: Sanders is only trailing Clinton by a few hundred delegates when tallying just the pledged delegates, and not the superdelegates. Currently, Clinton has 1,428 pledged delegates to Sanders' 1,151 pledged delegates.

Is it possible for Sanders to reach that magical 2,383 number? Yes. But what would happen to the superdelegates?

Depending on how these last remaining state primaries and caucuses turn out, the 2016 Democratic presidential nomination may come down to these superdelegates. Progressives aren't too excited about this possibility, with MoveOn.org's Washington director Ben Wikler telling The Huffington Post this week: "Superdelegates shouldn't overrule the will of the Democratic grassroots," Wikler added. "If the primary and caucus winner is Hillary Clinton, then Clinton should be the nominee. If it's Bernie Sanders, then Sanders should be the nominee."

Yet it's entirely possible that Clinton could win her party's nomination despite losing the so-called grassroots votes. That's if she can hold onto her superdelegates.