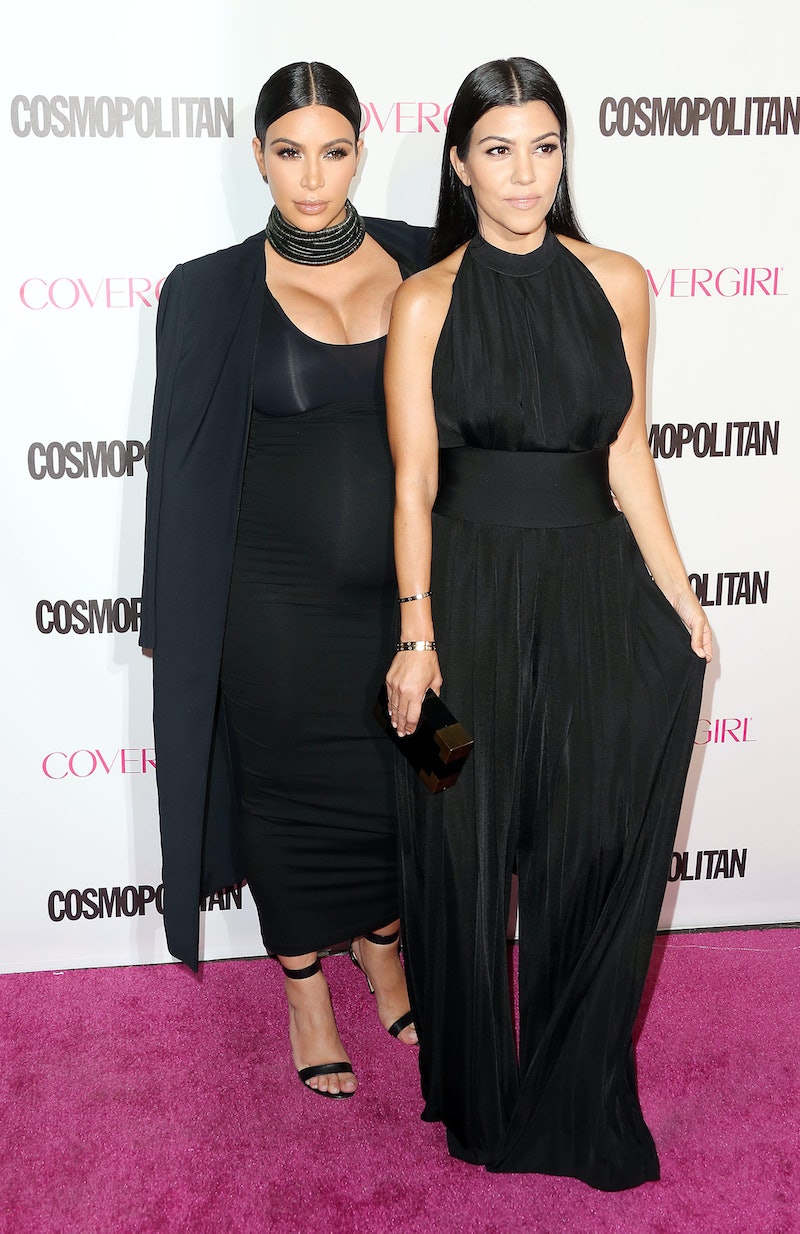 If you have a sister, you might recall having a couple of twinning moments with her when you were little. On Apr. 23, Kim and Kourtney Kardashian in Miami showed us that being matchy-matchy is not something we need to grow out of. Back in the day, you and sis might have sported matching floral dresses, Mary Jane shoes, and pigtails, and the Kardashians channeled the same vibe: Just much sexier.

In Style reported, "Kim and Kourtney both stepped out in skintight dresses to attend their friends' pre-wedding festivities in Miami with Kanye West and pal Jonathan Cheban." Kim opted for a skintight nude maxi dress with a turtleneck neckline, while Kourtney chose an olive mini with shoulder cut-outs and a crewneck neckline. But the hot, seemingly painted-on fit and jersey material weren't the only sartorial similarities they rocked that evening.

In Style observed, "Both ladies opted for pulled-back hairstyles (although Kourtney's was noticeably more voluminous) and ankle-strap nude pumps to finish off their looks." Although they don't look like mirror images of one another, the looks definitely have a #twinning vibe to them. A part of me wants to imagine the duo getting ready in the same room — one keeping an eye on the other and copying her wardrobe choices.

The twin moment is extra sweet because it's reminiscent of the two sisters' time in Miami together for their spinoff reality show. As E! News noted, "The Keeping Up With The Kardashians [stars], who starred in the spinoff Kourtney And Kim Take Miami , were joined by Kim's husband Kanye West, 38, their daughter North West, 2, Kourtney's daughter Penelope Disick, 3, and several friends, including Larsa Pippin."

Apparently the night wasn't only for wedding celebrations, though. According to E! News, things turned into an impromptu birthday surprise for Kourtney. "The celebration later turned into a belated birthday party for Kourtney, who turned 37 earlier this week. A five-tier cake with white icing, white flowers, and silver trimming [...] was presented to her." If she had all her friends in one place, why not?

One thing's for sure: The Kardashian clan works sartorial wonders whenever it hits Miami. Extra props for reminding the rest of us that sisterly matching never goes out of style.