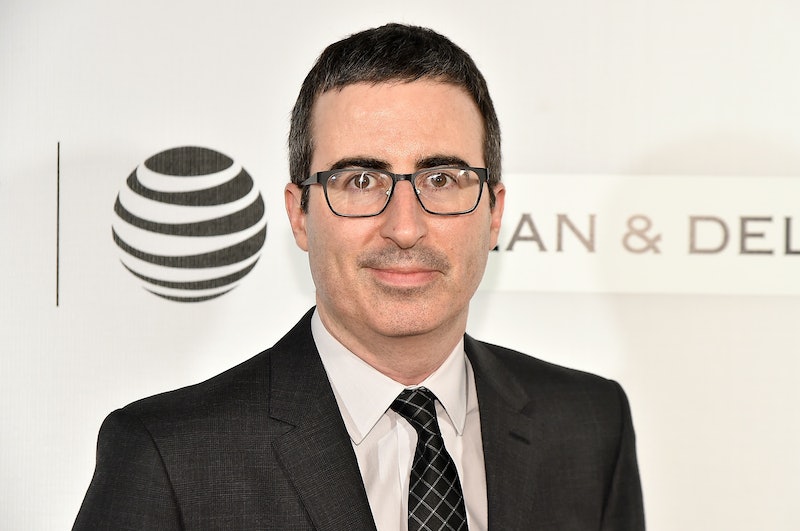 If there's an idiotic leader, a corrupt organization or a viral animal video anywhere in the world, chances are John Oliver has used it as material for his late-night satirical show, Last Week Tonight. He's successful at least in part because he can take a story that people care very little about and turn it into something you email to all of your coworkers on Monday morning. But there's something particularly funny about the times that he uses a story you do care about — and that's what makes Oliver's jokes about American traditions so memorable.

In fact, you could make the argument that nearly every one of Oliver's episodes pokes fun at American traditions. After all, he talks about presidential campaigns, televangelists, and standardized tests, which — love them or hate them — are all pretty commonplace elements within American culture. Even Oliver himself and the type of show he represents have become parts of American culture. Every now and then, though, Oliver will take on some of the more beloved, almost-sacred elements of the American way of life, pointing out the ironies that exist within our traditions. It's a weekly reminder that it's O.K. to laugh about ourselves, as long as it means we're thinking about the bigger picture.

Too soon? In March, Oliver couldn't resist analyzing the unbelievable amount of money that American companies invest in the annual college basketball tournament. Takeaway: Did you know that there's an official ladder of college basketball?

April Fool's Day is to Oliver what a dentist appointment is to the majority of us: a pain in the you-know-what. If you agree, take his No-Prank Pledge. Takeaway: April Fool's Day was not created by FDR during the Great Depression.

Perhaps the most important American tradition of all, voting does not come without its ironies. As Oliver pointed out, voting is the cornerstone of American democracy, yet many states have made voting more difficult for residents in recent years. Takeaway: The jokes aren't as funny when you realize there could actually be a serious flaw in your country's political process.

New Year's Eve celebrations take place around the world, but as Oliver points out, NYE is one of the few major holidays that unites all Americans, regardless of religion, background, etc. It's also a great time to test out some new excuses for avoiding social settings. Takeaway: "You're doing a cleanse?" Best excuse ever.

If your most recent Fourth of July celebration included fireworks, Oliver knows exactly how it went down. For the record, he prefers to call it "the day of colonial aggression." Takeaway: It doesn't take an American to appreciate an Independence Day fireworks display.

Back in 2014, Oliver wondered how beauty pageants were still a thing. Sadly, he's probably still wondering that today. Takeaway: Can someone please start a women's scholarship that doesn't involve bikinis?

It's only natural to get excited about potentially winning millions of dollars. That still doesn't make it logical. Takeaway: Don't do it for the schools.

Week after week, Oliver makes Americans laugh at themselves. And then cringe because he usually has a point. Takeaway: Enjoy your traditions, but don't be surprised when they become a witty punchline.

More like this
Juneteenth Is Now A Federal Holiday — Here's What That Means
By Lani Seelinger and Syeda Khaula Saad
Police Shove 'Full House' Star Jodie Sweetin At An Abortion Rights Protest
By Radhika Menon
How To Fight For Reproductive Rights, Based On How Much Time You Have
By Courtney Young
How 5 People Upended Their Lives To Fight For Abortion Rights
By Hannah Smothers
Get Even More From Bustle — Sign Up For The Newsletter