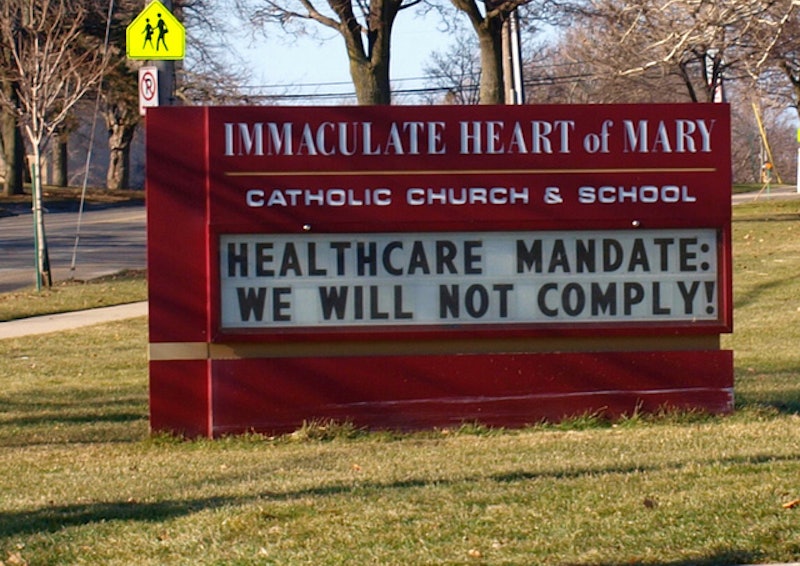 The (mostly female) Catholic Health Association has agreed to accept a compromise over birth control coverage in the Affordable Care Act, but, once again, they find themselves at odds with (mostly male) church hierarchy.

The question of who should pay for contraceptives is of course one of the most divisive points in ACA implementation, and well, in general. The Obama Administration's infamous law requires employer-based health insurance plans to cover the costs of birth control for women; a move widely praised by women's groups. Originally, the law exempted churches and other religious groups from that requirement, but not hospitals, non-profits, universities, or agencies with a religious affiliation. This narrow definition did not sit well with religious institutions, as the Catholic Church and its friends made clear through a robust campaign against the Department of Health and Human Services.

On June 28, the Obama administration proposed a compromise: Women who work for religious hospitals and comparable non-profits can still get their birth control covered, but only by a private insurance company or insurance administrator, not their reluctant employer. For the women and men of the Catholic Health Association, this compromise worked. In a statement, President and CEO Sister Mary Keehan said: "We are pleased that our members now have an accommodation that will not require them to contract, provide, pay or refer for contraceptive coverage."

But for the Catholic Church writ large, the plan is still a no-go. A group of U.S. Bishops is suing to overturn the entire requirement, arguing that it violates their freedom of religion.

This isn't the first time Church hierarchy has found itself publicly siding against an American Catholic group gone renegade: Earlier this year, Pope Francis upheld a reprimand against the Leadership Conference of Women Religious, which represents 80 percent of nuns in the United States. The Vatican's doctrinal assessment last year concluded that their organization had become "tinged with feminist influences, focused too much on ending social and economic injustice and not enough on stopping abortion, and permitted speakers at its meetings who questioned church doctrine."

NPR's Julie Rovner reminds us that both the Catholic Health Association and the bishops have learned from their last fight in 2010, when bishops warned that the new health care law would provide federal funding for abortions, and Sister Keehan said it wouldn't. This time, the Catholic Health Association told the Vatican that they would be coming out in favor of the birth control compromise before it hit the news.

One point all parties seem to agree upon: There probably won't be a resolution on this until a lawsuit reaches the Supreme Court. See you next year, Scalia.