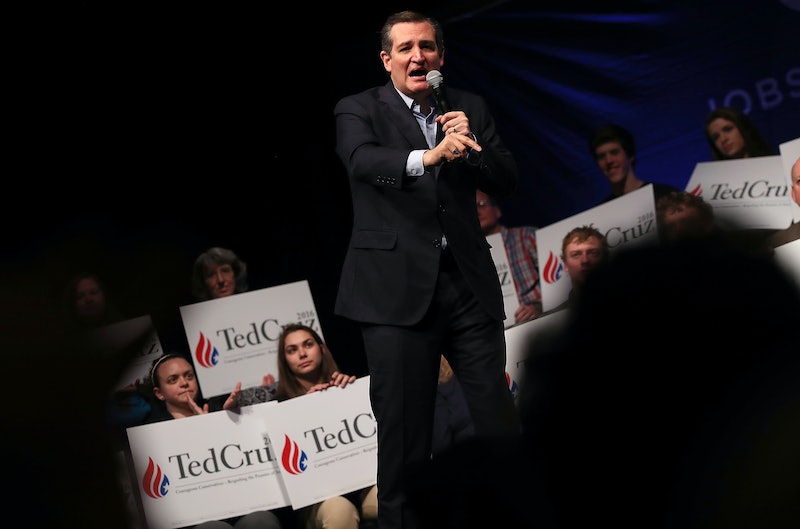 Everybody Hates Ted could be the name of a television show at this point in the Republican presidential race — the Texas senator has come under near constant fire throughout his candidacy for his renowned unlikability. From his colleagues in the Senate, to former president George W. Bush, to the gruesome Lindsey Graham, it seems like the whole world is against Ted Cruz. But now, one friend is coming forward to support Cruz in his time of crisis, as the Republican nomination looks less and less likely. David Panton, one of his former college roommates, is speaking out against all the Cruz haters and trying to help him win the election.

Panton was born to a wealthy family on Jamaica with ties to the country's political establishment. According to an interview Panton conducted with The New York Times, Panton hoped to one day become the prime minister of Jamaica during his days as a student at Princeton University, where he first met Cruz. The two became friends as they bonded over conservative politics and senior thesis ideas, and later became debate partners who went on to win the North American Championship in 1992. When Cruz was elected the chair of the American Whig-Cliosophic Society, Princeton's elite political club founded by James Madison and Aaron Burr, Panton served as his whip. Later, Panton also attended Harvard Law School with Cruz, and became president of the Harvard Law Review, the second black person to lead — after current President Barack Obama.

The two were on track to help one another become political giants, but Panton's star seemingly fell somewhat short in the wake of scandals that covered Jamaican tabloids when he moved back to the island after college. Panton married and had a son with Lisa Hanna, a former Miss Jamaica and Miss World, but the marriage ended in divorce and an international custody battle, as Panton and his family had moved to Atlanta just before the divorce. Then in 2006, Wendy Fitzwilliam, a former Miss Universe from Trinidad, shocked the Jamaican media once again when she revealed that she had a child with Panton and published a book about their relationship. Now, Panton owns an investment firm and serves as the chairman of the Jamaican Chamber of Commerce of Atlanta.

The New York Times published an article about Panton's support of Cruz and their friendship in college, and it paints a totally different light than what his first college roommate, Craig Mazin, has said about Cruz. "The media has caricatured Ted as this one-dimensional, hard-core guy," he told The Times. "Ted is principled, but he is actually a good guy and was a great friend to me."

It's a true sign of the times that Cruz's roommates have even come to be relevant in this election at all. The chaos of this election season has brought even the most outrageous information to light — Donald Trump's gross mention of his... size, Hillary Clinton's hot sauce, and of course, the undying hatred of Cruz's other former college roommate, Mazin.

Presidential elections always bring out some unexpected facts and revelations about the candidates, and no matter what you feel personally about Cruz, it is somehow comforting to know that he has a friend, somewhere in the world.