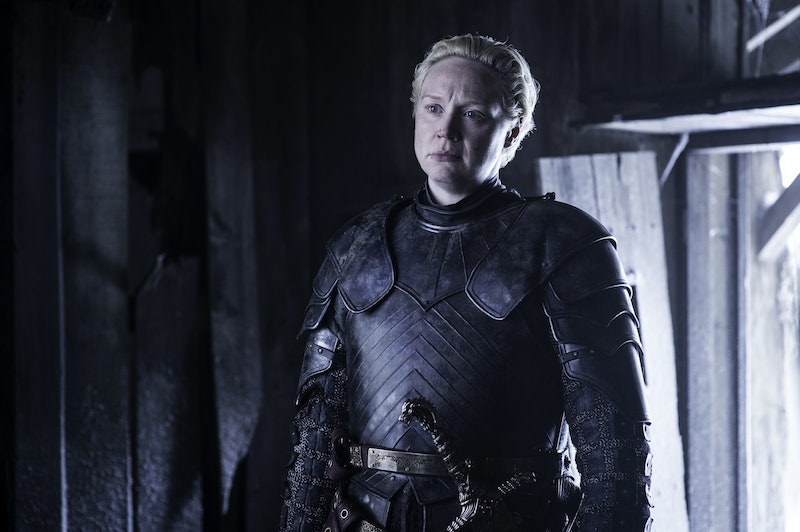 You know what — Sansa Stark is a class act. Why did Brienne save Sansa on Game of Thrones ? Not only did the Lady of Tarth come to Sansa and Theon's rescue from the Bolton hunting party, but she pledged her service once again and this time, Lady Bolton (but really, Lady Stark) accepted.

In previous seasons, Brienne of Tarth pledged herself to two different people: Renly Baratheon and Catelyn Stark. By killing Stannis, she fulfilled her vow and avenged Renly. By protecting Sansa, she is upholding her loyalty to Sansa's mother. Remember when Brienne met both Littlefinger and Sansa at the inn? She tried to pledge her allegiance to the Stark girl then, but was denied. Brienne later (indirectly) told Sansa to light a candle in a tower if she ever wanted help — which, of course, she was never able to do under Ramsay's watchful eye.

So it's awesome that Brienne was able to catch up to Sansa. Both of them could really use a few more wins in life. It's them against the North, now, and I'm pretty sure they can do some damage. It's also super sweet, because Brienne's sword that she laid down in front of Sansa was forged from Ned Stark's blade. I couldn't think of a more fitting use for it. Also, can I start 'shipping Sansa with Pod, already? After Joffrey and Ramsay, she could really use a nice boy, and Pod is basically the best.