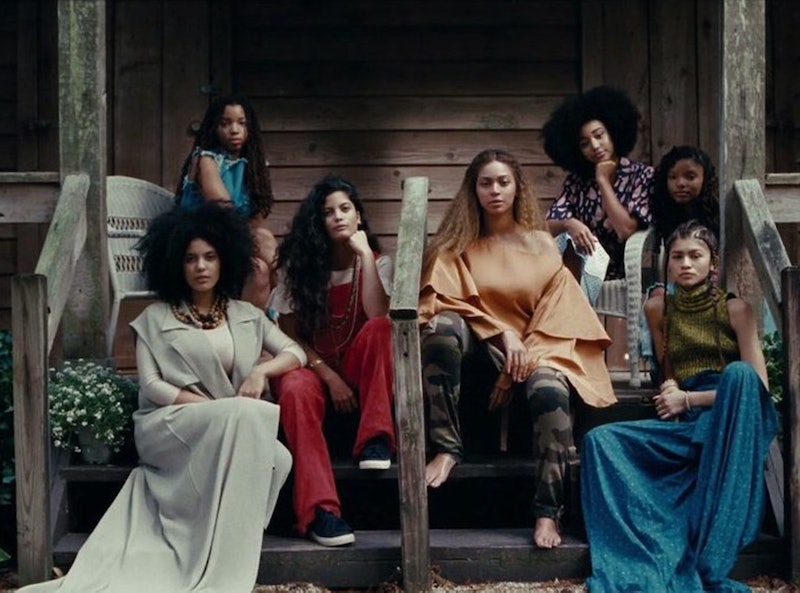 If there was an award for fearless female that continues to push the hair envelope, it would go to Beyonce. As if we needed further proof, Beyonce's Lemonade featured many hairstyles that completely celebrated all types of afro-textured 'dos — something not frequently seen in mainstream entertainment media. While we typically think of pushing boundaries in afro-textured hair as only the biggest, most natural 'dos, the styles in Bey's latest masterpiece also celebrated relaxed hair, natural hair, and weaves, proving there's no one way to have black hair.

Looking at old photos of Beyonce is one way to find yourself coveting plenty of styles, but you can save yourself a Google search just by watching Lemonade. Within the first five minutes, afro-textured curls fill the screen, then Bey arrives simplistically in a Badu-style headwrap, followed by her familiar wavy curls floating past. And the most powerful thing about seeing these amazing styles fly across my screen is that, at one point in history or another, the majority of these 'dos were banned — if not by law, then by social stigma that prevented black individuals who wore their hair natural from thriving. Not only do the styles take us back through all of Beyonce's best looks, they also remind us of how far afro-textured hair has come... and how far it still has to go before videos like these aren't out of the ordinary. Here are 14 'dos from the visual album worth celebrating.

Cornrows are one of the best protective styles for those who don't have the time to manage their fragile hair. These same cornrows were deemed "ghetto" or "unprofessional" until they recently started popping up on the heads of white celebrities. Women of color still face the stigma of cornrows, but Bey's gold rows prove that this protective style is anything but unprofessional.

One of the first styles we see in Lemonade is Bey donning a Badu-like headwrap with the knot in the front framing her gorgeous face. Centuries ago, black American women were banned from wearing their hair out in public. So, many wore their hair in colorful Tignons or wraps to cover up their natural curls. Today, however, many view these wraps as "hats," which means it's not uncommon for one to have to remove a wrap for a job, school event, or while getting a new photo for your license taken. Yet our curls still have restrictions in corporations, schools, and the military.

Just like the beginning of black hair in America, the beginning of Lemonade shows off all the big, beautiful, and different hair textures of black American women. This moment reminds me that our hair is more than just what keeps our head warm or something to fuss over in the morning: It's the hair of our ancestors.

4. The Little Boy With the Flat Top

Flattops are not just for the '90s, as Lemonade reminds us. Will Smith, Martin, and Keenen Ivory Wayans all graced us flat tops and I would be lying if I said I didn't swoon whenever I catch a glimpse of one. Despite my own love for the hairstyle, it wasn't too long ago that children were being sent home from school for wearing a flattop, which makes this image even more powerful.

5. The Little Boy With Hair We All Dream Of

Of course this child and his beautiful locks have made the cut on the most fearless hairstyles in Lemonade. Guys, let that hair grow: Girls shouldn't be the only ones allowed to celebrate big hair.

For anyone who's been debating wearing this protective style out in public, I implore you to let this drummer's twist out show you that you should never question it. This style doesn't have to be perfectly parted or done by a professional either. Rock your twists confidently, because healthy hair is beautiful.

7. The Photos Of Women With Their Various Hair Styles

As the recording proclaims "The most neglected person in America is the black woman," snippets of women in wigs, braids, and natural hair are showcased. This is one of the most remarkable moments for black hair in the video. Not all black hair is the same, and it doesn't have to be. Whether you rock your natural texture or love relaxers and weaves, we can all agree on one thing: The stigma of having black hair is a struggle that has only recently gained public attention.

No stranger to platinum blonde hair, Bey puts her tresses in a familiar style by candlelight and totally rocks that lighter 'do. Blacks wearing their hair blonde has long been a source of contention, but Bey laughs in the face of haters once again by confidently showing us that you can still have fun as a black blonde. Part of having autonomy over your hair texture means being able to wear it however TF you want.

Most of us are not going to be able to pull off tribal face paint on our daily bus rides, these hairstyles are envelope pushers that aren't for the faint of heart. Wild as the paint on the face, my girl with the knots has me in all sorts of hair envy.

If you ever thought you wanted to look like African royalty or Iman (let's face it, kind of the same thing) then this 'do is going to give you a surge of "good hair" and confidence. Yes, child, another reason why you shouldn't hate on the weave is because they can create powerful updos like this one.

My only hope for the future is that one day there is an occasion for me to wear an elaborate headpiece like Beyonce has done above. It may not be the modest accessory I'm used to, but the weight has to be worth the amount of compliments I'll get wearing it.

Not only do I love the country-feel of this track, but Bey's coif is something I've often tried to recreate. This is one of the most easy hairstyles for medium-long hair; whether you're relaxed or natural, you can scoop your hair up into elegance... and maybe sing the blues while you're at it.

This is a hairstyle I was all too familiar with growing up. A quick brushing of my kinky locks and a few elastics on each side to give me two perfectly, poofy braids. I've often wondered if these braids were just for children, but fortunately, Bey has given me a reason to play with the styles of my youth.

Straightening afro-textured hair has been used for centuries. Whether it's from an iron, a hot comb, a blow-dryer, a flat-iron, or a chemical relaxer, straight hair will unlikely ever be just a thing of the past. For many women, straight hair allows for freedom, manageable hair, and opportunity.

From afros to braids to relaxed strands, the hair in Beyonce's visual album makes a statement of autonomy and black individuality that we simply can't afford to ignore. Plus, it all just looks straight up fierce.