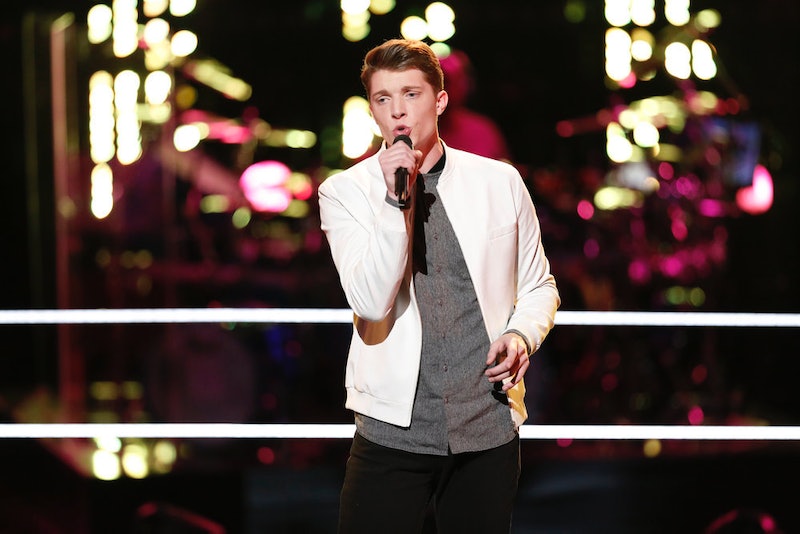 The Voice Season 10 live playoffs are here and the competition is fierce. The Top 11 singers are an impressive crop of talent, but who will take home the winning trophy? It's a tough call, but Daniel Passino's best performances on The Voice have given him a solid case for making it past this week and beyond. The 21-year-old singer on Pharrell Williams' team impressed coaches with his Blind Audition to the tune of Charlie Puth and Megan Trainor's sexy song "Marvin Gaye." But the road to The Voice playoffs wasn't exactly smooth for the young singer.

Christina Aguilera picked up Passino after the Blind Audition and he beat Kristen Marie in the Battle Round during a touching rendition of Adele's "Turning Tables." The bump in the road came when Passino was eliminated after his Knockout Round performance of The Temptations' "Ain't Too Proud To Beg." I mean, he was going up against powerhouse Alisan Porter. Luckily, Williams had a soft spot for the Michigan native and brought Passino back to The Voice stage as his coach's comeback. And, he did not disappoint one bit, holding his own in the competition since then.

Here are the best of Passino's must-see performances on The Voice and before.

The one that started it all during the Blind Auditions.

Though this one wasn't enough to beat Porter in the Knockout Round, it was enough to get Williams to bring Passino back.

A gorgeous version of this Adele tune in the Battle Round.

As part of the Top 12, Fassino took on this classic Michael Jackson tune and hit it out of the park.

7. "Summer Love" (With The University Of Michigan Friars)

In Passino's off-screen life, he's a student at the University of Michigan and part of the a capella group The Friars. In this video from last year, it starts off with the guys thinking they're going to sing "Summer Lovin'" from Grease, but then change gears to sing a rousing version of "Summer Love" by Justin Timberlake.

Also with the Friars, this rendition of the Sam Smith and Disclosure hit song starts off slow and builds to an epic chorus and finish in this performance from 2014.

In this video from 2014, Passino has a solo in this hilarious double entandre song with his college a capella group. But first, they have a marshmallow-eating "Chubby Bunny" competition, because college.

It's so clear from these performances that Passino was always destined to be on The Voice, and now we'll just have to wait and see if he wins.