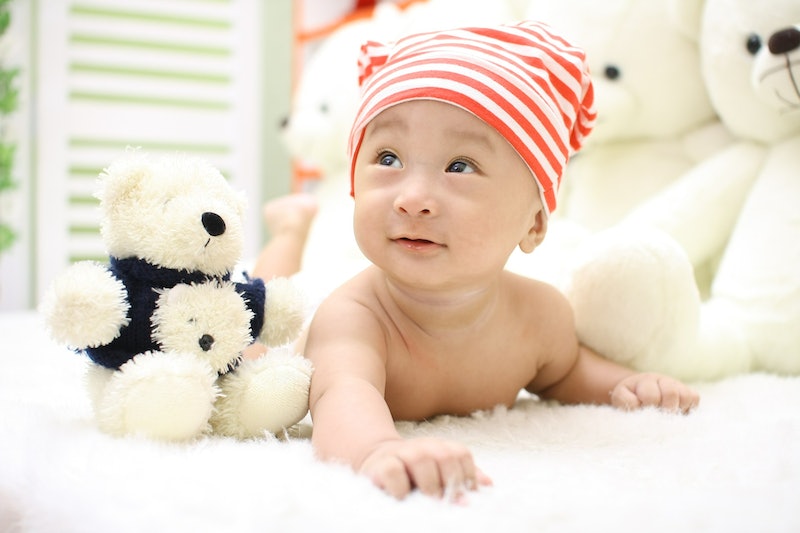 Given the way that babies are often color-coded from the day they are born — pink for girls and blue for boys (a color distinction that is artificial and relatively new) — it should be no surprise to learn that gender stereotyping starts in early infancy. After all, gender is often the very first thing that people announce when a baby is born (“It’s a girl!”; “It’s a boy!”), and it goes on to affect how adults interact with and address children throughout their childhoods. A recent study, however, suggests that gender stereotyping of babies may be even more deeply ingrained than you might think — so ingrained that adults judge babies’ masculinity and femininity by the pitch of their crying, from as early as 3 months of age.

Research published in April in the journal BMC Psychology found that adults tend to assume that babies with high-pitched cries are female and that babies with low-pitched cries are male, despite the face that there is actually no vocal difference between male and female infants. “This research shows that we tend to wrongly attribute what we know about adults — that men have lower pitched voices than women — to babies, when in fact the pitch of children's voices does not differ between sexes until puberty,” study co-author Nicolas Mathevon explained in a press release.

The research team recorded the crying of 28 babies who were an average of 4 months old and played the samples for a group of adults, made up of both parents and non-parents. The researchers artificially manipulated some of the cries, so that they could isolate pitch as the key variable in the study. The researchers found that, not only did the adults assign gender to the babies’ cries in spite of the fact that no auditory gender indicators actually existed, they also used pitch to make assumptions about the baby’s masculinity or femininity when they knew the babies’ gender in advance. “Adults who are told, or already know, that a baby with a high-pitched cry is a boy said they thought he was less masculine than average. And baby girls with low-pitched voices are perceived as less feminine,” said lead author David Reby of the University of Sussex. (You can listen to him talk further about the study in the video above).

The study also suggests that the pitch of babies’ cries — and adult assumptions about their masculinity and femininity — can affect how adults perceive their state of distress. The researchers found that adults in general read higher pitched cries as indicating higher degrees of distress (which means that there’s a possibility that adults may misread a baby’s level of distress due to his or her natural pitch). But they also found a discrepancy in the way that adult men and women perceive babies’ discomfort. When adult men listened to lower pitched crying from a baby they knew was a boy, they assumed that the baby was in more distress than female babies crying at the same pitch. Adult women didn’t have that reaction. “The finding that men assume that boy babies are in more discomfort than girl babies with the same pitched cry may indicate that this sort of gender stereotyping is more ingrained in men,” Reby explained. “It may even have direct implications for babies' immediate welfare: if a baby girl is in intense discomfort and her cry is high-pitched, her needs might be more easily overlooked when compared with a boy crying at the same pitch.”

Becoming aware of how something as subtle as cry pitch can affect gender stereotyping is important because it may have a real affect on how parents and other adults treat children in the long term. “There is already widespread evidence that gender stereotypes influence parental behaviour but this is the first time we have seen it occur in relation to babies' cries,” Reby said. “We now plan to investigate if such stereotypical attributions affect the way babies are treated, and whether parents inadvertently choose different clothes, toys and activities based on the pitch of their babies’ cries.”