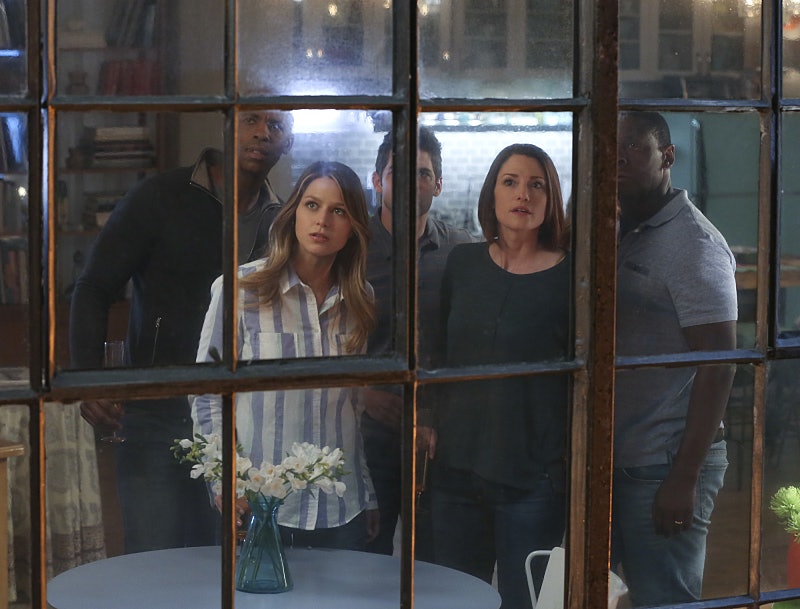 Sometimes even the best superheroes can be thrown off guard, and judging by the look of shock on Kara's face when she opened up the mystery pod in the Supergirl Season 1 finale, this is someone she never imagined coming face-to-face with. And while we'll have to wait until Season 2 (if/when the series finally gets renewed) in order to know who exactly is our next Kryptonian visitor, I'm willing to harbor a guess and say that Kara's dad Zor-El is in the pod. That's right, folks — you heard me correctly. Just like how we all thought Jeremiah Danvers was dead, I think Kara's biological father could also make a surprise return to the land of the living.

So what's made me leap to such an unlikely conclusion, considering both of Kara's parents supposedly died during the destruction of Krypton? Well, honestly, a lot of it has to do with Kara's reaction to seeing whoever it is inside of the pod. She's surprised. She can't believe that she's actually seeing this person, which in itself implies that it's someone she already knows. If it was Zod or some other well-known comic villain, she may not be as familiar with them yet. But a familiar face from her past on Krypton? That would definitely warrant such a surprised reaction.

Now, granted, I'll admit it's a little difficult to understand how Zor-El would've managed to survive if Alura didn't. I mean, did he just leave her behind to die? That wouldn't be a great piece of information to discover. But perhaps they both attempted to escape in two different pods, which somehow led to Alura's death and Zor-El finding himself (much like his daughter) trapped in the Phantom Zone. Or maybe he was trapped inside the confines of Fort Rozz, but its return to space managed to set him free at last?

Pretty much anything is possible in the superhero-verse, so I wouldn't rule any of these possibilities out just yet. Either way, you can't deny how interesting it would be to see Kara reunited with one of her long-lost parents. Not only could this create strain and tension between her and her Earth family, but it could also set up an interesting father-daughter dynamic. Would he join her in her mission to protect National City or would he be alarmed at how openly she's displaying her powers to the world? After all, she was sent to Earth to watch over Kal-El, not establish her very own spotlight. Would he be proud or appalled?

Kara idolizes her parents, so it'd be interesting to see what would happen if Zor-El fell short of her expectations and how that would change and mold the trajectory of her storyline. We may not know for sure if Zor-El is the one in that pod, but if that does turn out to be the case, I think we can all agree that it would make for a super second-season twist.