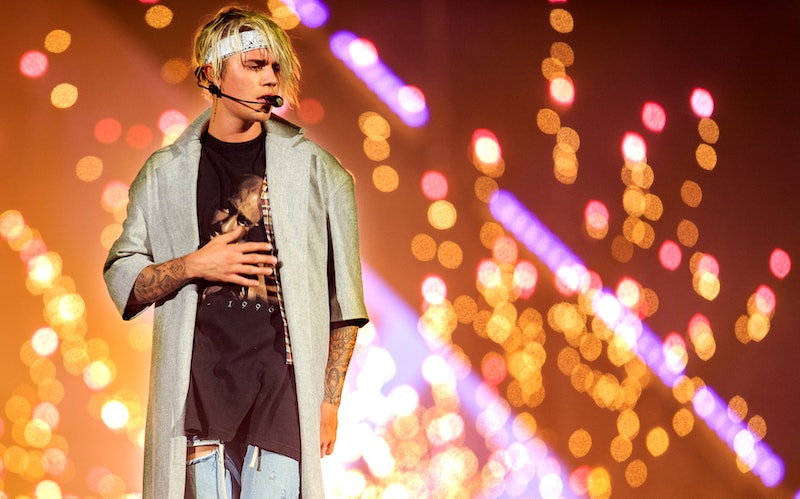 Shakespeare's words might be one of the most influential writers of all time, but turns out his work still doesn't leave as much of an impression as pop songs. According to a new survey, young people know Justin Bieber lyrics better than they know Shakespeare. But not only is this not such a big surprise, I also personally don't think it's worth getting too upset about. Popular culture is, well, popular. That's sort of the point.

In the survey, which involved participants between the ages of 18 and 25, researchers found that 43 percent of young people could identify Justin Bieber lyrics, while only 38 percent recognized lines from Shakespeare. In fact, despite it being one of the most quoted lines of all time, only about a third of people could recognize even the iconic "To be or not to be" line from Hamlet. Which is, admittedly, kind of depressing. Especially since over half the participants correctly identified the author of "Girlfriend, girlfriend, you could be my girlfriend."

The study was conducted in the UK, but there's probably no reason to believe that people on this side of the pond would do any better. I mean, sure we all read the Bard during high school, but I can't imagine we're more up on Shakespeare than the Brits.

So what are we to take from all of this? Well, the instinct might be to throw our hands up in despair at what the world is coming to, but personally, I don't think you need to. For one thing, these results don't indicate that Justin Bieber is more influential, or that his work will be more enduring, or even that people think Justin Bieber is better than Shakespeare. It really just means Justin Bieber is more recognizable — which isn't surprising either.

For one thing, we probably hear Justin Bieber songs more often than we hear anyone reciting Shakespeare. And for another, Shakespeare's name might come with some sort of "high culture" sign flashing in your mind, but his actual words aren't often as recognizable as you might think. For instance, Buzzfeed has a quiz testing to see if people could identify quotes as being by Shakespeare, Kanye West, or the Dril Twitter account. I've read 15 Shakespeare plays and taken two college-level courses on the subject, and let's just say I by no means got a perfect score.

Shakespeare has a particular, highly prized place in Western culture, and he deserves every bit of it — the man was a genius who produced some of the finest art ever created. And against all odds, he's still relevant 400 years after his death, which is further testament to his brilliance. But his work isn't part of popular culture, and that makes him less recognizable. And that's probably OK. Not everyone has to be a Shakespeare scholar, just like not everyone has to be a Justin Bieber fan.

If this survey shows anything, it's that we should probably change the way we teach Shakespeare's work. I remember high school teachers who taught Shakespeare like the point was simply to help us understand the plot and memorize the characters, rather than focusing on the language that makes Shakespeare's work so extraordinary. So maybe if we spent a little more time teaching kids to appreciate Shakespeare's words, not just revere him as some sort of mummified cultural god, they might do a better job of recognizing those words when they come across them.

Or we could just play Justin Bieber instead.