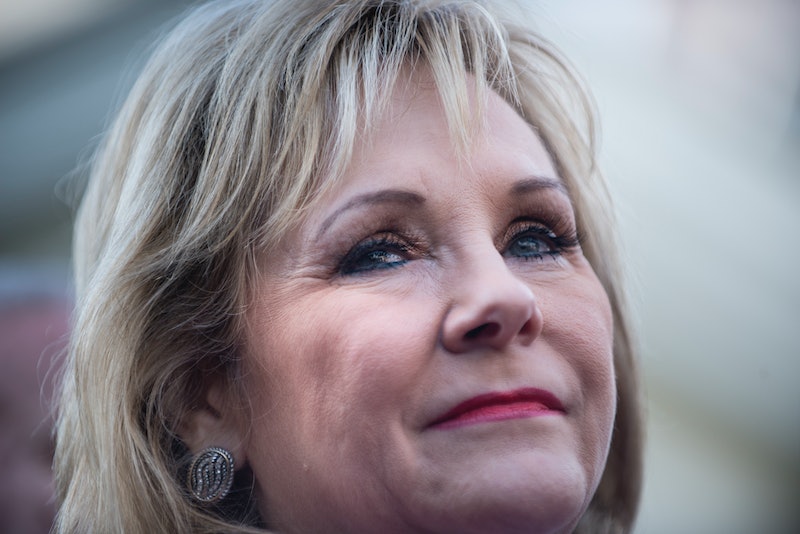 With Tuesday's Acela primary potentially pushing certain candidates decisively toward securing their party's presidential nominations, attention is beginning to turn toward the general election, with chatter over potential running mates. For Republicans, frontrunner Donald Trump remains the most likely candidate to earn the minimum number of delegates needed to become the GOP nominee, placing him at the center of speculation over who could best round out a potential Trump ticket. Recently, the name of one Oklahoma governor was floated to the businessman. Could Mary Fallin be Trump's pick for vice president?

Fallin's name was first tossed into the ring on Sunday by South Carolina Lt. Gov. Andre Bauer on CNN's State of the Union. Bauer said he thought Oklahoma's first female governor would bring a good balance to Trump. "I think you're going to see something different. I think what he will do is he won't go with the norm that you pick a battleground state and you pick somebody from that state or a rival candidate," he said, referencing a political tradition that might not be as effective as some presidential candidates would have hoped. "I think he's going to say, 'Who can help me get the job done?' and I think he needs some balance, and I like Mary Fallin for that reason."

Trump got wind of Bauer's recommendation and tweeted his appreciation for the "great" advice shortly after Sunday's show ended: ".@AndreBauer Great job and advice on @CNN @jaketapper Thank you!"

It's unlikely that Trump will settle on a running mate now, however, as the Republican nomination is still up in the air. But his campaign has said he's leaning toward candidates who are political insiders. "I think my father's been clear that he wants someone that has navigated the D.C. waterways a little more than he has to be in there," Trump's son, Donald Trump Jr., said ahead of Bauer's recommendation of Fallin on State of the Union.

Fallin acknowledged that she'd been floated as a potential running mate for Trump on Monday, but stressed her dedication to Oklahoma. "It's a great honor to even be mentioned as a possible consideration for vice president," she said in a statement. "However, my first and foremost goal is fulfilling my duties as governor to grow the economy while continuing to work on developing solutions for issues and challenges facing Oklahoma."

Trump might want to reconsider Bauer's so-called "great" advice, however. Fallin was once called "the country's worst governor" by MSNBC's Chris Hayes. Furthermore, her controversial anti-LGBT policies could harm Trump's chance at the polls in November. In 2013, after her attempt to violate a Department of Defense plan to extend benefits to same-sex partners of service members failed, she cut benefits to all members of Oklahoma's National Guard rather than see same-sex couples in her state receive federal benefits. In 2015, she signed a bill aimed at protecting clergy members who refused to conduct marriage ceremonies for gay couples for religious purposes. More recently, she's mulling a bill that could revoke the medical license of any doctor who performed an abortion unless it was needed to save the mother's life.