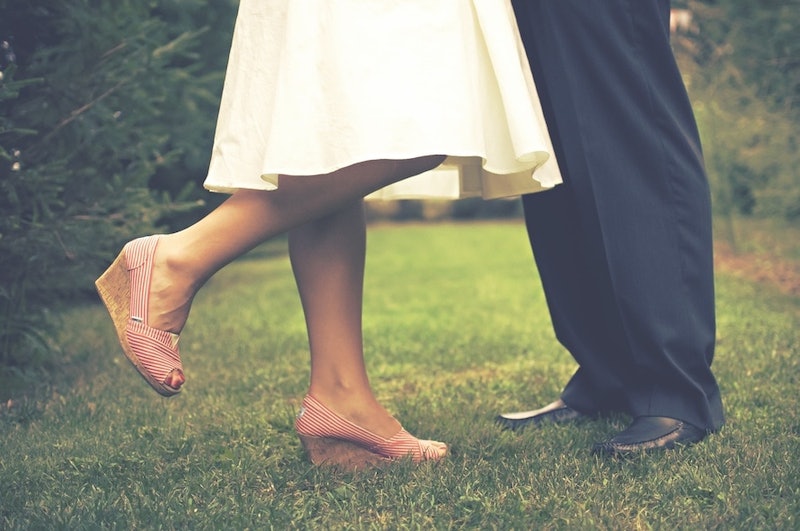 Dating is so daunting at times, especially when the dates don’t go as we’d hoped they would. Dates don’t have to always be disastrous, especially when you’re armed with some of the weird dating tips every single person should know. Not only have many people spent a lot of time thinking about what’s gone wrong on dates, there have also been many people who have spent some serious time studying dating and various behaviors that can make or break someone’s dating life. This article will highlight some of those scientifically sound tips and aim to improve all of our dating lives.

In my opinion, first dates are the worst unless I already know the person well enough to feel super comfortable. If they're an outing with a stranger, I dread them because I always seem to do something to screw it up — whether that’s coming in with a rigid script of things I want to say to sound as lovely as could be, or by zoning out while they’re talking, or by trying to pull the laid back, subtle move and pretend I’m not interested when I really am. Regardless, I feel like I always do something that throws it off. Luckily, a lot of very smart people have done a lot of very interesting research on dating and ways to be more likable and interesting. I’m going to share some of that insight with you below so that possibly both you and I can both ace our next dates. Here are 12 weird dating tips that every single person should know, according to science.

Check It Out: Boundaries in Dating: How Healthy Choices Grow Healthy Relationships, $11, Amazon

I’ve done this for sure — headed into a date I was nervous about with a script of what I was going to say. While I’m normally a pretty decent conversationalist, the date felt so forced and uncomfortable, and I’m sure the guy felt the same. We never went out again. According to a study published in the journal Personality and Individual Differences, when those who are dating rehearsed lines ahead of time — like a job interview — it ultimately had a negative effect on the date itself. This includes forced topics that don’t reveal anything personal about the other person (like this great question I used on said date, “So, this weather is the worst, huh?”). Rather, the study’s authors suggested topics like generosity, culture, and athleticism to be winning ones to impress.

2. Arrive Before Your Date

Think being late is fashionable? Not so much. According to social psychologists Eli Finkel and Paul Eastwick of Northwestern and Texas A&M universities, it’s important that you arrive before your date if you want to be more likable. Their research was specifically conducted on speed dating, and found the ones who sit and wait to be approached are deemed more likable than the ones rotating around the room.

If your date is a lady, research out of Stanford University and the University of California at Santa Barbara suggested interrupting them when they speak — but not in a rude way. The study showed women find it likable when they are interrupted by their date asking them questions that show engagement in the topic at hand. So, if your date is talking about her new job, feel free to jump in with some questions about what she likes so far about the job, and what her day-to-day responsibilities look like.

In the same study out of Stanford University and the University of California at Santa Barbara, researchers found verbiage disliked by men, including “I mean” and “y’know.” Oppositely, the study showed men reported connecting with those who used the word “I” in other manners, such as in a sentence that revealed some personal information.

5. Put On Your Favorite Shade Of Red Lipstick

As you’ve probably heard many times before and in various contexts, your body language plays a big part in how you are perceived. When it comes to dating, this notion is no exception. A study published in the Journal of Experimental Social Psychology showed the most ideal way to express yourself nonverbally when you initially are getting to know someone is in a subdued manner — meaning you should stick to slower movements, small motions, and avoid stepping the line too much into their personal space.

According to research published in Philosophical Transactions of the Royal Society B, we as humans as more drawn to liking people who mimic our movements. Don’t go overboard with this, but try to mimic moves subtly where possible, such as taking a sip of your drink when your date does, or shifting your body in your chair when they do.

No one in the history of dating ever wanted to be perceived as boring, so let’s quickly discuss a way to be more interesting. According to behavioral investigator, founder of ScienceofPeople.com, and Udemy.com instructor Vanessa Van Edwards, a way to be perceived as more interesting — and to be more interested in the conversation you’re having — is to actually be engaged in it. This means not constantly looking at your phone, or peering over your date’s shoulder to see what’s happening behind them. Instead, get yourself delved into the conversation fully, and commit to staying engaged.

If you and your date plan to head to the movie theater, opt for that comedy you’ve heard rave reviews about, or whatever other genre you’re sure you won’t result in tears. Why are tears such a no-no? If your date is a male, take specific note of a study from Science Express. The study found men are less attracted sexually to women who are associated with the smell of tears. Yes, apparently tears have a smell. Who knew? Some of us can’t hold tears back (I cry at everything... like, everything), but try your hardest to save the tear-inducing movie nights for a few more dates into the relationship, maybe.

Say yes to dessert, and make sure your date has a bite, too. Research out of Purdue University showed people are more likely to have romantic thoughts after consuming sugar. Why? The scientists believe it could be that the brain associates sweet tastes with romantic thoughts. So, hand your date a fork, and get to romancin’.

Taking a direct approach can be nerve-wracking, but it might be well worth it, too. According to a study from Personality and Individual Differences, it was found that people in dating situations responded more positively to direct questions from potential mates versus more subtle or tentative questions. If you had a great time on date one, go ahead and put yourself out there by asking for a second date, rather than beating around the bush.

I once dated a guy who didn't correctly spell any words when he texted. Given my career as a writer, it drove me nuts. I liked him (sort of), but our fling was fleeting. When I read about a study conducted by the University of Texas at Austin on texting styles and dating, the dots started to really connect in my head. According to the study, couples with similar writing styles had more of a chance of lasting over a three month period versus those who didn’t (specifically, 80 percent versus 54 percent). This doesn't necessarily mean you have to change the way you text, but if you and the person you're dating can barely read each other's messages without cringing, you may not be meant to be.

Now that you’re schooled in some of the scientifically sound tips for dating, you can head into your next date with ease, and sans any nervousness. You’re going to nail it, I guarantee it.