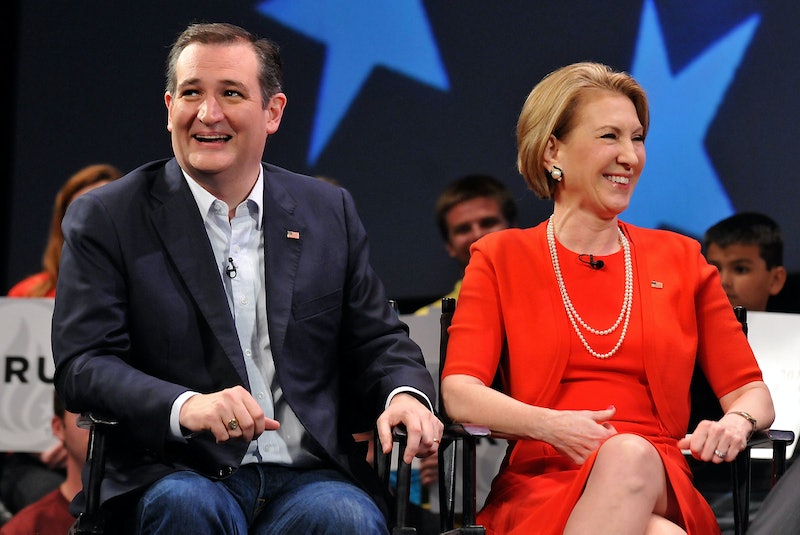 At this stage in the primaries, it's normal to see frontrunners vetting their shortlists of potential vice presidential picks. Ted Cruz — who is decidedly not a frontrunner, but (he is) willing to ignore that small detail — is doing the same. On Monday, Cruz' campaign confirmed Carly Fiorina as a potential pick for the Texas senator should he wrestle the nomination out of Donald Trump's allegedly fun-sized hands. Shortly after TrusTed's team confirmed, a Fiorina aide did the same.

You probably remember Fiorina from the too-damn-crowded debates of earlier this year, but here's her TL;DR resume: She's the former CEO of Hewlett-Packard, has never held a public office (despite mockable attempts at the California Senate race in 2010) and once bit into a dog biscuit while doing some good old fashioned campaign pandering in a BuzzFeed-style video for the Independent Journal. She suspended her campaign back in February and endorsed Cruz soon after in March, hyping up crowds by selling the dildo-banning, aggressively unlikeable candidate as "a leader and a reformer."

It's true, as the Cruz campaign has said, that it's normal for candidates to start whittling down a short-list of potential vice presidential candidates (Trump has been doing the same — albeit to little success) and the names being floated still have a ways to go before we see any #confirmed candidate.

Granted, as far as Cruz surrogates go, Fiorina is a practical choice as both a political outsider and a woman. But, I'm not sold at all on Fiorina's ability to temper the anti-woman politics of a Cruz administration and campaign; I just don't see any way she (or anyone) could fix his woman problem.

Frankly, there isn't any female Vice Presidential pick in my mind that could make up for all the garbage policies Cruz has supported that chip away at women's rights. It's like spraying tiny bit of Febreze on a dumpster — ineffective and still gross.

I'm particularly convinced that Fiorina couldn't accomplish the feat of redeeming Cruz to women. After all, she is in favor of overturning Roe v. Wade, made elaborate false claims about Planned Parenthood at an earlier GOP debate, and is aggressively indifferent to the plights of women fighting for equal pay and better access to birth control. (Oh yeah, and she also said that Democrats have ruined feminism by "[pitting] women against men.") If anything, Fiorina would only add to the dumpster fire of anti-choice and anti-woman rhetoric that dismisses the very real, valid concerns of diverse groups of women as pointless "identity politics."

I'm consistently baffled by the gender math of GOP. It always seems to follow the antiquated idea that the presence of a woman automatically somehow erases rhetoric and policy that goes against woman's interests.

So. it's no surprise that a Fiorina-Cruz ticket appeals to folks who want to see a Clinton defeat come November. Many think that she'll somehow make Cruz more palatable to women and that maybe she could snatch some of that #revolutionary hype away from Clinton's "first woman president" narrative. It's a reductive approach to female voters hinging on a fallacy that women's votes aren't based in policy, but I wouldn't say it's surprising.

However, something I believe all truly pro-women voters know is that floating a woman as running mate for someone like Cruz will never be enough to make him politically palatable to women, especially to ones who care about economic, social, and political equality. Earning that requires more action than words and a resume that includes: supporting women's endeavors professionally and privately, upholding policy that defends the needs of women as they see them and, of course, listening to women. Cruz hasn't done those things — and picking a woman as a running mate won't suddenly make me trust Ted.