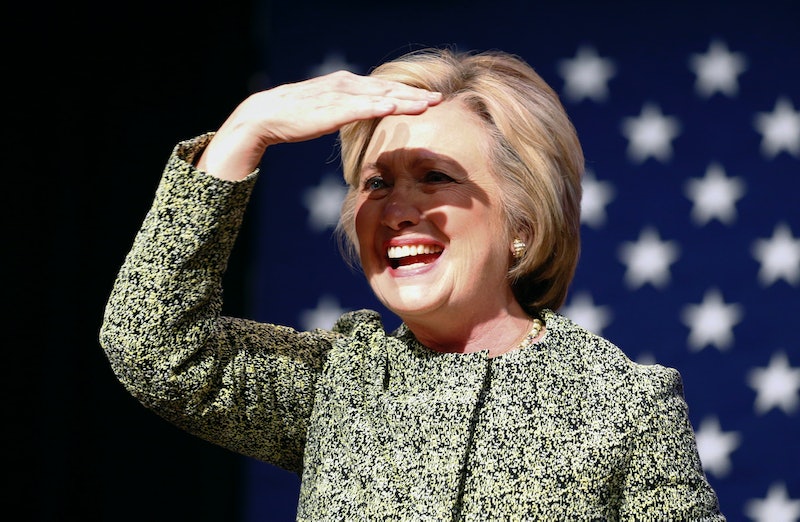 In anticipation of the five "Acela Tuesday" primaries on April 26, MSNBC's Rachel Maddow moderated a town hall with Democratic frontrunner, former Secretary of State, Hillary Clinton on Monday night. During the Philadelphia town hall, Maddow and the audience asked Clinton questions on topics ranging from gun control, to racism in America, to the gender make-up of her cabinet — wondering if Clinton's cabinet will be 50 percent women (if she wins the presidency).

Considering that Clinton is the first woman candidate with a plausible chance at being president, it's not surprising that Maddow asked Clinton about ensuring representation for women in government; however, Maddow's approach to the question focused on another well-known politician and feminist, Canadian Prime Minister, Justin Trudeau. Mentioning Trudeau, Maddow asked Clinton:

Canada has a new prime minister, Justin Trudeau. He promised when he took office that he would have a cabinet that was 50 percent women, and then he did it. He made good on his promise. Would you make that same pledge?

Of course she would! However, Clinton did not take the chance to suggest she would follow in the footsteps of Trudeau, rather she told Maddow:

Well, I am going to have a cabinet that looks like America, and 50 percent of America is women, right?

As beloved — and progressive — as Canada's Prime Minister is, Clinton didn't seem to feel the need to give Trudeau all the credit for wanting to achieve gender parity within government. Rather, Clinton made it clear that she would expect 50 percent of her cabinet to be women — whether or not Trudeau did so in Canada. As a woman in politics, it comes as little surprise that Clinton understands the importance of recognizing women in government, an issue that male politicians in the U.S. seem to be less focused on.

Clinton's proclamation about having her cabinet be 50 percent women may not seem terribly revolutionary in 2016. However, it is. According to The New York Times women hold only 35 percent of the cabinet-level positions within President Obama's administration. This 35 percent is far larger than President Bush's, cabinet — made up of a meager 24 percent women — however, it is significantly smaller than the percentage of women Clinton's husband, President Bill Clinton, appointed to his cabinet: 41 percent. (Closer, but still not equal.)

Unsurprisingly, no president has ever nominated a cabinet that represents America's gender make-up — 50 percent women. It's certainly time for this to change, and if she is elected, it seems as if Clinton will be the president to finally bring parity to the presidential cabinet.