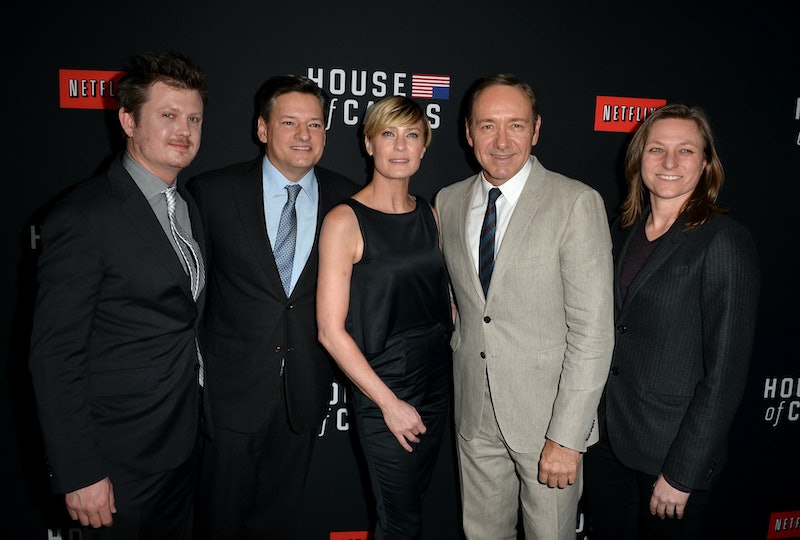 House of Cards's Season 2 dropped onto Netflix in one binge-watch-worthy package this past Friday, and while its plot contains plenty of twists and turns (no spoilers here, promise!), perhaps the biggest surprise came courtesy of star Kevin Spacey in an interview with People magazine. According to Spacey, real-life politicos who watch House of Cards find it relatable. "This is my favorite comment I've heard: 'It's 99 percent accurate,'" Spacey said, quoting the Washington wheelers and dealers whose world he and his Cards co-stars portray. Why not 100 percent? "You could never get an education bill passed that fast," Spacey reports, referring to an arc from Season 1. Well, nobody's perfect.

Time crunch aside, it's pretty impressive that the show's writers were apparently able to capture so clandestine a world so effectively. Most other procedural dramas fall somewhere on the spectrum between "ludicrous wish-fulfillment" (see: scientists with guns and wizard equipment, à la CSI) and "basically accurate with a few stray cinema tropes," in that, say, there's no such thing as "your one phone call" at a police station. D.C. politics, though, have proved notoriously difficult to capture onscreen in the past: A number of critics have pointed out that The West Wing , though admirable, was ultimately unrealistic — and that, in fact, creating a show about the Beltway's never-ending games of inside baseball that was both realistic and compelling would be nigh impossible.

However, House of Cards has apparently pulled it off, due in no small part to Spacey's ability to cut a compelling antihero. As Senator Frank Underwood, he is dark and deadpan and blithely ruthless as only Keyser Söze can be. (Okay, wait, sorry, that was a spoiler — but if you haven't seen The Usual Suspects by now...) Unlike the Josiah Bartletts and Josh Lymans of Aaron Sorkin's White House, Underwood presents no pretensions of do-goodery; he is out for himself, and in that way, it seems, has captured something endemic to Washington.

"There's two things in the world you never want to let people to see how you make 'em: laws and sausages," quips Chief of Staff Leo McGarry on The West Wing, cribbing from John Godfrey Saxe. And it's true: watching these characters' cynicism, their icy calculation, the personal vendettas that bear national implications — it's enough to put you off professional politics for a good while, the same way a day in an abattoir might have you avoiding hamburgers. Still, it's almost comforting to know that House of Cards has it so right: No matter how much you might object to the system portrayed, it's nice to know that there's some sliver of transparency in this insider game, even if it does come in the form of straight-to-Netflix fiction.

After all, in 2012, Hilary Clinton reported that Burmese politicians were watching Sorkin's show to learn the finer points of a democracy, to which she responded "I think we can do better than that." So, should we offer them House of Cards instead?