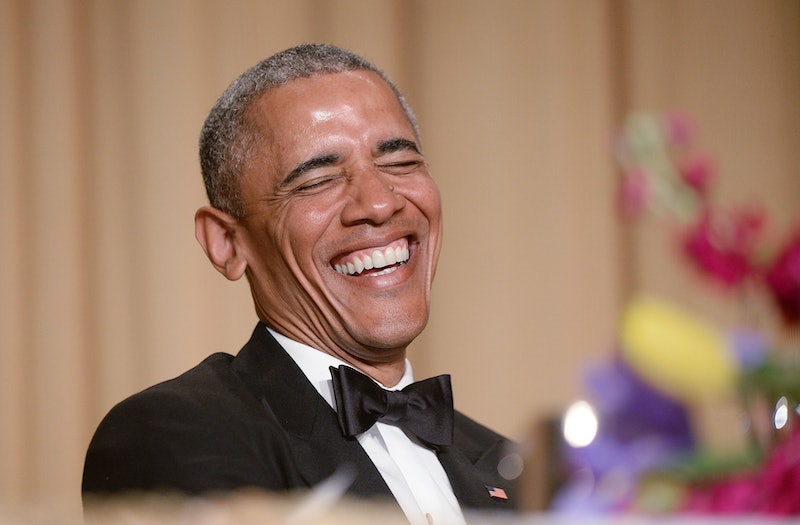 Saturday's White House Correspondents’ Association (WHCA) dinner — an annual event that brings together the big names of Washington, Hollywood, and the press for a night of jokes and food — is bound to be an exciting night full of political barbs and memorable moments to commemorate Barack Obama's last hurrah as POTUS. But, those of you who are hoping to get to bed or maybe grab a drink after a long and exciting night watching C-SPAN may be wondering: When will the White House Correspondents' Dinner end? After all, you'd hate to miss a minute of the Trump jokes, or worse — accidentally mess up your DVR settings.

On the WHCA website, C-SPAN notes that their coverage includes all the pomp and circumstance of "celebrity arrivals, the awards presentations, scholarships, and after dinner speeches, as well as historical information relevant to [the] centennial celebration." They also say that while coverage begins around 6:30 p.m. ET, it generally runs until about 11:15 p.m. ET. But, between all the stars and what will certainly be some hilarious hosting from Larry Wilmore (of Comedy Central's The Nightly Show) that time will most definitely fly by. Wilmore spoke of the hosting honor to Variety, saying, "If I do nothing else in my life, it’s, you know, ‘Your grandpa performed for the president once.’"

Although it's gotten some flack for lacking the star power of previous years, the 2016 event will boast a diverse array of talent that will be dining (and, more importantly, roasting) all evening: From The Boston Globe's award-winning team of journalists and the actors who portrayed them in the Oscar-winning film Spotlight to blockbuster personalities (Miles Teller) to streaming favorites (House of Cards' Neve Campbell and Daredevil's Rosario Dawson) to the all-around perfect star of ABC's Scandal, Kerry Washington, there's someone for everyone tuning into the event.

The WHCA also announced via their website that the publications to be honored at Saturday night's awards include The Boston Globe, CBS News, The Washington Post, The Wall Street Journal, and InsideClimate News. The dinner also recognizes "distinguished print and broadcast journalism" during these annual awards for national and political reporting.

The good news is that you don't need to make Saturday plans, if any of this sounds the least bit appealing to you. Also, as an added bonus, you'll absolutely have plenty of White House Correspondents' Dinner conversation to last you through your Sunday brunch. What else could you really ask for?

More like this
What Is Barack Obama’s Net Worth? He Makes *Way* More Now As An Ex-President
By Hugh McIntyre
BTS Is Visiting The White House To Discuss Anti-Asian Hate Crimes With President Joe Biden
By Jake Viswanath
How To Support Gun Control Reform Right Now
By Morgan Brinlee and Carolyn Steber
10 Times Diana & Meghan Spoke Similarly On The Royal Family
By Sophie McEvoy
Get Even More From Bustle — Sign Up For The Newsletter