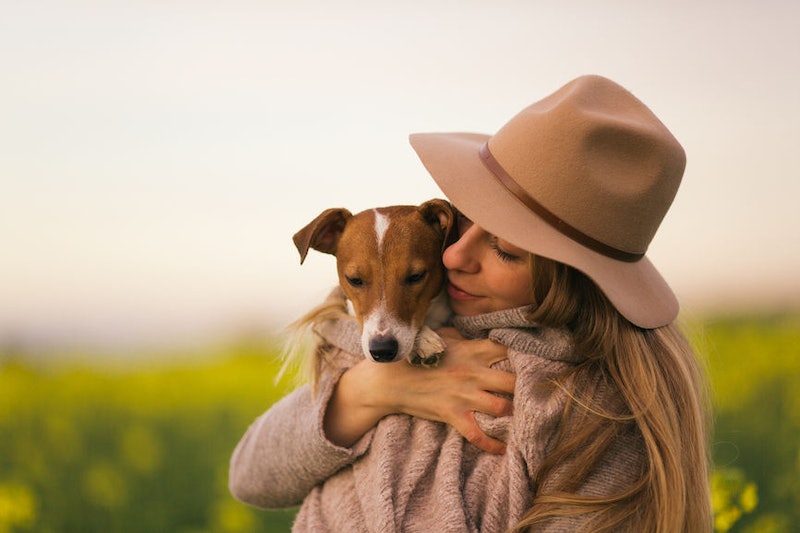 Though I had never owned a dog, I grew up thinking I was pretty good with them. That is, until my roommates and I adopted a rescue dog who turned out to have suffered through a lot in the past and everything I had learned about dog behavior over the years was suddenly wrong. Your dog probably hates hugs, for example. Petting your dog's head can be threatening. Holding out your hand for a dog to sniff can be threatening. And did I mention they hate huges? Because it bears repeating: We should probably all stop hugging our dogs, because according to a new study, it really stresses them out. Sorry, dudes.

In a study recently published by Psychology Today , scientists found that 82 percent of dogs displayed heightened signs of anxiety — flattened ears, heads turned away, whites of their eyes showing — when hugged. And yes, I know that with humans, hugging is an important and necessary element for emotional growth in children... but no matter how much you refer to your dog as your "son," he's still a dog. And there are differences between dogs and humans.

Here's what's going on: When we hug dogaroos, we stymie their flight options. While dogs are not necessarily prey animals, they're still cursorial mammals , meaning that they're inherently designed for swift running (I know that can be hard to believe sometimes, but I promise it's true). When we directly limit their ability to run, their anxiety and stress levels soar.

Yeah, don't do that to them. Here are some ways in which you can show affection, in ways that your li'l pup will actually enjoy and not just endure for your sake. Because dogs are angels sent straight from the heavens, and they deserve to have all the love and affection we can give them — on their terms, of course. It should be enjoyable for everyone, after all.

1. Pet Their Ears, Under Their Chins, And Their Chests

The key here is not to pet their heads. Turns out, head-petting is seen as a dominant action and can put some dogs on high alert. I learned that the hard way (the hard way being that my anxiety-ridden rescue dog bit me and then growled for like 2 hours). Instead, try those alternate petting locations. They'll like it a lot more.

Since dogs can't talk, it's a lot harder for us to gauge when they actually want to show that they like us. Nuzzling or leaning against you is their equivalent to hugs; soft pets from humans are often seen as the equivalent. Don't be one of those people who, like, kind of makeout with your dog — they tend to not love that.

Or something akin to that! Dogs are (probably) pack animals and like to make whomever they consider to be the "pack leader" (hopefully that's you) happy. Plus, going back to our cursorial mammal discussion earlier, dogs need exercise. All dogs. Even pugs. Get them outside and get them moving.

A great alternative to giving hugs! When your dog is being good, let them know! They'll preen for sure. Be consistent with your praise words and enforce them with a treat or a nice, non-threatening pet somewhere other then their head when you can — it will help them associate positive feelings with specific words and actions.

I mean, like, hello. Treats are the best, whether you're a human or a dog. Enough said. (Just don't actually give your pup a chocolate cupcake, because chocolate is poison for dogs.)