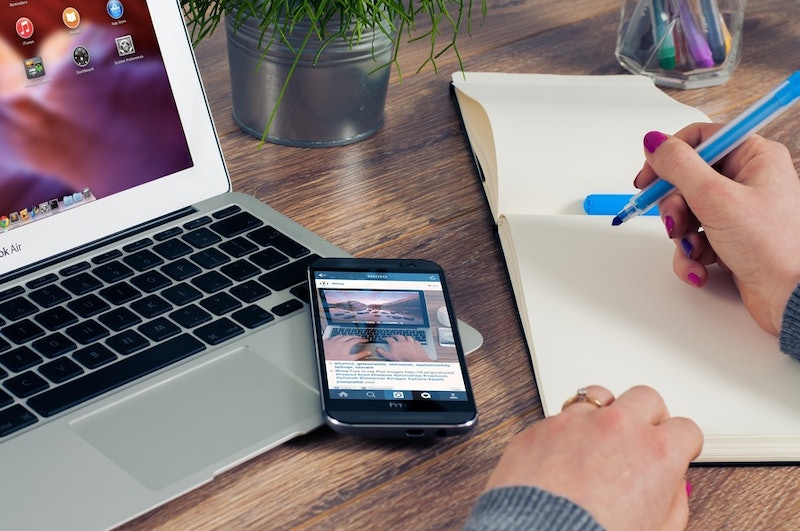 Knowing exactly what you want can be considered a good thing. Having a vision of what your future is like is comforting, after all. But micromanaging every detail of... well, everything can get exhausting. If you feel like you're showing signs that you might be a control freak, there are ways to slow down the obsessive behavior once and for all. Everyone has some controlling tendencies to a degree, and it's particularly helpful to understand where those tendencies stem from, especially if your obsession with control warrants a clinical diagnoses of something more serious.

"A clinical diagnosis for control freak is to describe a person as suffering from obsessive compulsive behavior. They have such anxiety from simply being in the world that they are compelled to micromanage it and the people in it," says licensed Marriage and Family Therapist Dr. Paul Hokemeyer J.D., PhD in an interview with Bustle over email. "Like all clinical diagnoses, this behavior manifests itself in degrees. At the lowest grade is a person who is annoying. At the other end of the spectrum are people who become paralyzed through the rigidity of their controlling behavior and who ostracize themselves from the world. Most people however exist in the middle."

Even when you feel like you're in complete control of everything going on around you, you might actually be more content with your life if you learn to let go. If you're not sure whether or not you're too controlling, here are some signs that someone might be a control freak.

1. You Refuse To Delegate

"When we refuse to delegate, when we believe that no one can do a job as good as we can, so we overwhelm ourselves with tasks, we might be a control freak," says psychologist Nicole Martinez, Psy.D., LCPC in an interview with Bustle over email. Rather than not having trust in someone else's ability or work ethic, allow yourself to delegate some tasks so you won't feel overwhelmed by having so many things on your plate.

2. Everything Has To Be On Your Schedule

If you're the type of person who constantly gets mad over the slightest change in your plans, you might be a little controlling. "If we have to have everything in our home on our schedule and in it's place, as well as done exactly the way that we want it, we might be a control freak," says Martinez.

The desire to be in constant control could mean you're a perfectionist, and highly concerned about how others think of you. According to The Huffington Post, psychologist Monica Ramirez Basco said, “The reach for perfection can be painful because it is often driven by both a desire to do well and a fear of the consequences of not doing well.” One of the only ways you can be perfect in your eyes and in others, is if you're in constant control over everything and anything.

Control freaks tend to be on edge because they're constantly stressed by their own frustrations. According to The Huffington Post, sometimes things just don't go the way you plan and when that happens, your desire for perfection can be interrupted by chronic frustration, moodiness and stress, which could possibly lead to brooding.

While there might be a lot of other reasons why you're controlling, you might do it because it actually makes you feel good. "Control feels good because it stimulates dopamine ... Your brain is designed to reward you with the good feeling of dopamine when you get a step closer to something that meets your needs. The problem is that a bad feeling (cortisol) is released when your expectations are disappointed. Cortisol makes you feel like your survival is threatened, even when you’re safe, because its job is [to] alert you when you’ve gone off course. You can avoid the bad feeling by letting go of your expectations, but then, of course, you don’t get the dopamine and you don't step toward meeting your needs," says Loretta Graziano Breuning, Ph.D. in an interview with Bustle over email.

If you're the type of person who needs to know what everyone is doing at all times, you just might be a control freak. According to INC., micromanagers tend to be demanding when it comes to their employees. They want to be CC'd in every email because they cannot trust their team. Instead, let your employees hold each other accountable so you can relax and feel less stressed.

"Judging others is a form of controlling behavior. It makes the person feel temporarily better about themselves by diminishing the other person," says Hokemeyer. "Unfortunately, in the long term the person who judges suffers greatly because they lack quality relationships in their lives. Judging behavior as a defense against feeling judged. So the person who judges others is hyper critical of themselves and was judged at some point in their lives by some significant person is being inferior in some significant capacity. To avoid the pain they experience from feeling judged they act offensively by maliciously judging others."

No one wins when you choose to judge other people. Try to figure out why you're being so judgmental and see if it's something you can fix within yourself so you can help others grow rather than judge them from afar.

8. You've Been Severely Hurt In The Past

"Control issues are definitely a present manifestation of a past pain. Somewhere, typically very early on, in the persons trajectory of life, somebody hurt them emotionally or they suffered physical injury. This hurt gets embedded in their central nervous system where it causes them to control their life," Hokemeyer. Don't let your past dictate your present. While being afraid of the possible outcome of an unknown situation might be terrifying, it might be a better idea to take a deep breathe and trust that your past won't be repeated again.

9. You Control Your SO's Financial Situation

Even though money can be a touchy subject in relationships, it's better to vocalize your concerns instead of trying to control how your partner spends their money. "Couples typically try to control each other through money. They make their partners justify their expenses and criticize them for spending on things that they deemed unworthy of expenditure," says Hokemeyer.

"Constant criticism is another way of controlling. They criticize the clothes they wear, their friends, their career choices, their food choices. No matter what their partners say or do, it never seems to be good enough," says Hokemeyer. If you're constantly critiquing the people you care about, you may eventually push them away. Let your friends and family be who they want to be and give them support whenever they need it rather than forcing them to do what you want.

While having complete control over your life is not necessarily a bad thing, managing how other people live their lives can be. Try to only worry about yourself and let everybody else do their own thing, and you might be surprised how much better you feel about everything.