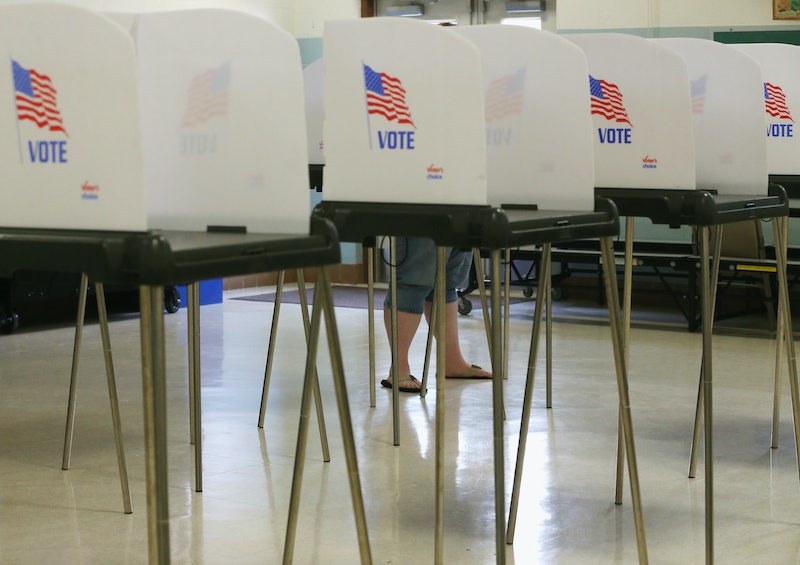 The 2016 primary season kicked off on February 1 with the Iowa caucuses. That day seems so far away after the waves of contests that have followed. But there's plenty more where that came from. After the April 26 primaries, there are still several primaries and caucuses — and, with them, delegates — to be won by our nominee hopefuls on both the Republican and Democratic sides. How many primaries and caucuses are left?

The number is different for Democratic and Republican nominees. There are 10 primaries and four caucuses remaining for Democratic nominees Sec. Hillary Clinton and Sen. Bernie Sanders, according to Frontloading HQ. Only one state will be holding caucuses, and that's North Dakota. The other caucuses will take place in the territories of Guam, Puerto Rico, and the Virgin Islands.

The states holding Democratic primaries in May and June are: Indiana, West Virginia, Kentucky, Oregon, California, New Jersey, Montana, South Dakota, and New Mexico. Washington, D.C. will also hold a primary, wrapping up the season on June 14. Ballotpedia reported that about a quarter of the total pledged delegates for the Democratic candidates remain to be won from these 14 states and territories. We're entering the home stretch, but there's still plenty of space between April and the finish line.

On the Republican side, there are 10 contests left, and they are all primaries rather than caucuses, reported Frontloading HQ. States that have yet to cast their ballots for Donald Trump, Sen. Ted Cruz, or Gov. John Kasich are: Indiana, Nebraska, West Virginia, Washington, Oregon, New Jersey, Montana, California, New Mexico, and South Dakota. According to Ballotpedia, about 21 percent of all Republican delegates are up for grabs in these primaries. As with the Democrats, the race is still on.

But it's a different kind of race between the two parties. On the Republican side, Trump is the only candidate for whom it is mathematically possible to win enough delegates in remaining races to secure the nomination. The question for the right, then, is whether he does so, or whether Cruz and Kasich successfully keep him from the 1,237 he needs. Framed another way, the question is: Will we have a contested Republican National Convention in July?

There's more of an actual race between two candidates on the Democratic side. The question there is whether Sanders will be able to narrow, and ultimately overcome, Clinton's lead, or whether the former secretary of state will maintain and widen the delegate gap to clinch the nomination. We might have to wait for answers to all these question until the late-state voters have their say in June.