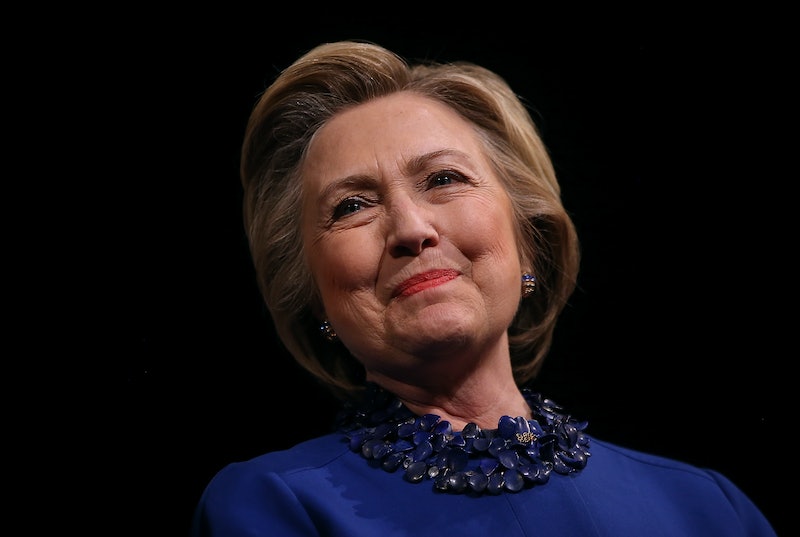 With the Democratic National Convention looming in late July, the party's nominating race continues to approach its conclusion, and things got a whole lot clearer on Tuesday night. Voters in Connecticut, Delaware, Maryland, Pennsylvania and Rhode Island cast their votes to help decide this months-long primary race between former Secretary of State Hillary Clinton and Vermont senator Bernie Sanders. And that means it's time to check out the delegate count! So, how many delegates did Hillary Clinton win on Tuesday?

Barring the massive California primary coming up on June 7, Tuesday night's five-state swing is one of the most crucial dates on the primary calendar so far, both by virtue of a big delegate trove, and just how late it's getting in the whole process. All in all, there were 384 pledged delegates on the line, and heading into the voting Sanders' campaign was already facing some daunting delegate math, trailing the former New York senator by 244.

So, did Clinton manage to expand her lead? In a word, yes. All the polls heading into Tuesday suggested that it would be a big night for the Democratic frontrunner, and they were largely validated by the outcome. At the time of this writing, according to The New York Times, Hillary Clinton has claimed no less than 204 of the 384 pledged delegates up for grabs on Tuesday.

While you've probably heard it before, since the fundamental dynamics of the Democratic race have remained constant for the last few months — Clinton built a stable delegate lead in the early states, and has kept it intact all throughout — this was a rough, rough night for Sanders. Thanks to the Democrats using a proportional system of delegate allocation, it's hard for an underdog to make up ground, since even narrow victories don't move the needle very much. You need to score big, lopsided wins to vault yourself back into a competitive position.

That didn't really play much of a role on Tuesday, however, since Clinton had such a dominant night. No matter what spin you might want to put on it, losing is losing, and Sanders' losses are coming at the worst possible time while Clinton's campaign is cresting at more or less the perfect time. Basically, the general election train is now clearly pulling away from the station — it's really just a matter of how many of Sanders' supporters are willing to climb aboard.