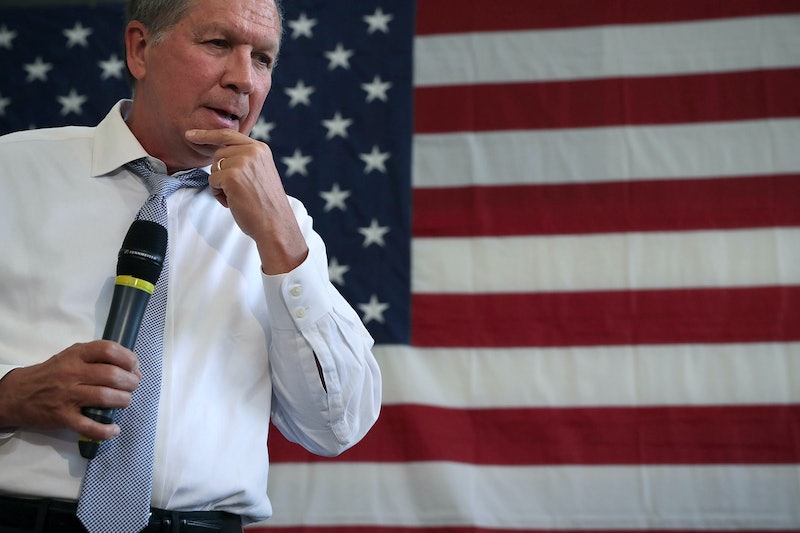 It's mathematically impossible for Ohio Gov. John Kasich to win the number of delegates he needs in order to secure the Republican Party's presidential nomination, barring a battle at the convention. In fact, it has been impossible for Kasich for some time now, as the Ohio governor has struggled to compete with frontrunner Donald Trump and rival Sen. Ted Cruz throughout the GOP's primaries and caucuses. On Tuesday, he didn't make up much ground, as Kasich won at least five delegates in this week's round of Eastern primaries.

Republicans in Connecticut, Delaware, Maryland, Pennsylvania, and Rhode Island voted on Tuesday. Together, these fives states had more delegates up for grabs than Kasich had won in last three months of contests, since the Iowa caucus kicked things off back in February. In total, Kasich had won 148 delegates before Tuesday, and some 172 delegates were on the table in Tuesday's Republican primaries. Although, to be fair, most of Pennsylvania's delegates are unbound — and therefore unaffected by Tuesday's result in the state. Still, Kasich went into Tuesday's primaries almost 700 delegates behind Trump and nearly 400 behind Cruz.

Clearly, Kasich wasn't expecting to surpass his opponents on Tuesday, but he still needed to win as many delegates as possible. At this point in the race, Cruz and Kasich need to prevent Trump from reaching the 1,237-delegate threshold needed to secure the GOP's nomination. They recently teamed up for just that effort.

Although Trump won big on Tuesday, claiming victories in all five states, it wasn't a total wash-out for Kasich. Kasich came in second in Rhode Island. The proportional delegate allocation in the Ocean State allowed him to pick up at least five of Rhode Island's 19 Republican delegates. The Ohio governor also came in second in Connecticut, Delaware, and Maryland, but he likely didn't do enough to claim any pledged delegates.

So, it wasn't a wash-out for Kasich, but it was about as close to a wash-out as it could have been. A single-digit delegate haul is nowhere near enough for Kasich to slow Trump down. After all, more than 100 delegates were up for grabs on Tuesday, and the overwhelming majority went straight to Trump. In fact, Kasich didn't win a single county in Delaware, Maryland, or Pennsylvania. It's worth noting, though, that there's still the opportunity for Kasich to secure a load of delegates in Pennsylvania. Out of the state's 71 Republican delegates, 54 are unbound, meaning they are not allocated by the state's primary. Rather, they can vote for whomever they want at the GOP's convention in July. These delegates were not included in Tuesday's totals.

Despite the weak delegate haul on Tuesday, Kasich's campaign appears to be going strong. If his new strategy with Cruz is any indication, Kasich will likely see his campaign through to the convention. After all, that's likely his only opportunity to win a spot on the GOP's ticket this fall.