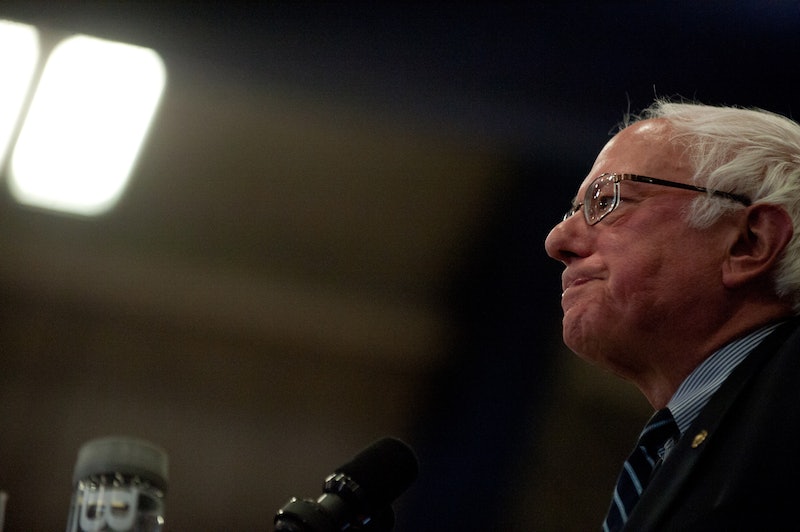 Five states held their primary elections on Tuesday, and Sec. Hillary Clinton expanded on her lead over Sen. Bernie Sanders. Sanders has been fighting from behind since early on in the 2016 primary election for the Democratic nomination. After a long string of wins during the second half of March, April has not been as kind to the Vermont senator. Will Sanders drop out of the race after Tuesday? That is highly unlikely.

There are two reasons to expect anything but a bowing-out from Sanders going into May: his own repeated vow to stick in it until the very end, and the fact that it's still possible (though it won't be easy) for him to get the Democratic nomination. Not all delegates are allocated from Tuesday's primaries, but at the end of the night, Clinton leads Sanders by just over 300 delegates. There are 1,016 pledged delegates remaining in upcoming primaries throughout May and June.

On Tuesday, The New York Times reported on several statements made by Sanders and his campaign staffers concerning whether he'd stay in the race after Tuesday if the results were disappointing. Sanders himself told reporters in Philadelphia on Tuesday morning, "The answer is, we are in this race until the last vote is cast," then referenced California — the state with the most delegates at stake — which won't hold its primaries until June 7. Spokesman Michael Briggs echoed Sanders' point in an email, saying the senator "thinks voters in California, the biggest state in the country, and the other states and territories where Democrats still haven't voted deserve a choice and voice in the democratic process. He's going to give them that choice."

But the most sober, and intriguing, comments came from Tad Devine, Sanders' senior strategist. According to The New York Times, Devine said that, if Sanders' performance on Tuesday didn't make it likely that he'll rack up enough pledged delegates for the nomination, the campaign would "reassess" Sanders' moves going forward to see where else he could pick up delegates from.

Devine suggested that one way Sanders could pick up some more delegates even if he loses in pledged votes is to win them in states that have held caucuses already. This gets confusing; let's use Nevada as an example. After the caucuses in the state in February, Clinton had 20 delegates to Sanders' 15. But, PolitiFact explained, that wasn't the only caucus day in Nevada. The state, and other caucus states, also hold county and state conventions where some of their delegates are chosen. Ideally, the numbers for each side roughly match the popular vote proportionally, but, if more delegates show up for the candidate who lost the vote, that candidate could actually flip a few of the delegates at these conventions that were initially projected to go to the winning candidate.

Sound like a pretty screwy path forward? It gets weirder. Sanders' campaign manager Jeff Weaver has begun saying in recent interviews that the Sanders campaign would try to flip superdelegates in order to tip the nomination his way, even if he had fewer pledged delegates than Clinton. Sanders actually alluded to this himself at a rally in West Virginia Tuesday night as results began pouring in, after mentioning that he has larger leads over Donald Trump in many state and national general election polls than Clinton:

The reason that we are doing so much better against Republican candidates is that not only are we winning the overwhelming majority of Democratic votes, but we are winning independent votes and some Republican votes as well.

Well, obviously, the bit about winning an overwhelming majority of Democratic votes was off, since he's losing in the Democratic primary. But he goes on:

And that is a point I hope the delegates to the Democratic Convention fully understand. In a general election, everyone — Democrat, independent, Republican — has the right to vote for president.

That gives some explanation for why the Sanders campaign might think it's fair to try to woo superdelegates and caucus state delegates even if he's losing the primary vote. The argument seems to go: If Sanders is winning in national polls, but losing in state elections, and if he has massive support from independent voters in open primary and caucus states, then a lot of people who probably would have liked to vote for him in primaries or caucuses might not have been able to.

Whether you agree with the reasoning or not, it's pretty clear from what Sanders and his major staffers have said that this campaign is not giving up, even if it means resorting to some pretty non-traditional methods going forward.