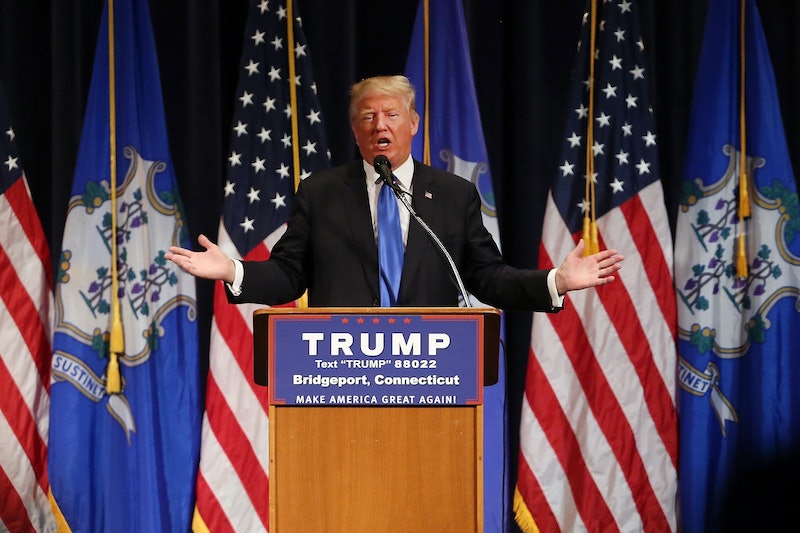 On Tuesday, Pennsylvania, Maryland, Connecticut, Delaware, and Rhode Island held their 2016 presidential primary elections, and the GOP frontrunner was victorious in every single one. Reactions to Donald Trump's primary sweep show just how scared many Americans are that he'll actually win the Republican nomination, and maybe even become president. He still doesn't have the needed 1,237 delegates to secure the nomination, but he's well on his way.

Despite Ted Cruz's and John Kasich's efforts stop his rise to the top and ensure a contested Republican convention, the billionaire continues to beat both of them badly. Before Tuesday, the two candidates on team #NeverTrump joined forces in an attempt to actually keep Trump from winning states — releasing statements that Cruz would stop campaigning in Indiana and Kasich would pull out of Oregon and New Mexico, their campaigns are essentially paving the way for the other to win certain states to prevent more Trump victories. Unfortunately for them, the #NeverTrump movement isn't really working yet.

When the news broke that Trump took a clean sweep of the Pennsylvania, Maryland, Connecticut, Delaware, and Rhode Island primaries, those who didn't vote for him had a lot of feels. Here are some of the best Twitter reactions to the GOP frontrunner's massive victories Tuesday.

On Moving To Canada

On The Republican Party

On A GOP Live Feed

On The General Election

On Trump And Hillary Clinton

It was a big night for Trump, and a wake-up call for many others.