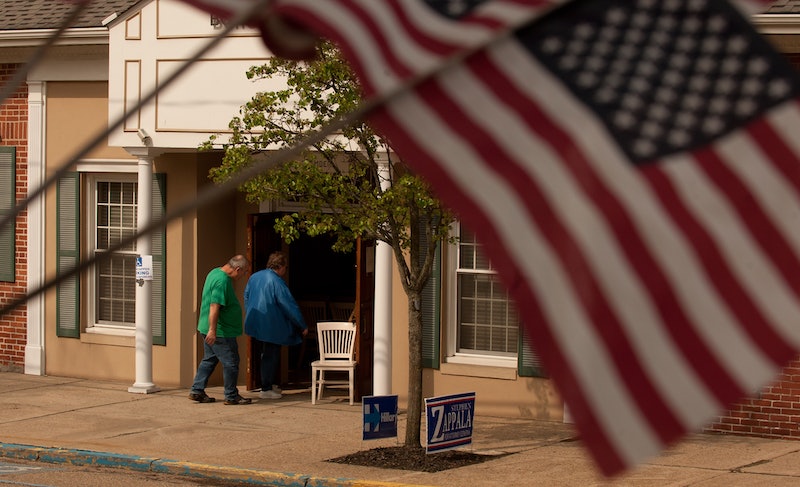 Although it was the first state in the nation, Delaware is never the first state to vote in presidential election years. In fact, it's typically one of the less decisive states for candidates hoping to secure their party's nomination, as it's both small and late in the primary season. That's not to take anything away from the nation's first state, but rather it's to say that Tuesday's primaries were set to be particularly exciting, as voter turnout in Delaware was expected to soar thanks to the highly competitive nature of this year's campaigns.

As The News Journal in Wilmington, Delaware, pointed out, the parties' nominations are usually all but decided by the time the primary calendar turn to Delaware voters. That's because, in most election years, candidates tend to drop out early to make way for the clear winner ahead of the summer nominating conventions. This year, though, things have gone a little differently, with campaigns on both sides of the race kicking it into overdrive this spring, rather than slowing down as you'd expect. As a result, voter turnout was expected to be particularly high, following the same trend as several of the other states that have already voted this time around.

In the end, Delaware voters sided with what seems to be the consensus on each side of the race. The state went to Trump on the Republican side, and Clinton on the Democratic side. From preliminary vote totals, turnout appeared to meet high expectations. Like so many states, Delaware's primaries were closed, meaning that voters had to be registered with a specific party in order to vote. The deadline to register with the state was April 2, but the deadline to be registered with a party was Feb. 26. As of March 1, there were more than 184,000 Republicans and more than 310,000 Democrats registered to vote in the state. On Tuesday, more than 67,000 Republicans voted in Delaware's GOP primary, creating a voter turnout rate of about 36 percent. At the same time, more than 92,000 Democratic voters participated in their primary, yielding a turnout rate of nearly 30 percent.

Delaware's voter turnout rates on Tuesday were on par with turnout rates across the country throughout this year's primary election cycle. Several states have seen record-breaking turnout rates of 30 percent or higher. What's remarkable at this point isn't that voters are turning out, it's that they're turning out even this late into the primary season.