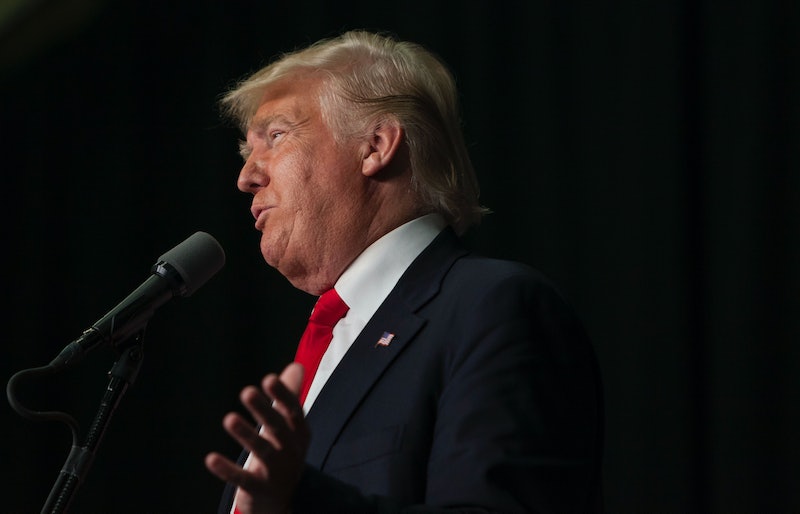 Donald Trump cleaned up good on Tuesday, winning well over 50 percent of primary votes in the five states that held their contests. The delegate bump he received put a dent in the hopes of Sen. Ted Cruz and Gov. John Kasich, who are hoping for a brokered convention in July. But Trump wasn't only thinking of himself on Tuesday night; during his victory speech, he took a moment to throw a little advice to another presidential candidate: Sen. Bernie Sanders. Trump thinks Sanders should run as an independent.

Trump offered his advice before a crowd of his fans, some of which booed at his suggestion, while others laughed. His reasoning started off on a rather sympathetic note, but turned a bit condescending toward the end there:

The Democrats have treated Bernie very badly, and frankly, I think he should run as an independent ... I actually do ... The system is a bad system, and whether it's their system or our system, you look at what goes on. But you know, the best way to beat the system is have evenings like this where you get record-setting votes, where you get record setting delegates.

The gist seems to be that Sanders, who did not have a stellar performance on Tuesday, can't beat the system in the same way that Trump can, so he should work outside the system by running as an independent.

Politico reported that Trump himself threatened to renege on his pledge not to run an independent bid and to support whomever the Republican nominee was if he didn't secure enough delegates to be that person. He cited unfairness as the reason, accusing "the establishment" of running television ads against him. He has also railed against the rule that a nominee must get a majority, and not just the most, votes to win the nomination. Of course, as he moves closer to attaining that majority, he may feel less upset about that rule.

Though Sanders is no stranger to feeling like his (adopted) party is treating him unfairly, he has said time and again that he will support Sec. Hillary Clinton if she is the nominee, and will not run an independent campaign. The Vermont senator's wife, Jane Sanders, repeated this sentiment in response to Trump's advice, which he also tweeted earlier on Tuesday. In an interview with CNN, Jane reminded viewers of Bernie's concern about an independent run having a "spoiler effect" on the presidential election in November, taking voters away the Democratic nominee and tipping the race to a Republican candidate:

Trump's advice to Sanders might come form a place of genuine empathy, from one anti-establishment candidate to another (albeit of a very different sort). But it would also possibly benefit Trump if he does indeed clinch the Republican nomination in November. Sanders himself wants his voters to vote Democratic in November even if it means not voting for him, but according to one poll, about a quarter of his supporters are "Bernie or Bust" and say they plan not to vote for Clinton if she's the nominee. That's a big chunk of voters that could be missing from the polls, or voting third-party, in November. If Sanders actually gave his supporters a chance to vote for him (aside from just writing him in) at the general election, that number may grow even larger.

It's pretty clear that Sanders isn't taking The Donald up on his free advice. He may not be "beating the system" by being ahead in the primary, but Sanders is not willing to work outside it and risk a Republican president in 2017.