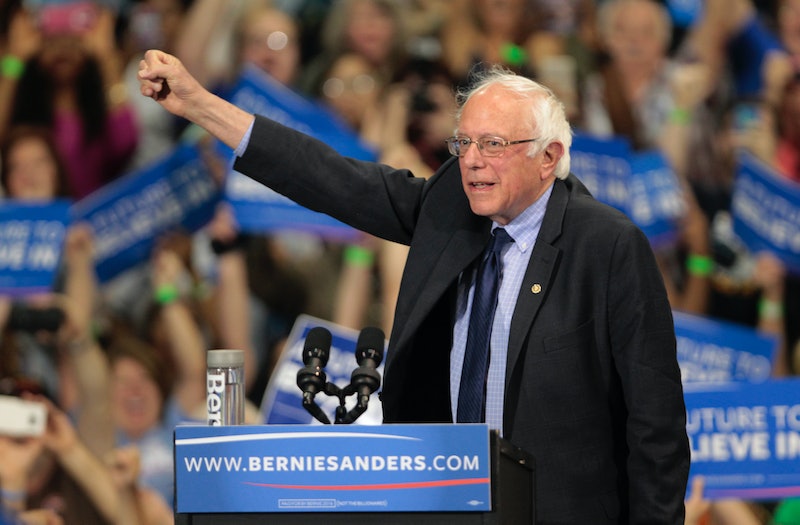 Bernie Sanders suffered monumental losses Tuesday when Connecticut, Maryland, Pennsylvania, Delaware, and Rhode Island took their turn in deciding which presidential candidates to back. Hillary Clinton walked away with strong victories in every state except Rhode Island, further securing her lead in the overall delegate race and making it less and less likely that Sanders can win the Democratic nomination. While not impossible, it's highly improbable at this point in the primaries.

In Tuesday's "Acela primaries," Sanders won delegates in every state, even beating Clinton in Rhode Island with 13 of the state's 24 delegates, but Clinton's better performance in one of the last Super Tuesday's of the election doesn't bode well for the Vermont senator. Clinton won at least 194 total delegates, while Sanders won at least 129, bringing their total pledged delegates to at least 1,640 and 1,331 respectively. With the unpledged delegates who have already confirmed their support for either Democrat, Clinton has an even stronger lead.

There are 14 Democratic primaries left through mid-June, and The New York Times' Nate Cohen pointed out that Sanders would have to win all 14 by at least 30 points in order to reach Clinton's number of pledged delegates. A lot of the Democratic races have been pretty close, and Sanders has only outperformed his party rival by 30 points once — in Vermont.

Sanders said in a speech and a statement released Tuesday night that he intends to compete in all of them. However, he implied that his campaign will shift from its nomination focus, writing in the statement: "I look forward to issue-oriented campaigns in the 14 contests to come." The statement continued:

The people in every state in this country should have the right to determine who they want as president and what the agenda of the Democratic Party should be. That’s why we are in this race until the last vote is cast. That is why this campaign is going to the Democratic National Convention in Philadelphia with as many delegates as possible to fight for a progressive party platform.

Essentially, he's staying in the race to push for more progressive agendas on the party's (i.e. Clinton's) 2016 ticket.

Donald Trump suggested Tuesday that Sanders should run as an Independent, tweeting: "Bernie Sanders has been treated terribly by the Democrats — both with delegates & otherwise. He should show them, and run as an Independent!" Sanders' statements confirmed that he plans to remain in the Democratic race until the convention this summer, so it's unlikely that he'll take Trump's advice despite his grim prospects.

Although the Vermont senator has a very, very small chance of winning the nomination, he's in it for the long haul and doesn't plan to stop campaigning.