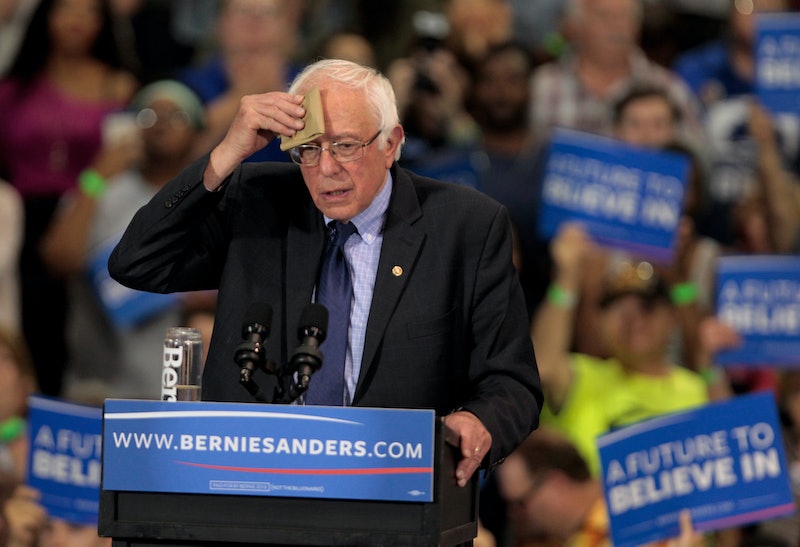 Tuesday night was not a good night for Vermont senator Bernie Sanders. Already trailing Democratic frontrunner Hillary Clinton by more than 200 pledged delegates when the day began, with primaries in five northeastern states on the schedule (Maryland, Rhode Island, Pennsylvania, Delaware, and Connecticut), the progressive firebrand got positively shellacked. He lost four out of the five states, winning only Rhode Island, and his deficit got even wider ― now, he trails Clinton by 309 pledged delegates. Which led to this: Bernie Sanders is clearly winding down his campaign, so you probably shouldn't expect to see him fighting Clinton with quite the same pointed vigor as he has over the last several months.

As Vox's Matthew Yglesias aptly noted on Tuesday night, there's at least one very good reason to think Sanders will be taking a lighter, less indicting tone in the weeks to come. Following the disappointing returns rolling in, Sanders issued a statement congratulating Clinton on her big night, and very conspicuously not making any kind of statement regarding the Democratic nomination. It's subtle, sure, but it reads like the statement of a candidate who's beginning the hard, agonizing process of accepting his fate, pivoting from a campaign against Clinton to a campaign strictly to influence Clinton.

Here's how the statement read, in full:

I congratulate Secretary Clinton on her victories tonight, and I look forward to issue-oriented campaigns in the 14 contests to come.

I am proud that we were able to win a resounding victory tonight in Rhode Island, the one state with an open primary where independents had a say in the outcome. Democrats should recognize that the ticket with the best chance of winning this November must attract support from independents as well as Democrats. I am proud of my campaign’s record in that regard.

The people in every state in this country should have the right to determine who they want as president and what the agenda of the Democratic Party should be. That’s why we are in this race until the last vote is cast. That is why this campaign is going to the Democratic National Convention in Philadelphia with as many delegates as possible to fight for a progressive party platform that calls for a $15 an hour minimum wage, an end to our disastrous trade policies, a Medicare-for-all health care system, breaking up Wall Street financial institutions, ending fracking in our country, making public colleges and universities tuition free and passing a carbon tax so we can effectively address the planetary crisis of climate change.

You might notice that this is a pretty conciliatory and restrained statement, as these things go. At the very least it's a far cry from what happened on the eve of Sanders' disappointing defeat in the New York primaries, when his campaign manager Jeff Weaver was insisting to MSNBC's Steve Kornacki that the campaign might pursue a pure superdelegate strategy.

To the contrary, the stuff about an "issue-oriented" campaign to come, and the "fight for a progressive party platform" telegraph very clearly that Sanders knows the score, despite his stated intention to stay in the race to the convention in July. Namely, that his delegate deficit is insurmountable, which means the superdelegates will not support him (rightly so, if you care about preserving the most democratic outcome). Which means, in simple terms, that his chance to be the Democratic nominee is well and truly over. He's not staying in the race because he actually believes he can win anymore.

Rather, he's staying in to make sure the power and passion of his coalition isn't forgotten or conveniently swept aside, to exert the influence he has on hitching the Democratic Party to a new, far more progressive platform. This has, in a way, always been the most realistic approach for him to take. Although Sanders does enjoy the support of thousands upon thousands of black and brown Americans, and it's important to note and respect that, the relative whiteness of his base ― in a party that relies so heavily on voters of color ― always made the chances of him winning far more remote and unlikely than popularly understood.

If Sanders is indeed now transitioning to a less combative, more influence-based approach for the remainder of his candidacy, it's not a total surprise. Earlier on Tuesday, The New York Times reported that the Sanders campaign would "reassess" its position after the primary results rolled in. This report was subsequently denied by Jane Sanders, Bernie's wife and trusted political adviser, although her main contention was about whether he'd be staying in the race through to the convention. On that front, he doesn't seem to have any plans to change his mind.