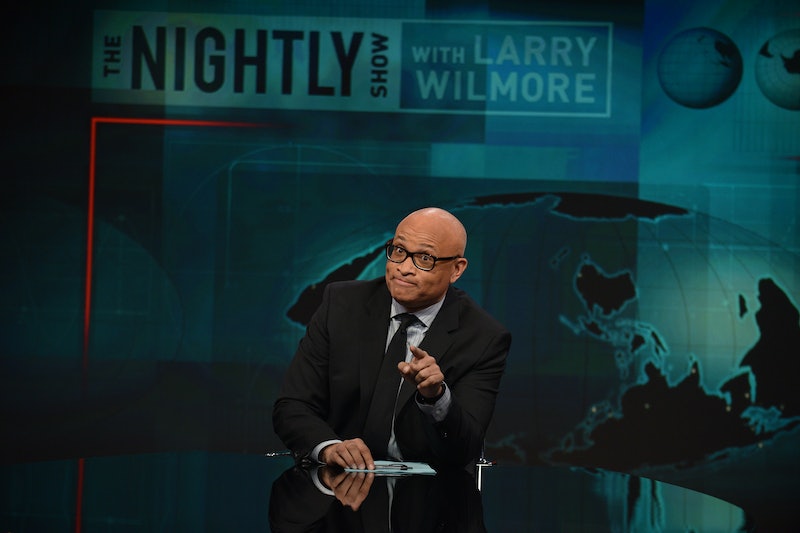 The best political roast of the year is finally upon us. The 2016 White House Correspondents' Dinner is on Saturday and I can't want to hear all of the jokes at our government's expense. This year, The Nightly Show 's Larry Wilmore hosts the WHCD, and if you haven’t seen his Comedy Central series, watching him at the event should turn you into a fan. And if that's the case, you'll need to know how to stream The Nightly Show, so you can continue to watch Wilmore's comedy even after Saturday's festivities end.

Even though Wilmore is now a pro when it comes to cracking political jokes, he's still scared to stand up and joke about the leader of the free world. "Oh, it absolutely is a scary night,” he told CBS about the WHCD. “No matter how you slice it, the president is sitting right next to you." One person he's not nervous about mocking, however, is Donald Trump. He recently told CBS This Morning that Trump "is great for comedians." He continued, "The whole Trump fiasco writes itself. He’s so funny and unusual it’s almost impossible to write jokes funnier than the real thing."

Anyone who's already seen The Nightly Show knows that Wilmore doesn't hold back when it comes to Trump, and for everyone else, here's where you can catch the series.

The obvious way to watch The Nightly Show is live on Comedy Central. It airs Monday through Thursday at 11:30 p.m. ET.

The network's website lets you watch full episodes of The Nightly Show for free, with no cable subscription required. Currently, the 16 most recent episodes are available, which should be plenty to get you acquainted with the WHCD host.

Hulu makes full episodes of The Nightly Show available the day after they air on Comedy Central, but you'll need a subscription to the streaming service. Like the network's site, the 16 most recent episodes can also be streamed on Hulu.

If you have a cable subscription to login with, you can watch episodes of The Nightly Show through the Comedy Central app, which is available on many devices, including Apple TV, iPhones, XBox One, and more.

If you want to watch The Nightly Show without any ads, you can buy specific episodes on iTunes. It’s $1.99 per episode or $9.99 for a Multi-Pass, which gives you the most recent episode, plus the next 15 to air.

Full episodes aren’t available to watch on YouTube, but Comedy Central posted various segments and recaps if you just want to catch some highlights.

So don't worry, if the White House Correspondents' Dinner leaves you wanting to watch more of Wilmore's political comedy, there are plenty of ways to check out The Nightly Show.

More like this
What Is Barack Obama’s Net Worth? He Makes *Way* More Now As An Ex-President
By Hugh McIntyre
What’s New On Netflix: A Victoria Justice Rom-Com & The Return Of David Letterman
By Arya Roshanian
What’s New On Netflix: The Return Of 'Bling Empire' & A Rebel Wilson Comedy
By Arya Roshanian
Kanye Walked Out Of Kim's 'SNL' Monologue Because Of These 2 Words
By Jake Viswanath
Get Even More From Bustle — Sign Up For The Newsletter