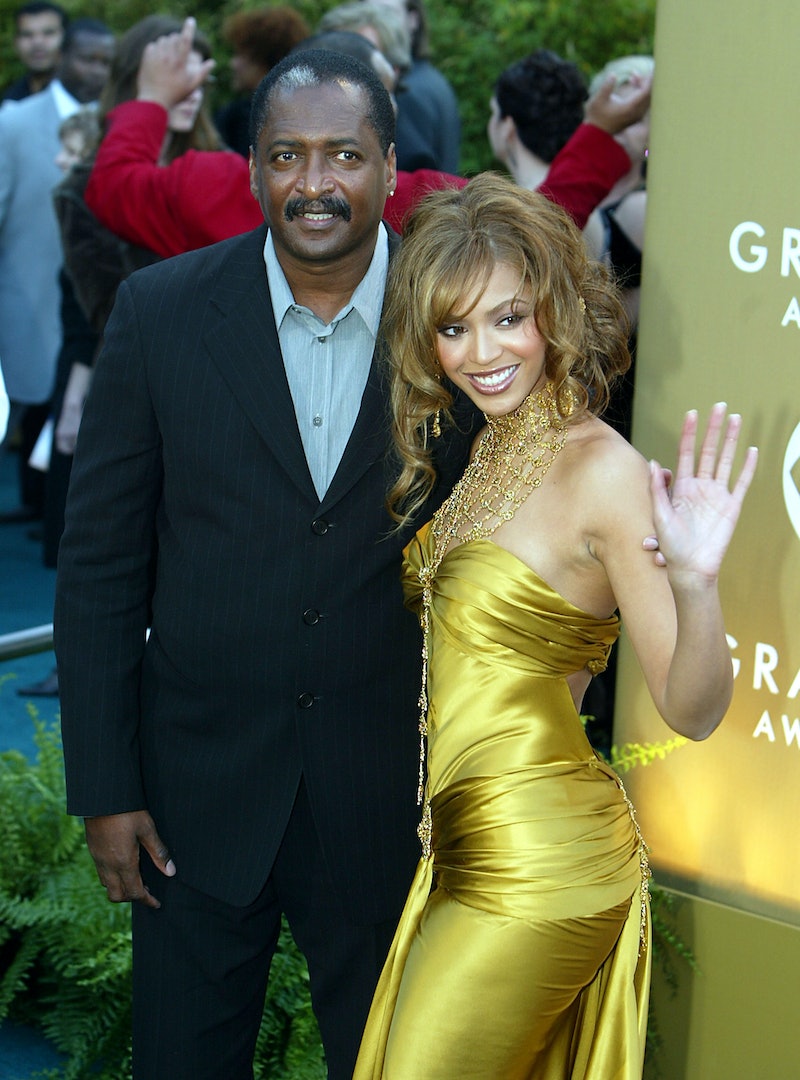 In the wake of the masterpiece that is Beyoncé's Lemonade, the Internet has put on its collective detective hat and deciphered the lyrics in order to figure out who the album is really about (in addition to the mysterious identity of "Becky with the good hair," there are obvious hints on the record that the singer is talking about husband Jay Z and father Mathew Knowles). While the album covers a wide range of themes (everything from celebrating racial identity and female empowerment, to, of course, infidelity), Mathew Knowles is now speaking out about who Lemonade is really about — or at least who he thinks it is.

"I think that's the beauty of her creativity and I think that's what makes it so special, is that it relates to everyone," he added.

Every one of us have been disappointed before and have had to go through the grieving process of anger and, you know, disappointment and then acceptance and forgiveness. And I think that's why this again is touching so many people, because it's universal. Everybody can relate to it.

He's not wrong. Lemonade is chock-full of relatable themes — it's about feminism and loving yourself and celebrating your self-worth and being strong and releasing anger and hurt. And, as Mathew points out, the album seems to document the entire grieving process, as the first half of Lemonade is angry as anything ("Middle fingers up, put them hands high, wave it in his face, tell him, 'Boy, bye'" Beyoncé sings on "Sorry") before it gradually eases into a place of acceptance and forgiveness ("Our love was stronger than your pride, beyond your darkness I'm your light," she sings on "All Night"). But by framing the album in this way, Mathew is glossing over the obvious notion that many of the lyrics seems to pertain to him and how he has affected Beyoncé life.

In the Lemonade HBO special, one of Beyoncé's many badass interludes goes as follows:

You remind me of my father, a magician. Able to exist in two places at once. In the tradition of men in my blood, you come home at 3 a.m. and lie to me. What are you hiding? The past and the future merge to meet us here. What luck. What a f*cking curse.

It's no secret that Mathew cheated on his (now-ex) wife, Tina — he even fathered a child with another woman while still married to her. While not everything on the album is necessarily autobiographical, there's really no doubt that Beyoncé is talking about her father here. And since the majority of the record seems to address the rumors that Jay Z cheated on her, Beyoncé seems to be comparing her husband to her father — and that shouldn't be swept under the rug.

In another interview, Mathew was asked, point-blank, about another Beyoncé interlude — namely, when she wonders, "Are you a slave to the back of his hand?" Sirius XM host Mark Thompson questioned if the lyric referred to Mathew, and the former manager of Destiny's Child, responded:

“I don't know but I don’t think so..." he replied. "I’ve never in my life hit my daughter." When the host implied that the lyric may have been referring to his wife, Tina, Mathew said, "Well, there’s no way that we can get into the mind of Beyoncé. Only Beyoncé can answer who specifically she was talking to." Funny how he takes ownership of revealing who the album is about — "you" — after openly admitting that the only person who truly knows who Lemonade is about is Beyoncé herself.

Furthermore, when asked about "Daddy Lessons," the country song on the album that perhaps most obviously is about her father, Mathew was once again evasive and refused to answer the question.

"I have no reaction, sir," he said. "I know the response you want to get. You’re not going to get that response. But we can sit here and talk all night." It's probably worth noting here that Mathew was the one who requested the interview himself, according to Thompson. Mathew also defended his relationship with his daughter, pointing out the fact that the HBO special shows a clip of him playing with his granddaughter, Blue Ivy, implying that he has a copacetic relationship with Beyoncé.

At the end of the day, it's clear that Mathew wants to discuss Lemonade on his own terms, boldly choosing to ignore the idea that much of the album clearly seems to be about him and how that has played into Beyoncé's own relationship with Jay Z. While it makes sense that he wouldn't want to talk about any negative claims about himself, the fact of the matter is that these are the claims at hand. Mathew Knowles may try to ignore the idea that Lemonade is, in part, about him — but the lyrics speak for themselves.

Bustle has reached out to reps for Beyoncé and Jay Z regarding the cheating rumors, but has not yet received a response.