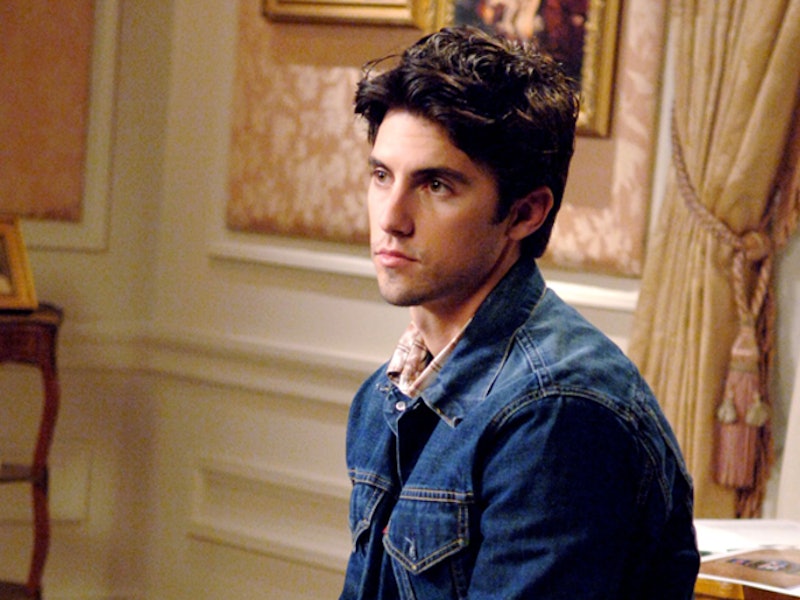 Do you guys know about sweet, ultra-enthusiastic podcast Gilmore Guys where two (male) fans nerd off about Gilmore Girls with important people involved in the show? If you don't, you will, because Milo Ventimiglia was on the Gilmore Guys podcast, and it was a near-perfect slice of podcast heaven. Whether you're into Gilmore Girls or into podcasts or into deftly produced behind the scene material where two guys weave a whole encyclopedia worth of facts into a light-hearted piece of entertainment, there's something just for you, baby. Something like finding out how Ventimiglia became Jess on Gilmore Girls.

The actor, who played Jess with just the right amount of swagger, motorbiked by to give the pair a potted history of his time up until Gilmore Girls. I learned facts, all the facts. If I were ever challenged to a game of Trivial Pursuit again, I'd be crossing my fingers that the board game's developers had added a Jess Mariano section (in my fantasy world, as a replacement for the undeniably impossible Science & Nature section), because, after listening to the podcast, I'm now the leading authority on Jess Mariano in this town.

Want to get an insight into the biography of this uniquely photogenic human and how he ended up on everyone's favorite show? Then please, follow me.

Ventimiglia Was On The Fresh Prince Of Bel Air

Best starting gig ever: he played "Party Guest #1" in the episode "Bourgie Sings The Blues."

He Also Booked An Apple Commercial

Tech savvy youngster cuts a movie on a plane ride, because, obviously. The youngs and their Mac-ddictions, huh?

The show focused on a group of guys going to school somewhere that was previously an all-girls high school and had only recently become co-ed. Ventimiglia attributes the fact the show ended up getting cancelled to it being ahead of its time: "It was early dramedy days when people couldn’t identify what a dramedy was.” He salso eemed to really dig the opportunities the show gave him to try something new. “It was pretty cool, by the end of the pilot I was dressed in drag singing Gloria Gaynor’s 'I Will Survive', which was fascinating.”

So How Did He Go From The Opposite Sex To Gilmore Girls?

"But I was coming off of that show and I had a contract with the studio. At the tail end of that contract, Gilmore Girls presented itself." You can almost hear the collective audience of Gilmore Guys take one simultaneous sharp intake of breath. "It was just an audition…and my contract had expired and I was testing on another pilot called Murphy’s Dozen that Chad Michael Murray — I tested against him — but at the same time I had an audition for Gilmore. Then I found out from my reps that they said, 'Hey, they want to make you a regular right away.' And I said, 'Oh, great, what about this new show?' and they said, 'Don’t worry about it, just go do Gilmore Girls.'"

So then Ventimiglia, being the pro he is, goes to do the audition for the other show, just for the hell of it and has one of the most fun auditions of his career, because there's "zero pressure."

The presenter interrupts him to give Ventimiglia what he's heard about Ventimiglia's casting: “The way Amy tells it, she says we found this very adorable young man, Milo Ventimiglia, we don’t know the part yet, but we just wanted to lock it down.” Ventimiglia confirms that if Amy said so, it must be true. So, yes, the actor is so damn charismatic that he got booked on as a series regular before they even had a character in mind. Because duh. And that's how we got the wonderful, wonderful Jess, all praise.

Check out the podcast in full above. It's well worth extending your lunch break by an extra hour for, trust me.