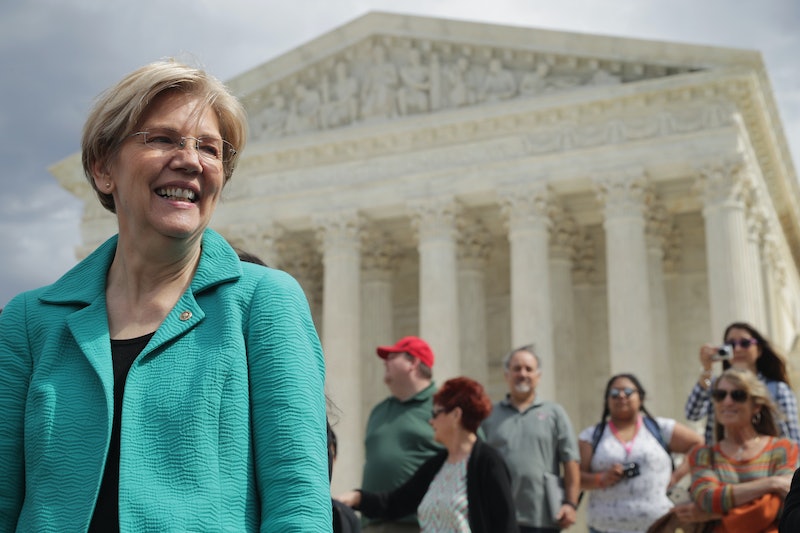 Now that Hillary Clinton's presidential nomination is all but officially confirmed and Ted Cruz has all but picked Carly Fiorina as his running mate, the rumor mill is really starting to work overtime about Clinton's future running mate. There's a ton of speculation about the Clinton ticket and whose name will appear at the bottom, but many experts and supporters clearly have a name in mind: freshman senator Elizabeth Warren. As amazing as it would be to have not one but two women leading the country, there are a few reasons Clinton probably won't pick Warren as her VP.

First, no one has confirmed if Warren is even a Clinton supporter. Warren has declined to endorse a Democratic candidate so far, and given that the vast majority of her Senate colleagues have done so, it seems like she is holding out intentionally so as not to upset the status quo. She has worked with Bernie Sanders in the Senate, cosponsoring over 20 bills together, and Warren and Sanders are actually more similar in ideology than Warren and Clinton. People are already assuming that Warren would support Clinton, but that actually has yet to be proven.

Plus, Warren seems to really love the Senate. She's felt enormous pressure from supporters to run for president herself, but she adamantly rejected the idea several times. "I am not running for president. You want me to put an exclamation point at the end?" Warren told NPR way back in December of 2014. Lately, Warren has been focused on trying to take back the Senate for the Democrats, an important cause that might not be well served if she were pulled into a presidential campaign.

As cool as it would be to see a two-woman ticket, Warren has work to do in the Senate that she seems really passionate about.

Plus, Warren worked as an academic and government advisor for most of her career, and didn't even seek public office until she was 60. Not only does that seem like someone who isn't particularly interested in being vice president, but Warren's experience would also undoubtedly be attacked. Also, Warren often comes across as somewhat of a loose cannon, such as with her recent Twitter attack on Ted Cruz. That kind of unpredictability and fearless honesty makes for a great senator, but maybe not so much a great vice president (see: Biden).

Warren would undoubtedly make a great vice president, but she's also a great senator, and the country can't afford to lose any of those at the moment. Clinton will likely find a candidate who is more dedicated to the ticket and keep Warren as a strong ally in the Senate.