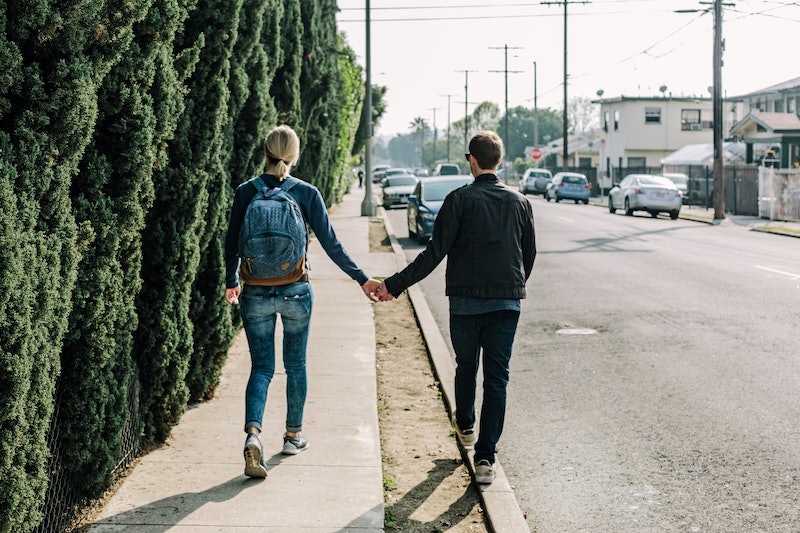 You only need to get burned once before you understand that the stove is hot. It seems, however, that relationships are the exception to this law of logic. No matter how many times we get burned, we jump back on the heat. It's not because we're stupid — it's because we're optimistic, because we're hopeful, even though at times we might seem cynical and beyond repair. Perhaps it's the fault of Hollywood, perhaps it's the fault of every love song or poem ever penned or crooned, but we can't stop seeking love, no matter how much it burns us. Because we're not built that way, we're built with love-seeking endurance.

And while we might not be walking around with third-degree burns all the time, they're definitely there. Our scar tissue is just under the surface and doesn't take much investigating to find. There's a certain hardness just under our skin. It's a result of trauma, of disappointment, rejection, longing, betrayal. But it's still functional. We're still functional, we're not broken just because we've been hurt by love. We're not callous, just cautious. And most of us, don't even know that we're we're giving off subtle signs that scream "I'M SCARED" to our potential partners. But they notice more than you think. Here are 11 things cautious people do in relationships.

They Control The Pace

When you've been in a relationship that crashed and burned, you're going to be very skeptical about fast-moving relationships in the future. A part of you will always try to control the pace of things and cancel dates when things get too regular. You want the time to figure out if it's something you want before you're stuck in it.

They Keep Their Walls Up

You might not mean to, but your scar tissue definitely creates a barrier between your heart and your voice. You have trouble expressing the way you feel when you meet someone new because you're not exactly sure what your feelings are. Sometimes it takes losing that person to realize you wanted them around. It's a self-defense mechanism, but it only keeps people away from you — which deep down, is not what you want.

They Get Shy Around Intimacy

For you, getting intimate means more than sex. It means you're sharing your whole self with someone, and with that comes the implicit understanding that you trust them and want them to stick around. You probably prolong this step as much as possible while you try to make your mind up about the person.

They Keep Their Options Open

It's not that you have a wandering eye — it's that you're scared to put all of your eggs into one basket. You want to keep other people on deck, because you're waiting for your current fling to end before it's begun.

They Step Back When Things Get Intense

When you start to develop intense feelings for someone, you find a way to step back and reduce the intensity. A boiling pot scares you, but a simmer you can handle. It's not that you don't like where it's going, it's that the more invested you are, the more you have to lose. You're tired of losing.

The second you have something you like, you're scared you're going to lose it. You've lost it before. While your friends are skipping through the field and licking ice cream and kissing puppies to celebrate their newfound love, you're at home having an anxiety attack because you have feelings.

They Dig For Answers

It's not your fault you're paranoid. You can't help it after all you've been through. When you first meet someone and you're a cautious dater, you search the internet high and low, trying to find any evidence to validate your skepticism. But if you dig too hard, you'll find something. It's best to let people reveal themselves to you at their own speed — criminal records not included.

You might be the last person to know that you're a cautious dater. You probably get called out by a lot by people who are intuitive and can tell you're holding back. You probably have a long list of excuses you resort to because it's easier to do that than tell the truth about your romantic baggage.

They Compare Their Date To Others

You can't help but worry that every relationship is going to be a negative repeat of the last one. You unintentionally compare everything your current partner does with your last one. You're trying to look out for yourself, but you're giving someone an unfair filter they haven't deserved.

They Lie To Themselves

You want to tell yourself that you're giving everyone and equal and fair chance, but the truth is, you're not. You're holding back your feelings and repressing your instincts out of fear. Once you stop lying to yourself about how your past relationships have affected you, you can start being less affected by them.

They Manifest Their Own Fears

If you keep pushing someone away because you're worried they're going to leave you ... they're eventually going to leave you. Not for any other reason than the fact that you help yourself back too much and didn't give them a fair chance to love you. If you worry about someone too much, it will become a self-fulfilling prophecy. Don't get in your own way! It's OK to approach with caution, but eventually, you have to let someone in.