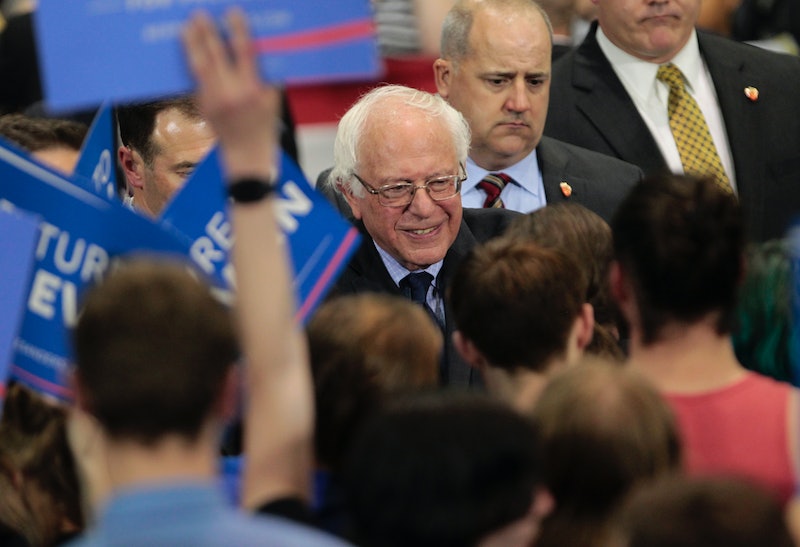 With Hillary Clinton's near-sweep of the Acela Primary on Tuesday, the hopeful light of the Bernie Sanders campaign is starting to dim. Only a handful of primaries remain and Sanders has an increasingly unlikely amount of delegates to win, so it seems like Sanders' probability of winning the nomination is whittling down to nearly nonexistent. It is still possible for Sanders to win the nomination by delegates alone, but some pretty stunning upsets or a last minute Hail Mary pass will be necessary in order for that to happen.

Technically, it's still possible for Sanders to get the nomination by triggering the automatic win rule at 2,383 delegates. According to NBC News, Sanders has to win 64 percent of the remaining pledged delegates in order to take the majority of that category, and must get 80 percent of all remaining delegates, including the superdelegates, to take the nomination automatically. There are still about 150 superdelegates who have not yet endorsed, and most have probably hesitated for this long waiting to see how the primary elections play out. If Sanders can get a competitive portion of that 64 percent or pledged delegates, he may have a good chance to earn a chunk of the remaining superdelegates as well.

Yet, unfortunately for anyone who's still feelin' the Bern, it just doesn't seem like something that's going to happen. Clinton is polling ahead in most of the upcoming primary states, and all of the delegate-rich ones, like California and New Jersey. Even if Sanders can pull off wins, it would be a miracle if the margins were wide enough to hand him the delegate lead. Looking back to 2008, President Obama was already way ahead of Clinton around this same time in the election cycle and Clinton was the one refusing to drop out of the race, as Sanders is now. Of course this isn't a road map, but the primaries are similar enough to see the likelihood of historical repetition. At this point, Sanders just isn't going to be able to pull off the win.

So if an automatic win for Sanders is ruled out, that leaves two possibilities — an automatic Clinton nomination or a contested convention. An automatic Clinton nomination seems the more likely between the two at this point. Clinton is just over 200 delegates away from the threshold, and she needs to win just 20 percent of all remaining delegates to get there. However, if Sanders can stage a successful coup and get enough delegates on his side, the first ballot at the convention could be inconclusive, at which point the delegates become unbound. It's extremely difficult to say what could happen in the free for all of a contested convention, but as of now, it seems like Sanders' best chance at taking the nomination.

Yes, it's possible that Sanders could win the delegate race and automatically earn the nomination, but it's really possible in the sense that it's possible I could win an Oscar this year. Sanders' path to victory is now almost completely obscured, but his best way forward is counting on a contested convention.