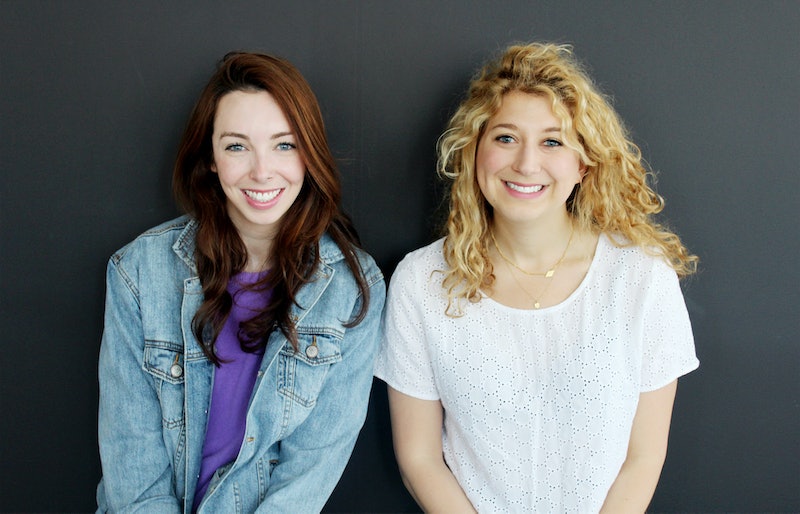 Three months ago, we were sitting at a bar in Brooklyn complaining about our jobs. We had no idea this all-too-common conversation would lead us to quitting those jobs and starting our own business. We’ve known each other for eight years, since meeting as magazine interns in college, and, though our career paths never overlapped, we had always wanted to work together. Our belief that teen girls deserve to feel informed and empowered inspired us to start Clover, a daily email newsletter and community for high school and college-aged girls.

After getting a thousand signups on the first day alone and landing cosigns from The New York Times and Women’s Wear Daily , it’s been a whirlwind. Two months in, we’re finally able to take a step back and reflect on what we’ve learned so far (but trust us — we know we have many, many more lessons on the way).

1. Ask for advice and feedback from everyone.

Get insight from everyone you cross paths with. But also, know when to take it, when to ignore it, and when to file it away in your brain. (Advice you hear early on might become much more relevant once you’re a few months or even years in.)

Everyone has an opinion. And while not everyone’s opinion is worth taking, it’s all worth listening to. When we first had the idea for Clover, we talked to friends, mentors, and teens — so many teens! — and the reactions we heard both reaffirmed a need for something like Clover and also shaped our final product. Obviously feedback from our target audience is incredibly valuable, but thoughts from people very much outside our demographic (sorry, mom!) have been beyond helpful, too.

2. Don’t let your ego get in the way of getting help.

At first, we were hesitant to ask for help or advice — or really, anything from anyone. You know that friend who’s constantly begging for favors with nothing to give in return? No one wants to be that friend (and no one wants to help that friend, either). But we quickly learned that when you’re starting a business from scratch, there’s no shame in admitting you could use a little help.

Always be grateful (and get really good at writing thank you notes). Don’t let your pride stand in the way of asking for things, whether it’s guidance or introductions or, because a start-up is a start-up, money. We’ve been shocked at how willing people are to help us. More than once, we’ve looked at each other and wondered, “Wait...why are they doing this?” because people are so generous with their time, expertise, connections, and everything else you could imagine. They say there’s no such thing as a free lunch, but we’ve discovered it’s sometimes just that. Of course, always check the fine print before you accept that million-dollar check (and make sure you’re not unknowingly giving away a percentage of your company first).

Speaking of money, make sure you have some before you quit your job. Since we’d both worked in the industry for six years, we were at a place in our lives where we felt financially OK to jump into something without having the promise of a paycheck for a few months. That didn’t make it any less terrifying. But we’d reached a point in our careers where we were ready for something new — really new, not just a job promotion. So while the risk did mean giving up stability for a while, it was worth it. It’s also worth mentioning that we’ve both been freelance writers in the past, so if things got tough, we could always supplement our savings (or lack of) with side gigs.

4. Don't start your own business in hopes of working fewer hours.

If you’ve worked in an office for years and been at the mercy of someone else’s hours, the independence allowed by starting your own business will feel incredibly freeing. At least at first. While you will be setting your own hours and scheduling your own meetings, it’s not like you’re going to be able to swing a luxurious 2 p.m. spin class every afternoon (if you can even afford it, that is). When you’re your own boss, you’re also the only one accountable. Your business is only as successful as you are. And if you care as much as you should, it’ll take over your life a little. Ideas will pervade your thoughts during yoga, sidetrack you mid-dinner with friends, and keep you awake at night.

5. Your business goes so far beyond the product itself.

With a combined 12 years in the digital media industry, we assumed that making a daily newsletter for teens would be no problem. And it’s not, really! However, the newsletter itself only takes a few hours of the day. What we didn’t realize just a few months ago was that our product is only a tiny component of our company. There’s all this extra — but extremely important — stuff, like forming an LLC, filing a trademark, getting a good lawyer, and other headache-inducing steps that go so far beyond the actual product or service you’re selling. After you’re willing to devote the time, energy, and patience to squaring these additional things away, you’ll have a better capacity to focus on what you started the business to do.

6. You're never too good to be your own customer service department.

Being an entrepreneur means you’re automatically responsible for everything in your company, top to bottom—regardless of whether or not it’s your expertise. One lesson that we learned when starting Clover is that readers and customers are more likely to be loyal when they can put a face to a name. We make a huge effort to respond to every single email we receive (we get dozens a day from teens). Every month, we host a Skype video chat with our brand ambassadors. We thank people for reading, and address any concerns they might have. As a two-person business (for now, anyway) we’re the backend developers, the PR people, the writers, the editors, and the customer service reps. Having this direct line to our readers doesn’t only help us to build a better brand via all their feedback, but it also reinforces Clover’s overarching mission: to empower, inform, and actually listen to this extremely powerful demographic.

Hustling is a job requirement for pretty much any media gig, but when you’re trying to build a startup? You’ve got to be absolutely shameless. A few weeks before we launched, we blasted an email to 500-plus industry and personal contacts, letting them know about Clover and asking them to sign up. We received plenty of positive feedback, and a few negative responses (“Teens don’t use email, so this won’t work,” was a common reply), but simply getting on their radar is crucial.

You can’t take the haters’ comments to heart, no matter how difficult that may be. As long as you believe in your product and sell it well, we’ve found that most people are willing to get behind our mission. We reserve Fridays — the only weekday we’re not working on a newsletter — for meetings with literally anyone and everyone who might be interested in our mission. We’ve blind-emailed hundreds of people by now, from tech CEOs to nonprofits to possible advertisers, and asked for meetings. After dozens of office visits, we’ve learned that taking the time to meet up in person makes them more likely to listen to your pitch, truly understand your product, and respond the next time we might reach out for help or advice.

Having your own business is all-consuming in a way that we didn’t even know was possible. It’s so emotionally exhausting that it’s easy to work around the clock. But one lesson that we’ve learned (maybe the hard way) is that you need to take breaks, not only for your own mental health but for the success of your company. It’s so tempting to get caught up in the daily to-do list that even taking a 15-minute walk or going for a bike ride can clear your head in a crazy-effective way. Finally, always keep the larger mission in mind — for us, it’s why we decided to quit our jobs and start this publication in the first place. Reminding yourself of your lofty goals (ours is to empower and inform teenage girls everywhere) will help you keep going when times get tough.